He is an independent scholar who is also a widely read and highly regarded author.

by Anwar A Khan

The veteran journalist Abdul Gaffar Choudhury went to the UK for treatment of his wife and could not return to Bangladesh for 22 years after the assassination of Bangladesh’s Founding Father, Bangabandhu Sheikh Mujibur Rahman. Chowdhury is a proud Bengali and an even prouder journalist and columnist, a living legend. A superstar in his field, he definitely has firm ties to Bangladesh. An octogenarian, he is a Bangladesh’s born British writer, journalist, columnist, political analyst and poet. He is perhaps best known for writing the lyrics to “Amar Bhaier Rôkte Rangano Ekushe February…” which is the most widely celebrated song commemorating the Bengali Language Movement. It has been regarded by listeners of BBC Bengali Service as the third best song in Bengali. 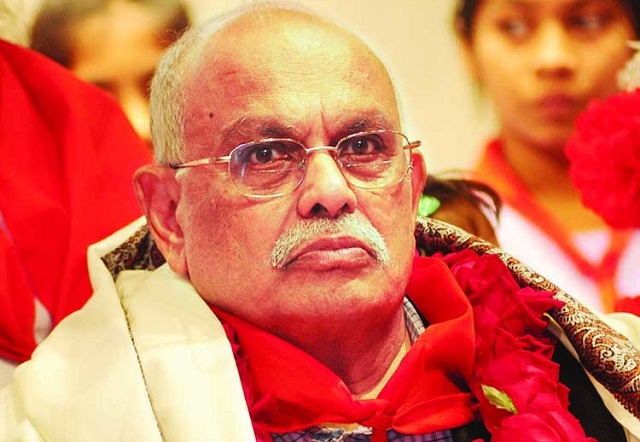 Choudhury worked as a journalist in different national newspapers in Dhaka. During the 1971 Bangladesh’s Liberation War, he worked for Joy Bangla, Jugantar and Anandabazar Patrika. In the UK, he runs a newspaper named ‘Notun Din’. He has written more than 35 five books. Some of his notable works are: “Danpithe Shawkat”, “Chandrodwiper Upakhyan”, “Nam Na Jana Bhore”, “Nil Jamuna”, “Shesh Rajanir Chand”, “Polassey Thekey Dhanmondi”, “Bastobotar Nirikhey” … He lives in London from where he regularly writes columns for Bangladesh’s national dailies, in Bengali newspapers of Bengali community in the UK and in a daily newspaper in Kolkata.

He has produced a film on the assassination of Bangabandhu Sheikh Mujibur Rahman called ‘Polassey Theke Dhanmondi’. The multitalented personality has received many awards for his immense contributions to journalism and literature, such as, Bangla Academy Award, Ekushey Padak, UNESCO literary Award, Bangabandhu Award, Shanghati Lifetime Achievement Award Sadhinota Padak, Manik Miah Padak, PIB-Sohel Samad Memorial Award…Former Education Minister Nurul Islam Nahid said, “Abdul Gaffar Choudhury, a veteran journalist and columnist, is a living legend who has been working for the people’s welfare throughout his life. He has enlightened and inspired us and showed the ways.” He is a classy writer, who has written relentlessly for the country and its people. His illustrious song about Ekushey February is not only played in Bangladesh but also all over the world.

He is not a mere individual only. He is a formidable institution. Gaffar Chowdhury is one of the few personalities who have been involved in almost all historical events of Bangladesh.

Eminent journalist and columnist Syed Badrul Ahsan has aptly said of him, “Gaffar Chowdhury speaks for all of us. In fact, he has spoken for all of us. We must now speak up for those whose contributions to national history have systematically been vilified by the forces of counter-revolution, by those who have cleverly and in subtle manner been promoting communal politics through the spurious theory of ‘Bangladeshi nationalism’. It is time to put ‘zindabad politics’ in a straitjacket.” Remember, he is the most insightful and inspiring columnist of our generation.

His mission’s success hinges on the true spirits of our glorious Liberation War of 1971 when he walks calmly through enemy fire to flip a switch, reprogrammed imperial robot, when he sacrifices his safety to block an attack against his comrades. Where all the main characters live to celebrate their success; perhaps, the change reflects our own nation’s less optimistic view about how easily battles can be won. On a scale of history, his columns, indeed, are re-imagining human possibilities… for which Bangladesh was created in 1971. Gaffar Chowdhury’s columns will always inscribe Bangladesh’s historical memories.

Each day of the enjoyment of freedom for all of us is the ultimate expression of gratitude to all people those who like them fought to a standstill against human oppression articulated in the discourse of Abdul Gaffar Choudhury’s columns. Our leaders’ legacies find voluble or communicative expression in the centrality of the idea that his life radiates through his articles; the idea that we have the ability to create a new form of life. A new form of life anchored on unity, democracy, secularism and justice. These principles, Chowdhury, has been living for all his life, are not just hollow statements. They are foundational to a new form of life.

He used to hold on to the immutable laws of history in so far as they are prescriptive of what is most desirable for human life in Bangladesh. He has taken exception to the current the culture of feeding frenzy, moral corruption, societal depravity, political dissolution, the gross and sleaze enveloping human mind that would put to shame even some of the vilest political orders known to human history. Once again, here is to the human possibility! Just when a dispassionate observer could have thought the ravages of age have deprived him of his trademark intellectual vitality, Chowdhury let rip in his vintage moral mode.

Yet, he has remained forever measured, a towering moral icon who would not compromise with anything outside the framework of superior human values. In this connection, he was once again reaffirming the courage, humility, selflessness and generosity of freedom fighters within the cultural framework of self-reflection. Indeed, a measure of self-reflection is needed if human civilisation is to endure. He feels the current democratic government is a pre-condition to the sustenance of our democracy and good governance. For him the mainsprings of a cultured politics are the practice of truth-telling; being honest, expressive and unambiguous in public discourse.

He believes that a free media culture is vital to the growth of democracy, and support for initiatives that drive such a culture is a priority for the country. We are proud that he still continues a fearless tradition of exposing wrongdoing in the public interest. From corruption and governance issues to health, the environment and poverty, we hope he will be working to turn the dross of greed and self-interest into fertiliser for democracy. He is one of a number of initiatives aimed at improving the quality of all genres of journalism in the country from a far-flung country where he has been residing.

Chowdhury is a prominent Bangladesh’s scholar, writer and specialist in political historical studies. His articles have been describing as an appeal to people of Bangladesh to respect their cultures, values, and traditions and take a firm stand against alien ideas that pollute our minds and undermine the country. He contends that true scholarship requires rigorous intellectual discipline and entails objective enquiry and analysis of facts and evidence including admitting failures and shortcomings, a position he forcefully articulates in his works.

He is an independent scholar who is also a widely read and highly regarded author. He responds by saying that he is just an ordinary citizen of Bangladesh, like tens of millions of others, deeply concerned about the plight of his country for being ruled by some unbridled military dictators and their unsavoury lieutenants for a long time.

His experience also inspires his thinking regarding Bangladesh and its relationship to the Western world, which has led to several academic works dedicated to the subject. He writes about Bangladesh as a whole in such a way as to suggest that he possesses not only a keen understanding of the way things are, but also a deep understanding of the way they should be. In fact, as the years have passed, and as those early optimistic moments after the true spirits and of our Independence War of 1971 have slipped away, he has taken it upon himself to write about why Bangladesh has fallen short of its vision because of some staid and unabashed so-called politicians.

He has become disillusioned with the leadership on the realm of the country’s politics through the years, filled with broken promises, and not long after the country won independence because of usurping of the state’s power by some debased military dictators and their mango-twigs.

He also strongly admires PM Sheikh Hasina as a political leader of the people like her father and contends that among the new breed of Bangladesh’s leaders, she has shown great promise to build up Bangladesh prosperously. By his sharpened writing skills…he still holds those views today, crystallised into an ideology for a new Bangladesh’s liberation and forcefully articulated the same things in his writings.

I still remember his courageous pronunciation which he made in an interview with a renowned Bengali weekly magazine, Bichitra (now defunct) after Bangabandhu’s brutal murder in 1975, “I do not want to return to the country of illiterate soldiers. Whenever I shall return, I shall return to the country as a triumphant man (Ashikhito sepoyder deshey phirey jetey chaina, Jey din phirbo, Sheydin bijoyir beshey phirbo).” Chowdhury is now very ill and bed-ridden. With deep-chested, I remember this far-famed polymath of our country’s history. I also salute him and pray for his early recovery from illness.

The writer is an independent political analyst who writes on politics, political and human-centred figures, current and international affairs