Experts are of the opinion that the Taliban could be successful but not in blinking of an eye; things could take time.

Some are happy and some are grieved at US’ decision of pulling out its forces from the Afghan land but at the same time some are yet not clear whether to be happy or to be sad on this ‘epoch-making’ decision. Definitely the decision is going to change the whole future scenario of the war-torn Afghanistan, might be in a positive way and might be negatively. But one thing is very much clear that things would take a long time in permanent settlement. At present a tug of war between the Afghan government and the Taliban is simply making the situation over there more horrible and more atrocious. The Taliban have to fight not only the Afghan government but also the veiled supporters of US in Afghanistan. Agents of the R&AW are also there to counter Taliban with all their zeal and zest, even the Ashraf Ghani government is doing all the best possible for its survival.  In short, situation there is not very favourable for the Taliban but not in control at the Ashraf Ghani government at the same time. And no doubt this was the situation desired by the US policy makers. 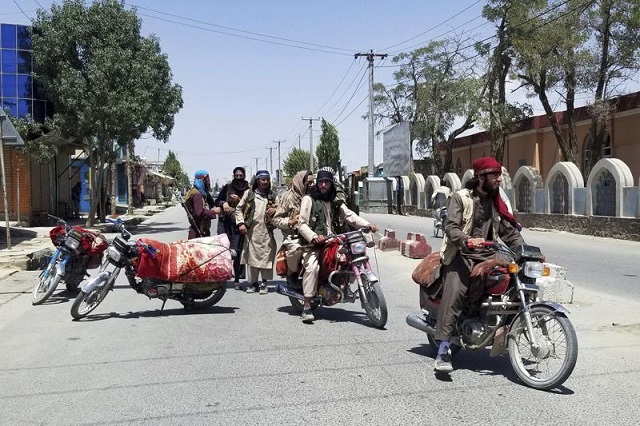 Experts are of the opinion that the Taliban could be successful but not in blinking of an eye; things could take time. There is expected a long tug of war in which it would be very difficult to defeat the Taliban as they are enjoying a very strong support of the local people. Moreover after US withdrawal, they would be having no strong military opposition as the Afghan Army has no professional skill to compete the Taliban. There are reports that many soldiers of the Afghan Army are joining Taliban troops as they think it is in better interest of their country. The Ashraf Ghani government is also aware of the fact that the Afghan Army lacks professional skills and it won’t be a wise step to instigate the Taliban by showing closeness to India at this crucial time. That is the reason that recently on 26 July Afghan Army Chief Gen. Wali Mohammad Ahmadzai cancelled his planned visit to India just because of the possibility of offending the Taliban leadership. The purpose of his the three-day visit to India was to explore ways to deepen bilateral military ties in the backdrop of the Taliban carrying out offensive operations across Afghanistan following the withdrawal of foreign forces but according to an official of the Afghan Embassy, “The visit by our Army Chief has been postponed due to intensity of war and Taliban’s increased assault and offensive.” Reports say that Gen Ahmadzai had plans to hold wide-ranging talks with top Indian military brass including his counterpart Gen. MM. Naravane and National Security Advisor Ajit Doval.

However there is another question too; would the Taliban-control be fruitful for the people of Afghanistan?  It is a bitter fact that for the last three decades, Afghanistan has been ‘misused’ rather exploited as a battlefield of interests for so many western countries. In the name of war on terror, a very fertile and minerals-enriched country has been changed into debris. No doubt India had always been a facilitator to all those who joined hands together with one another in ‘excavating’ the Afghan lands. It has been in media-analysis that the Taliban being ‘sons of the soil’ could never forget the atrocities and cruelties of the NATO forces and the US troops, done against the real land-owners. Apprehending the ‘danger’ of Taliban’s coming into power after US’ withdrawal from Afghanistan, India has already started planning to bring a shift in its policy towards the Taliban. According to Aljazeera, ‘in early June, the Indian media reported that New Delhi has started talking to certain factions and leaders of the armed group against the backdrop of the withdrawal of the United States forces from Afghanistan. A few days later, India’s Ministry of External Affairs also confirmed these reports, stating that they were in touch with various stakeholders.’

India is well aware of the fact that the Taliban regime could never be very pleasant and encouraging for India as the Taliban claim to struggle for supremacy of the Muslim community. In case, the Taliban come into full power with all authority, the ball would not remain in India’s court. The Taliban would never honour the deals already done between the Ashraf Ghani government and India. It is also a fact that India has invested a lot in Afghanistan specifically in the last ten years. This investment is mainly in construction of roads, dams and infrastructure projects. Other than an economic activity, this investment provides India an opportunity of sending terrorists to Afghanistan in guise of laborers and other technical staff. Control of Taliban on Afghan affairs would simply deprive India of this golden opportunity. The fact of the matter is that Afghanistan could never move to a better direction unless foreign interference in Afghan affairs is not eliminated. Peace and prosperity in Afghanistan could be a desire of countries like Pakistan, Iran, Russia and China but for US and India the desire might be otherwise. Let us wish our Afghan brothers an insurgency-free tomorrow.