The humiliation of the United States (US) is, indeed, far greater than what the erstwhile Union of Soviet Socialist Republics (USSR) faced at the hands of the Afghan Mujahideen, when the USSR was forced to leave Afghanistan in 1988-89.

You have the watches, we have the time ~ Afghan Proverb

In the evening of August 15, 2021, the Taliban captured the Presidential Palace in Kabul. Declaring the ‘end of war’, Taliban’s political office spokesperson Mohammad Naeem stated,

Today is a great day for the Afghan people and the mujahideen. They have witnessed the fruits of their efforts and their sacrifices for 20 years. We have reached what we were seeking, which is the freedom of our country and the independence of our people. Thanks to God, the war is over in the country. 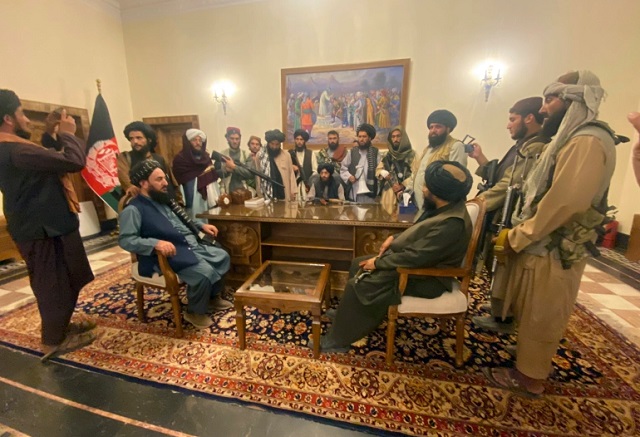 Meanwhile, incumbent Afghan President Ashraf Ghani fled the country, reportedly to neighboring Tajikistan. In a Facebook post, Ghani claimed, “To avoid bloodshed, I thought it would be better to leave.” Commenting on Ghani’s ‘escape ‘Naeem said, “even those close to him did not expect it,” adding “We are ready to have a dialogue with all Afghan figures and will guarantee them the necessary protection”. Earlier, on August 14, two of Afghanistan’s regional strongmen, Atta Mohammad Noor, the former governor of Balkh Province and the ethnic Uzbek leader Abdul Rashid Dostum, fled to neighboring Uzbekistan. The duo fled after the fall of Mazar-i-Sharif city.

The ouster of another “puppet Government” in Afghanistan within months of the start of the final drawdown of international troops from Afghanistan (withdrawal began on May 1, 2021) demonstrates the failure of ‘superpowers’ to impose their will on Kabul, with Mohammad Naeem asserting, “We do not think that foreign forces will repeat their failed experience in Afghanistan once again.”

The humiliation of the United States (US) is, indeed, far greater than what the erstwhile Union of Soviet Socialist Republics (USSR) faced at the hands of the Afghan Mujahideen, when the USSR was forced to leave Afghanistan in 1988-89. The USSR was confronted with a proxy war backed by the combined Western powers led by the US. US has lost to the Taliban backed by Pakistan alone..

Referring America’s disgrace, US Senate Republican leader Mitch McConnell argued that “terrorists and major competitors like China are watching the embarrassment of a superpower laid low.” While he blamed US President Joe Biden for what he called a “shameful failure of American leadership,” Biden was only realizing what has been in the making for over a decade, certainly since Obama’s incoherent “AfPak policy” of 2009, which initiated the trend of announcing withdrawal dates for US and coalition forces, signaling to the Taliban and their Pakistani backers that they simply had to wait their adversary out. As had been noted then:

President Obama’s AfPak strategy overwhelmingly concentrates on unrealistic short-term targets and goals, based on irrational settlements with the most dangerous elements in the region – the Pakistan Army, the ‘moderate Taliban’, and a powerless and unreliable political leadership in Pakistan. At the same time, the setting of hard deadlines for US withdrawal, both in Iraq and Afghanistan, encourage an extremist calculus within a protracted war framework that simply seeks to exhaust the political will of the Western leadership to remain engaged in the war. It is only when the US and the West accept and operate within the protracted war paradigm that a rational policy framework can emerge.

Despite the many brave announcements of policy since then, little changed in the more than a decade that followed. The Western alliance was unwilling to commit to an open-ended engagement in Afghanistan, failed to define clear strategic goals, constantly sought a craven peace with the Taliban, and, crucially, knowingly ignored Pakistan’s malicious actions that were, throughout, the very crux of conflict in Afghanistan.

However,the US political and defence leadership – indeed, the world leadership – was caught unawares by the sheer pace of the developments on the ground in Afghanistan. On August 11, just four days before the final takeover of Kabul by the Taliban, an unnamed US defence official cited US intelligence as saying that Taliban fighters could isolate Afghanistan’s capital in 30 days and possibly take it over within 90 days. The new assessment of how long Kabul could stand purportedly accounted for the of the Taliban’s rapid gains in the preceding months.Moreover, the official further asserted that “this is not a foregone conclusion” and that the Afghan Security Forces could reverse the momentum by putting up more resistance.

But there was not an iota of doubt that Taliban would eventually capture power. Indeed,on April 22, 2021,General Frank McKenzie had warned that Afghanistan’s military “will certainly collapse” without some continued American support once all US troops are withdrawn..

Despite this, and despite the Taliban’s contemptuous disregard of its commitments under the Doha Agreement of February 2020, the US failed to provide the necessary and continued support, even as Kabul was continuously pressurized to adhere to every nicety of the agreement to which it was not even a party. The release of around 5,500Taliban prisoners had been conditional on the Taliban’s commitment that they would not rejoin the fighting – but an overwhelming majority did so immediately. Instead of holding the Taliban to account, the US continued to urge the Ghani Government to release an even larger number of prisoners than had been agreed upon at Doha. Moreover, despite the Taliban’s commitment to reduce violence in Afghanistan, the Western powers never sought to hold it to account as Taliban violence escalated across the country. Eventually, as the final drawdown commenced on May 1, the Taliban rampage became unstoppable, even as the well-established devices of bribery and opportunistic shifts of loyalty – the essence of the Taliban’s rapid capture of power after 1993 as well – saw province after province fall like ninepins.

Unlike 1993, however, not even the pocket of resistance in the Northern areas has been left intact. The Taliban has successfully pre-empted any consolidation of ethnic resistance in these areas by bringing large areas on the North under its sway over the past year, excluding the possibilities of leverage or indirect intervention through ethnic minority proxies in the foreseeable future.

Despite the catastrophic consequences that were unfolding in Afghanistan, and the colossal erosion of America’s ‘super power’ status, the Biden Administration held stubbornly to spinelessness, ‘honouring’ the deal to leave the country, despite the Taliban’s manifest disdain for every clause of its own commitments.

The biggest and most persistent blunder of US policy has been the reliance on Islamabad. In these final stages, Pakistan’s Inter-Services Intelligence, on whom the US relied to help rein in the Taliban, at least for a few months to help the US secure an ‘honorable exit’, was in no way going to miss the opportunity to install its proxy in Kabul, before any outbreak of civil war or consolidation of effective resistance which many experts predicted or hoped for. It needs to be emphasized that the Taliban has entered the Presidential Palace even when almost a month is still left for Washington’s declared drawdown deadline of September 11, 2021.

The US has now been forced to send additional troops to secure the evacuation of its own citizens in the country in scenes that are reminiscent of the chaotic flight from Vietnam. Worse, as Matt Zeller, a US veteran of the Afghan war, points out, some 44,000 Afghans who helped Washington during the conflict were outside Kabul and required urgent evacuation.”This is a disaster of epic proportions,” he said, warning that Afghans who helped the US military may now be “hunted down and systematically murdered by the Taliban.”

Meanwhile,the US along with 65 countries released a joint statement calling for facilitation of the departure of foreign nationals and Afghans who wished to leave the country. With reports of civilian slaughters coming in from Taliban held territories in the Provinces, the United Nations Secretary-General Antonio Guterres issued a statement imploring the Taliban to “exercise utmost restraint in order to protect lives.”

Indeed, almost after 20 years since their invasion of Afghanistan, the US and its allies have once again abandoned Afghanistan to the mercy of the Taliban. At the time of writing there is chaos everywhere in the country.

Meanwhile, the Taliban posted “the latest developments and [its] advancements” in Afghanistan, on its website on August 15. The post sought to reassure the population that “no one should worry about their life.” The Taliban also “announced and amnesty” to “All those who have previously worked and helped the invaders, or are now standing in the ranks of the corrupt Administration of Kabul.” The “Islamic Emirate” has also urged “Those who have recently been affected by the enemy’s propaganda, displaced internally, or migrated to foreign countries, whether official or civilian, they should return to their homes and areas…” The “Emirate” has also sought to “assure all our neighbors that we will not create any problems for them” or for “diplomats, embassies, consulates, and charitable workers, whether they are international or national.”

There has been much hopeful commentary that “Taliban 2.0” is an improved and much-civilized version of the Taliban that ruled the country between 1996 and 2001.The Taliban, however, remain unshakable in their commitment to establish “Islamic rule”, with their brutal interpretation of Shariah as the law of the land. In various statements, Taliban leaders haver reiterated that this includes the restoration of punishments such as stoning to death and the cutting off of hands for various crimes. The population segment most terrified by current developments are the women and girls of Afghanistan, who had secured a measure of freedom and education, and many of whom had attained prominent positions in society. Early indications suggest that there is little possibility of such freedoms and roles remaining accessible to women in a Talibanized Afghanistan.

It is much too early to assess what the regional and global outcome of the Taliban’s takeover in Afghanistan will be, but one thing is certain, the ‘great game’ is once again afoot. The ‘victory of Islam’ against another superpower will surely provoke significant radicalization and may catalyze terrorism in theatres across the world. But uncertainties persist. Those who are celebrating the Taliban victory in Afghanistan have their own fears and insecurities; those who are on the losing side will seek opportunities for recovery and revenge. Afghanistan’s trials and tribulations are far from over. The world has changed, of course; but it remains much the same.

The writer, Research Fellow, Institute for Conflict Management in India