A corrupt government becoming more and more distant to the people, many of whom were in poverty, and the US and allies seen as protecting the corrupt, provided ample ammunition to the Taliban to establish themselves throughout the country.

The world needs an Emperor with full clothing to counter the increasing stridency of China. Unfortunately, the US has been progressively shedding its clothes beginning perhaps with the defeat in Vietnam. The many military incursions that followed, all basically abject failures in improving the lives of the people of the countries so invaded, has shown that US objectives have been flawed, and the execution of such objectives, even worse. 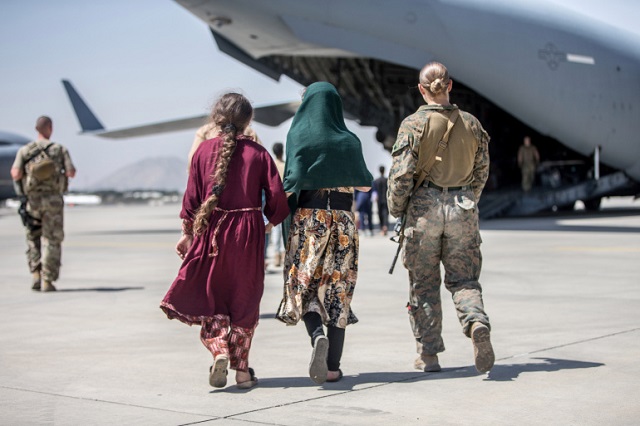 One wonders however whether there is a dichotomy when it comes to these objectives. Were they meant to help the countries so invaded, were they purely to serve US interests, or were they to serve the interests of a powerful lobby within the US which has profited hugely on account of these futile military adventures. The latter wants conflict, war, instability, corruption at the highest levels in the countries invaded in order to beget even more conflict and war.

Afghanistan today is nearly 100% dependent on foreign aid to run the country, as it was 20 years ago. Reports say that “Healthcare in Afghanistan is provided by over 3,000 health facilities found throughout the country. The decades of war and neglect by the world community has destroyed Afghanistan’s already-poor healthcare system. In recent years, however, the country had somewhat improved its healthcare system. Life expectancy rates are among the lowest in the world and 25% of children die before their fifth birthday. In 2019, life expectancy at birth for women in Afghanistan was about 66.39 years, while life expectancy at birth for men was about 63.38 years on average. Lack of basic health care and malnutrition contribute to the high death rates. Afghanistan has the second highest maternal mortality rate in the world”.

UNESCO says that Currently, over 10 million youth and adults in Afghanistan are illiterate. However, it also says that since 2016, the country has made significant progress. While in 2016/17 the literacy rate was at 34.8 per cent, the UNESCO Institute for Statistics recently confirmed that is has now increased to 43 per cent. However, other reports say it’s around 28.1%. (https://www.infoplease.com/world/country-statistics/lowest-literacy-rates)

As regards the economy of Afghanistan, Wikipedia says that while there have been improvements over the last few years, it is still described as follows “Despite holding over $1 trillion in proven untapped mineral deposits, Afghanistan remains one of the least developed countries in the world. Its unemployment rate is over 23% and about half of its population lives below the poverty line. Many of the unemployed men join the foreign-funded militant groups or the world of crime, particularly as smugglers. The Afghan government has long sought foreign investment in order to improve Afghanistan’s economy”

The statements made by the US and its allies that they invaded Afghanistan to prevent it from becoming a haven for the Al Qaeda terrorist movement and not for the benefit of the Afghan people seems clear when one looks at the above statistics. A question can be asked legitimately by the people of Afghanistan whether the price they paid for a decision they had no input or a say, was worth it, in getting the Taliban out of Afghanistan and for them to come back 20 years later, reportedly after spending some 2 trillion dollars over this period with not much to show as an improvement to the lives and livelihoods of ordinary Afghans.

No doubt corruption and mismanagement has been one of the biggest contributors to the lack of trust and confidence the people of the country had with their politicians and government officials.  So called war lords from provinces entered Parliament and some became ministers.

A corrupt government becoming more and more distant to the people, many of whom were in poverty, and the US and allies seen as protecting the corrupt, provided ample ammunition to the Taliban to establish themselves throughout the country.

Although there was increasing freedom for women during the past 20 years, in a country with high illiteracy, it is possible that many Afghan men may have been supportive of the Taliban as they too were not culturally supportive of freedom for women. The younger, more educated, urban based men may have been supportive, but they were a minority. The US, its allies and the Afghan government they propped, were not succeeding in winning the hearts and minds of people, and it was a matter of time before the Taliban took over.

The issue before the US, NATO and Allies and what is called the “free world”, is not just Afghanistan. It is the situation where this group has shown its impotency in being able to halt the march of the not so free world of Islamic extremists, terrorist groups intent on achieving their objectives via violent means on the one hand, and the rising belligerence of China on the other hand.

In Buddhist philosophy, the doctrine of dependent origination or “Patticca Samuppada” underpins ongoing human existence. It is about cyclical consequential thoughts and action that follows from present thoughts and action. This is a very simplified statement, but it is just that simplicity that has a bearing on some of the reasons for conflicts arising out of the battles between the “free world” and the “not so free world”.

While the value of democracy, freedom and justice, and law and order existing or should exist in a society that has the fundamentals mentioned is not in question, it is perhaps pertinent to ask whether such societies have been as inclusive as they have been portrayed to the world. It is also equally pertinent to ask whether social and societal inequities and inequalities, exploitation of the less fortunate by the more fortunate does or does not occur in such countries, and what consequential actions follow as a result of it. Do the structures and systems in such countries have avenues for the less fortunate, affected people to overcome feelings of helplessness?

People who are affected, and who do not feel the systems are able to address their situation, could react in many different ways. Some may just accept it, some may strive to find ways and means of overcoming such situations, and some may do so using methods that are not conventional and outside the norms of the societies they live in. Amongst these different groups, there would be fertile ground for extremist leaders, using tools such as extremist religious interpretations, to recruit such disgruntled people. These could be consequential actions arising from the mental state of some people facing helplessness and hopelessness in societies. Poverty is rife in many democratic countries and contributes significantly to the rise of extremism.

GSDC Applied Knowledge Services in a working paper from Stanford University’s Centre on Democracy, Development and the Rule of Law suggests that “the obstacles to the elimination of poverty are largely political. Poverty is generated and reproduced by power disparity and abuse. The enduring reduction of poverty requires a broad context of good governance, beyond the narrow arena of free and fair elections. The deepest root cause of development failure is bad governance – the inability or unwillingness to apply public resources effectively to generate public goods. Good governance involves the capacity and commitment to act in pursuit of the public good, transparency, accountability, citizen participation and the rule of law. Bad governance prevents the accumulation of the financial, physical, social and political capital necessary for development.

The paper goes on to say that “Democracy should provide a corrective to bad governance by holding corrupt, unresponsive or ineffectual leaders to account and enabling citizens to participate in making policy. The evidence on the relationship between democracy and development is ambiguous, however. While authoritarian rule offers poor prospects for sustained poverty reduction, democracy does not offer any guarantee of good governance. The effectiveness of democracy in reducing poverty depends to a great extent on the type and degree of democracy. Democracy can be seen as having three dimensions: electoral competition, civil liberties and responsible and accountable government”  https://gsdrc.org/document-library/moving-on-up-out-of-poverty-what-does-democracy-have-to-do-with-it/.

Two things are clear from this paper that firstly, democracy could be a very loose term and it doesn’t necessarily serve all people with equal measure when it comes to inequity, inequality, opportunity and it provides safeguards to the less fortunate when through natural occurrences or deliberate acts, the less fortunate and the marginalised are left behind, and secondly, the democratisation experiment of Afghanistan did not work as it was not culturally attuned and facile at best.

The lesson hopefully for the “free world” is to examine how these consequential situations occur, before they occur, and see how they can be avoided or mitigated. These need to be done within historical and cultural contexts in different societies as one rule does not fit all. This is probably the single biggest reason for the failure of US policy of successive regimes as cultural contexts have been rarely recognised by policy makers.

The Emperor cannot wear more transparent clothes to cover its nakedness. The Emperor needs not just different clothes but more importantly, a different mindset to realise it cannot continue to walk around pretending there is no nakedness. This approach must be firstly and lastly, based on giving a helping hand to countries in need of assistance to overcome poverty, to improve their health services, improve education and helping them to stand on their own feet to improve their economies, but within their cultural contexts. Democratisation has to be a progressive exercise and based on conviction, and not introduced allowing   corrupt individuals to further their personal nests. Placing military boots, guns and bombs in countries on the pretext of helping them has to stop, as recent history in Vietnam, Iraq, Libya, and now in Afghanistan, has proven beyond any doubt.