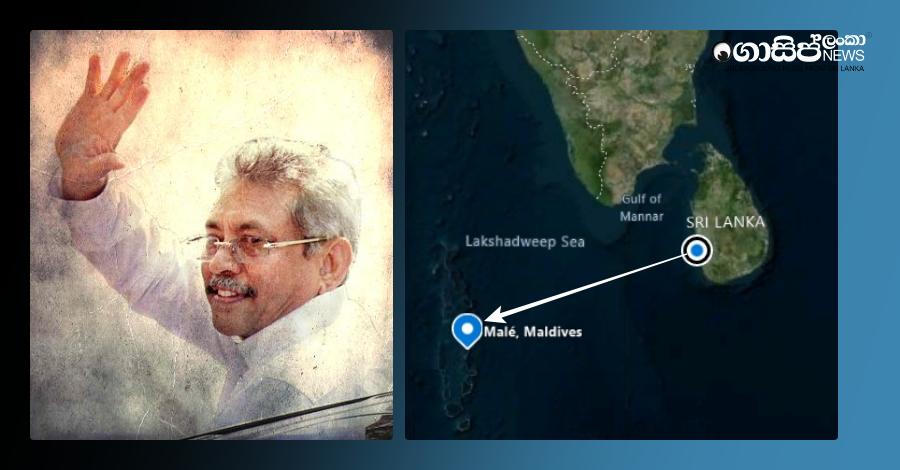 According to foreign media, President Gotabhaya Rajapaksa left for the Maldives in an air force jet this morning. Mr. Gotabaya Rajapaksa has left for the Maldives by the same jet, which arrived at 3.00 am Sri Lanka time today. The Speaker of Mala Island, who is friendly with the Rajapaksa family, has helped him leave the country on this occasion. Immigration officials told AFP that the 73-year-old captain, his wife and security guards were among the four passengers of the Antonov-32 Sri Lankan military aircraft that took off from Colombo International Airport on Tuesday. The BBC reported that Soura Basil also left today.

“Their passports were stamped, and they boarded the Special Air Force plane,” said an immigration official involved in the process. There was no immediate confirmation that Rajapaksa had arrived in the Maldives. The airport authorities also said that due to the confusion regarding permission to land in the Maldives, the plane was held on the runway for over an hour without being able to take off. “There were a few moments of worry, but everything worked out in the end. The plane is scheduled to land at Male International Airport.” An airport official told AFP Gotabaya Rajapaksa, who had made his 5th unsuccessful attempt to leave the country yesterday (12th) afternoon, was told that he could not resign on the 13th as promised until he left the country safely. However,

because he retired at 13 in the morning Mr. Gotabaya Rajapaksa, the 7th Executive President of Sri Lanka, will resign from his position today, Esala Poda (13th). Speaker Mahinda Yapa Abeywardena said on the evening of the 9th that he was informed that the President would resign today, and it was said that the resignation letterhead was given to him on the 11th. Accordingly, the President’s resignation is to be announced by the speaker today (13) in the morning. Prime Minister Ranil Wickremesinghe is ready to be sworn in as President with the announcement of the President’s resignation message by the speaker. Mr Gotabhaya Rajapaksa will go down in history as the President who won with the highest number of votes in the history of this country,

as well as the first and only President to resign before the end of his term. In the presidential election held on November 16, 2019, Mr. Gotabhaya Rajapaksa became the 7th Executive President of the country by obtaining sixty million, twenty-four thousand two hundred and fifty-five (6,924,225) votes and a percentage of 52.25 per cent. On November 18, 2019, Gotabaya Rajapaksa was sworn in as the 7th Executive President in the presence of Chief Justice Jayantha Jayasuriya at Anuradhapura Ruwanweli Mahasaya Precinct. He also served as the Defense Secretary during the reign of President Mahinda Rajapakse. There are allegations that the Rajapaksa company played a big role in winning the war. Still, after the war, it started huge unnecessary projects under the guise of development and engaged in a huge business of making various deals and looting commissions. Because of that, the country went bankrupt. Gotabaya Rajapaksa became the first Sri Lankan President to be ousted by a people’s struggle, and his brother, former Prime Minister Mahinda Rajapaksa became the first Prime Minister to be dismissed.