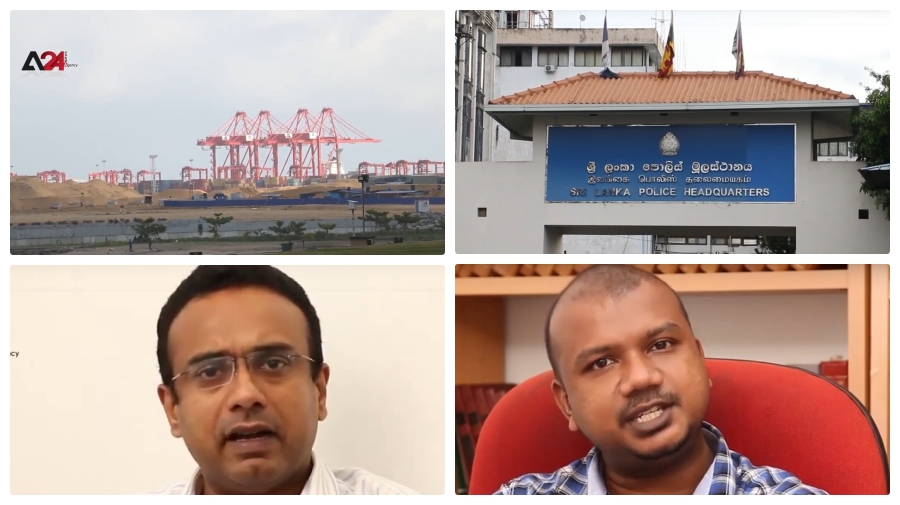 Deputies and activists stated that China continues to control strategic places in the capital, Colombo and that officials in the Sri Lankan government are ready to sell hundreds of acres of the mainland in the capital, the areas of Slave Island and ports to Chinese companies, putting in place various precise mechanisms in addition to helping the judiciary carry out their tasks of selling public property. They added that the projects implemented by the government did not bring economic benefits,

on the contrary, it increased Sri Lanka’s debt to China, and the government recently awarded the contract for the construction of the 17 km Kilania-Athurugiriya highway to the China Ports Engineering Corporation without a competitive bidding process as the Chinese company became the first foreign company to own a major highway in Sri Lanka. Over the next two years, the government plans to sell hundreds of acres of state-owned land in Colombo Fort and its adjacent Slave Island area, including property currently used by the Sri Lanka Air Force and the Army.

Parliamentarian Manusha Nanayakkara from SJB Party (Samagi Jana Balawegaya) said:
“When there was an economic crisis in the country, China involved itself. So did other countries, we took loans from them as well. The last Rajapaksa regime which was there before the 2015 to 2019 regime, developed a robust bilateral relationship. We received cooperation during the war to buy weapons and construct various other projects, such as conference halls, Lotus Tower, and highways. The country started Implementing projects which were not yielding any economic benefits; instead were utilizing the finances on mere land fillings, which had no economic benefits. We cannot blame China directly on this, since we voluntarily were eager to obtain massive amounts of loans from China.”
“On the background of this whole scenario, the commissions which were part and parcel of the loan played a prominent role. Eventually, the contracts on these projects were also given to the same country, from which we were taking the loans. It created a scenario where China, the construction company, and the Politicians were benefiting. Due to this scenario, Sri Lankan people are in debt of Billions of dollars to China. Not only Sri Lanka, but many other countries in the world are also facing this dilemma with China and have become a victim of the so-called neo-colonization. Certain elements implement neo-colonization on various other political plots to form to stretch their muscles. Yet, sadly, our country has been a victim of this. Although we are a suffering country, we have lost our control over China where they have cornered us with their so-called ‘Chinese Debt Trap’.”

Mr. Nuwan Bopage, and Attorney-at-Law cum a Social Activist said;
“If someone is in a belief that due to this process the country is developing, the only question we have to ask is that since Chinese investments have arrived E.g. Shangri-La Hotel, and what is that impact that Hotel Shangri-La has on the country’s economy?. What is the development that country has achieved with Hotel Shangri-La? Not only is the land the total profit also being benefitted by China. Sri Lanka is yielding only a mere tax. Certain Ministers were claiming that nearly 80 Thousand employment opportunities have been open up, but when we enter Hotel Shangri-La, it is obvious that even the receptionist is a Chinese national. This zone has become nearly a Money laundering hub even depriving the Sri Lankans of the said job opportunities. We cannot consider that through this there will be any development to the country or its people. Finally, even in the judgment given by the Supreme Courts of Sri Lanka to pass this bill by a simple-majority in the parliament with certain amendments, yet it does not make any major impact on safeguarding the sovereignty and the territorial integrity.”

“A platform has been created to sell public properties in few areas in prime locations. The whole scheme has been created to sell public properties. Although, the current government came into office claiming to regain Public Properties which were already sold to different countries based on different terms and conditions. Especially, they strongly opposed and raised voices against the previous Good Governance Government when they attempted to sell the Controversial Hambanthota Port. The same officials and politicians are currently are at selling public properties. They have schemed various scrupulous mechanisms and the judiciary’s help to carry out their missions of selling public property without the slightest instigations to the masses. Without finest considerations of the Social classes such as the commoners, the farmers, and the students, they have laid the ground for Multinational Companies to invest their money here and take back the providences to their mother country, and the so-called politicians making money to themselves only to be invested abroad, it is simply a concept of money laundering hub. “