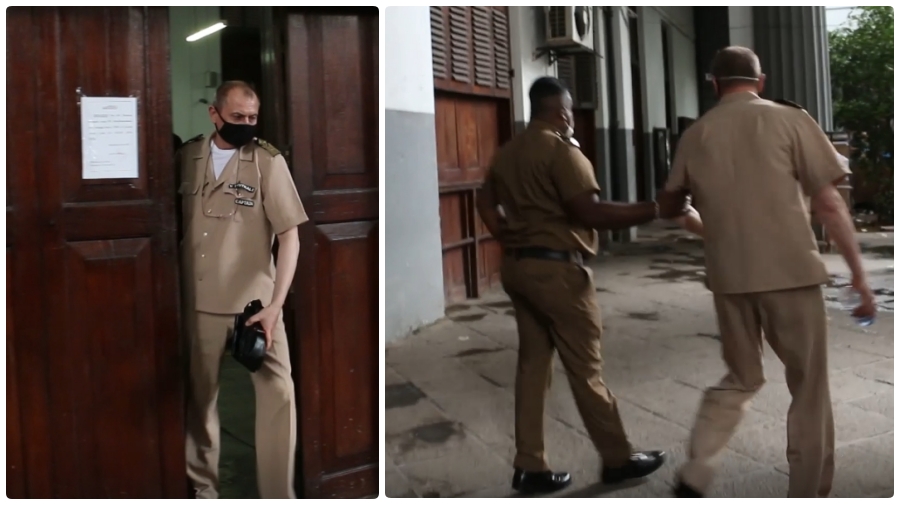 The Captain of the Express Pearl ship who caught fire in Sri Lankan waters
should immediately investigate the radio data at the Colombo harbour where he
allegedly had radio conversations and report to the court. Colombo Additional
Magistrate Lochani Abeywickrema issued the order to the CID yesterday (15).  The
ship’s DVR. The Magistrate issued the order after considering a request made by
President’s Counsel Sarath Jayamanne, who appeared for the ship’s Captain, to
order the CID to investigate the radio data of the Ports Authority as the
machine.

The Magistrate also issued another order to the CID to initiate
investigations into allegations of contempt of court and report to the courts.
These facts were presented when the magisterial inquiry into the incident was
called back to court yesterday (05). Deputy Solicitor General Madhava
Tennakoon, Senior State Counsel Lakmini Giriyagama, Director of the CID Rohan
Premaratne, Assistant Superintendent of Police Roshan Abeysinghe and OIC of the
Ocean Division Karunatilaka appeared for the Attorney General. Deputy Solicitor
General Madhava Tennakoon, appearing for the CID, said that the ship’s local
representative, C.W. A copy of Consortium Lanka’s email database, was not
provided to the CID. The Deputy Solicitor General also informed the court that
the court had issued an order to provide the copy on the last day of the trial
and that the relevant company had failed to provide them. C. Attorney-at-Law
Sarath Jayamanne told the President who appeared in court on behalf of
Consortium Lanka.

The CID officials have requested that the company’s entire
database be handed over to them. The President’s Counsel informed the court
that although the court had ordered that only the email data relevant to these
investigations be provided, the entire database could not be provided. There
was a risk of the company’s business secrets being leaked. President’s Counsel
Anura Meddegoda, appearing for the company’s Managing Director Arjuna
Hettiarachchi, said that the email database requested by the CID was about
6,000 gigabytes and was being copied. Despite a court order to hand over a copy
of the contents of the mobile phones, laptops, cameras and other electronic
items belonging to the 27 crew members aboard the ship to the CID, it has not
been done so far, said Solicitor General Madhava Tennakoon.

The court was
informed. Nipuna Wimalasekera, a lawyer, representing the ship’s crew at the
time, said that all 13 members of the ship’s crew were Chinese and that they
had not been able to deliver the goods as they had requested a court order
printed in Sinhala. President’s Counsel Sarath Jayamanne, appearing for the
ship’s local agent, told the court that the Captain had informed the Harbor
Master from time to time of the dangerous condition of the ship which had
caught fire, and that the radio messages issued by the Captain were recorded in
the Harbor Master’s Communication Center. The Deputy Solicitor General of the
Government requested that an order be issued to bar Arjuna Hettiarachchi, the
Chairman of the local company on board the ship, from travelling abroad as he
was deliberately failing to make statements. The lawyer who appeared for him in
court stated that Arjuna Hettiarachchi would appear at the CID today (16) at
9.30 am. Considering the facts presented, the court directed the CID to investigate
the Snow data and adjourned the case till the 30th of next month.