High Commissioner Tareq in his remarks paid deep homage to the Father of the Nation, the martyrs, valiant freedom fighters, heroic women as well as the foreign friends and friendly foreign nations who supported Bangladesh’s War of Liberation.

Yesterday, Bangladesh High Commission in Colombo celebrated the 50th anniversary of glorious Victory Day with due solemnity and fervor. The day-long celebration commenced in the morning with the ceremonial hoisting of the national flag at the Chancery by High Commissioner Tareq Md Ariful Islam. Then one-minute silence was observed as a mark of respect to the martyrs of the War of Liberation. It was followed by placing of floral wreath at the portrait of Father of the Nation Bangabandhu Sheikh Mujibur Rahman; reading out of messages of the President, Prime Minister, Foreign Minister and State Minister for Foreign Affairs; recitation from the Holy Quran; and offering of special prayers seeking eternal peace for the martyrs, Father of the Nation and his martyred family members as well as continued peace, progress and prosperity of the country. A documentary on “স্বাধীনতা কি করে আমাদের হলো” – “How Independence Became Ours” was also screened.

Taking part in the open discussion on the significance of the Day, the speakers paid rich tribute to Bangabandhu and all who contributed to the independence of Bangladesh and renewed their commitment to work for the country with dedication. They also reflected on the history of the War of Liberation and Bangladesh’s remarkable socio-economic developments.

High Commissioner Tareq in his remarks paid deep homage to the Father of the Nation, the martyrs, valiant freedom fighters, heroic women as well as the foreign friends and friendly foreign nations who supported Bangladesh’s War of Liberation. He highlighted the special significance of this’s years Victory Day in view of the Birth Centenary of Father of the Nation and Golden Jubilee of Independence. He shared the year-long activities of the High Commission to mark these auspicious occasions and also highlighted Bangladesh’s development journey. He called upon Mission officials to devote themselves to building a “Sonar Bangla” under the leadership of Prime Minister Sheikh Hasina and imbue the young generation with the ideals of Bangabandhu.

In the evening, the Mission held a cultural programme which featured patriotic songs, traditional dance, and recitation of poems. The invitees were treated to a dinner with traditional Bangladesh cuisine. The Chancery was illuminated in red and green on this occasion.  Mission officials also participated simultaneously through video link in the oath taking programme by the Prime Minister held in Dhaka.

Due to local Covid-19 related health restrictions, the observance was held in-house with the participation of officials of the High Commission and their family members. Others in attendance were the Country Director of WFP, Country Director of IFAD and DG of SACEP,. To ensure community involvement, the programme was live streamed on Mission’s Facebook page. 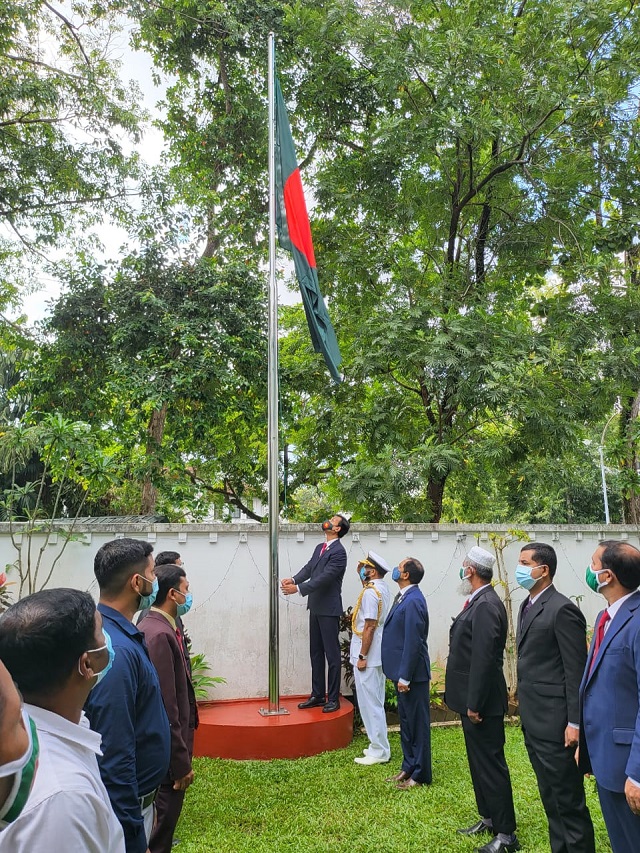 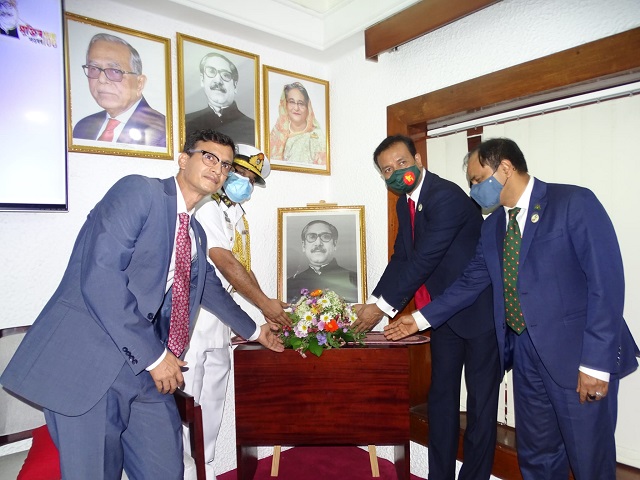 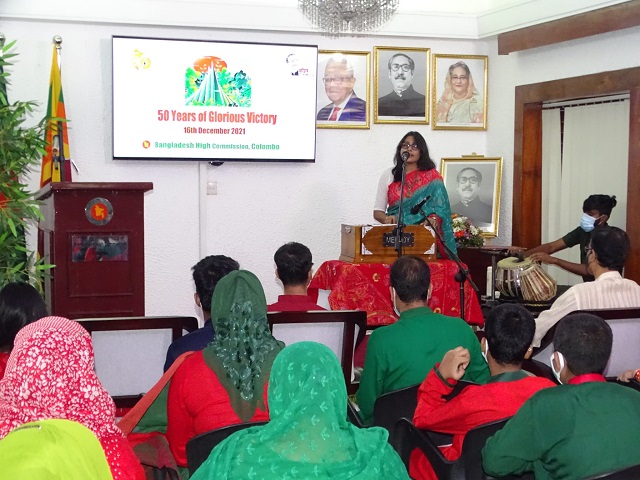