India assisted the freedom fighters of Bangladesh, and their principal military arm, the Mukti Bahini, depicted by Pakistan as India-sponsored rebels and terrorists, with weapons and training.

The birth of Bangladesh was not an Indian invention to dismember Pakistan, which attacked northern and western Indian airfields on the evening of December 3, 1971. Solidarity between the peoples of India and Bangladesh had already grown over the preceding months when India hosted millions of refugees fleeing persecution in erstwhile East Pakistan. 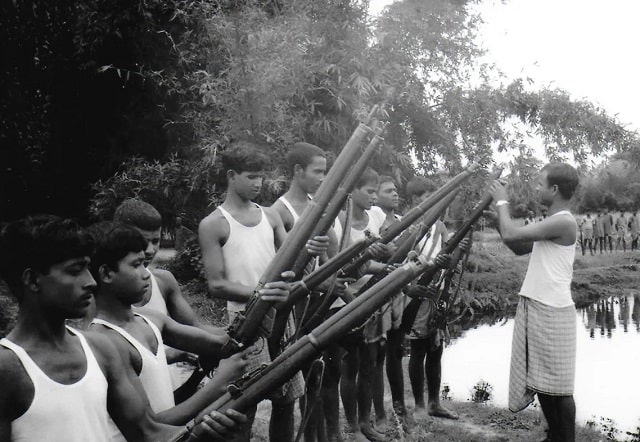 Prime Minister Indira Gandhi spoke on All India Radio within hours of the attack about the brave people of Bangladesh who were fighting for their land and the principles for which India too had fought before. Indira Gandhi added, “Today the war in Bangladesh has become a war on India.” The people of Bangladesh waged the Liberation War since the Pakistan Army’s genocidal crackdown in March 1971. With the start of full-scale hostilities in December, the Indian Army and the Mukti Bahini made short work of the Pakistan Army in less than 13 days.

Pakistan’s first general elections based on universal adult franchise in December 1970, resulted in the Awami League’s resounding victory. It won 160 of the contested seats for the 300-member National Assembly, with Pakistan’s People’s Party (PPP) winning just about half the number: 81 seats.

Zulfiqar Ali Bhutto Bhutto’s apocryphal statement, “Udhar tum, idhar hum”, epitomised his reaction to the election result. For him, there was no question of sitting in the opposition. He was piqued that President Yahya Khan described Sheikh Mujibur Rahman as “the future Prime Minister of Pakistan.” When Pakistan’s National Assembly was called to meet in Dhaka on March 3, Bhutto promptly announced that the PPP would stay away from its session. If any PPP parliamentarian did attend, Bhutto added, he would see that their legs would be broken.

Yahya Khan’s decision, prompted by Bhutto, to postpone the National Assembly session indefinitely created conditions for a showdown. A non-cooperation movement took hold. The administration, the judiciary, and the police, all refused to obey the orders of the Pakistan establishment and began effectively reporting to Mujib. The public expected that he would declare Bangladesh’s independence in his speech at the Ramna Race Course in Dhaka on March 7.

Mujib announced, “Ebarer sangram amader muktir sangram. Ebarer sangram swadhinatar sangram!” He did declare the start of a liberation struggle. Independence, thereafter, was only a matter of time.

Most of the Pakistan’s military establishment and the West Pakistan political elite preferred a shrivelled Pakistan to a country dominated by the Bengalis. Yahya Khan took the blame for the unfolding events. The then Premier of the People’s Republic of China Zhou Enlai later described him as a general “who did not know how to fight a war.” Yahya Khan himself predictably blamed Mujib and Bhutto.

In a 1978 affidavit to the Lahore High Court published by the Bangladesh Defence Journal in 2009, he said that Bhutto was far more responsible than Mujib for what happened because Bhutto refused to accept that “Mujib had a right to govern.” The division of Pakistan assured Bhutto of power. The military establishment took advantage of this to delay the transfer of power to the elected representatives of the people.

On March 25, Pakistan massacred hundreds of people in Dhaka and other major Bangladeshi towns. The interim Prime Minister of Bangladesh’s provisional government, Tajuddin Ahmed, declared on April 17, 1971, after the oath-taking of the wartime government: “Pakistan is now dead and buried under a mountain of corpses.” He pointed out that by carrying out a pre-planned genocide, Yahya “was himself digging Pakistan’s grave.”

The failure of global statecraft and diplomacy

The diplomatic jousting of the international actors, including the United Nations, was infructuous and invariably a step behind the prevailing situation. The United States’ role was calamitous. President Richard Nixon and his Assistant for National Security Affairs, Henry A. Kissinger, by mollycoddling Pakistan, did a disservice to it, as did China’s leaders. By cautioning Yahya Khan that he was treading a slippery path, they could have brought about a political settlement.

Bangladesh’s agony was cut short by India’s forceful intervention. Yahya Khan convinced himself that the United States and China would come to the assistance of Pakistan. When a US Seventh Fleet task force led by USS Enterprise crossed the Malacca Straits into the southern Bay of Bengal, the Pakistan Army’s Chief of Staff cabled Niazi on December 11, 1971, that the Fleet “will be very soon in position” and that China had activated the Sino-Indian border.

The task force did not proceed northward, nor was there any movement by China. By then, the Liberation War was practically over.

Role of the Mukti Bahini

India assisted the freedom fighters of Bangladesh, and their principal military arm, the Mukti Bahini, depicted by Pakistan as India-sponsored rebels and terrorists, with weapons and training. The Indian Army and the Mukti Bahini constituted a Joint Command in the Eastern Sector. It is to this Command that Lt. Gen. Amir Abdullah Khan “Tiger” Niazi, publicly surrendered on the afternoon of December 16, 1971.

Earlier, in mid-August, when Senator Edward M. Kennedy asked Indira Gandhi whether she was under pressure to support the Mukti Bahini, she confirmed she was. When asked if Mukti Bahini operations would grow, she said they would expand regardless of India’s help. Its young members, she added, were highly motivated and would not give in.

Niazi himself wrote later that all the East Pakistan Police, East Pakistan Rifles, Ansars and East Bengal Regiment battalions, and the Bengali members of the Army, Navy, and Air Force rose in revolt after the military action ordered on March 25. They constituted the core of the Mukti Bahini, including its leadership. Days after its formation, Colonel M.A.G. Osmani (Retd.) was appointed its Commander-in-Chief. India’s leadership wanted the thrust of the effort in the Liberation War to be in the hands of the Bangladeshi freedom fighters, who prepared the ground for delivery of the Indian Army’s final coup de grâce.

The Pakistan Army was weakened by Mukti Bahini’s eight-months-long attrition. Its help enabled the Indian Army to mobilise transportation, logistics, and intelligence, precisely locate the Pakistani positions, encircle and confine them, and deny them reinforcement or replenishment of supplies. Bengali marine commandos disrupted shipping, use of waterways, sank 100,000 tons of cargo, and paralysed the Chittagong, Chalna, and Mongla ports. Mukti Bahini’s “Kilo Force” made early, daring air raids on storage depots and communications centres.

Niazi hastened to show the white flag for fear that the Pakistan Army’s last battles might be with the muktijoddhas and the Mukti Bahini. The Chief Justice of Pakistan, Hamoodur Rahman, provides enough evidence in the Commission of Inquiry report that the threat of confronting the Mukti Bahini precipitated its capitulation.

Reflections on the Liberation of Bangladesh

Bangladesh’s independence resulted in impressive economic progress, accompanied by significant achievements in human development, in reducing malnutrition and maternal and child mortality, rapidly increasing the rate of reduction of poverty, and enabling the empowerment of women.

Bangladesh’s Liberation War shows that coercive, anti-people measures can destroy nations. Political issues can never be resolved militarily. Alienation leads to discontent, anger, hatred, and finally, rebellion. Greater fraternity must prevail in the South Asian subcontinent. Its fracturing in 1947 and 1971 ruptured the psyche of its peoples. Overcoming the historical memories is never easy and may take generations, given the divergent narratives of the different sides.