We attained Bangladesh in 1971 to break this vicious cycle of bureaucracy of the British and Pakistani rules and Bangladesh’s Founding Father Bangabandhu Sheikh Mujibur Rahman sincerely wanted to establish a people’s welfare-oriented government administration under the political leadership. 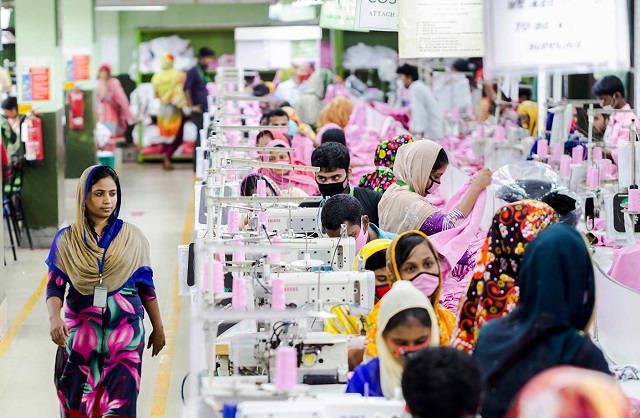 The textile and clothing industries provide the single source of growth in Bangladesh’s rapidly developing economy. Exports of textiles and garments are the principal source of foreign exchange earnings.

The current annual turn-over of garments export from Bangladesh across the world is US$45 Billion.

Let me now touch with SBA’s last paragraph of his column, “Statecraft will suffer as long as the State indulges the petty, pseudo capitalists who are today an albatross around the country’s neck.”  His affirmation is not a magnification, at all, under any setting.

The entire gamut of the situation of apparel sector is truly unveiled in this important column. SBA’s venting of choler would get everybody’s strong-filled backup.

I work at the corporate office. We have a mandatory timetable to enter office before 9.00AM, but I can’t say when we shall be able to leave office (officially, office leaving time is 6.00PM), but the scope of work or bigger responsibility doesn’t permit me or us to leave at the right time.  It is more than slavery. Every moment, I or we are accountable to the company owners. If anybody from outside ask me at 10PM or 11PM, I just say, “I am still slaving in office.” Shall I say more? It will take hundreds of pages to pen-down…

BGMEA and BKMEA can’t goldbrick of their responsibilities that they have now created for the poor workers and their families on the ground of coronavirus malady that has engulfed the entire country.

“It is all a reminder for us of modern-day slavery in Bangladesh, of the cycle of exploitation going on and on and on. It is a cycle that has made it possible for a class of the opportunistically educated to steal the nation’s money and stow it away abroad. It has created manifold opportunities for the exploiting classes to come by fabulous wealth and earn for themselves the dubious reputation of entrepreneurship when they are little better than robber barons. It has given rise to a system where putatively educated people ruin the banking system and yet get away with their criminality. It has created a class of parvenus, of nouveau riche, who have their children educated abroad, who own villas abroad, in whose vision life is all a questionable dream of class advancement. The masses be damned!”

He has also enlightened in accordance with truth, fact or reality,“In our People’s Republic, the people have mattered progressively less since the day petty, parasitic pseudo capitalism burrowed its way into our lives, pushing our collective dream of a socialist order, of a just society based on the sovereignty of the people out the window.”

If it is stated explicitly or in brief details –

It is also very important that Bangladesh is not a resourceful country like China, India…The country can meet only 5% of raw material requirements from its own sources for manufacturing finished garments. For the rest 95% of raw materials, we need to import.

More than that, in international business, both the parties need to sign an agreement where there is a universal clause “Force Majeure” (means the situation which is beyond human control, natural calamities…), but the irony of fact is that this “Force Majeure” clause is only applicable to the end of buyers only for their benefits. There is no scope for the garment owners to avail of this opportunity of “Force Majeure” clause. Even, the buyers do not go for any exclusive agreement with any apparel supplier. Business is done purely on case-to-case basis.

Finished apparels export is purely based on the season-wise and style-wise for the foreign buyers or retailers and for each shipment, it is allowed for a very short time period. Even, if they buy a finished apparel from the factory owner at a price of US$10-15, they sell it to their customers at US$300-350 in their countries. But after one or two weeks, their fixed price also falls because of changing styles of fashion, season change…

Now a modern-day slave like me is speaking the truths only in front of you.

In apparel sector business, there are THREE MASTERS AND ONLY ONE SLAVE GROUPwhich are appended down the stairs:

Second Master is our governmental bodies; and

Third Master is the owners of apparel industries.

All workers, officials and employees belong to the Slave Group.

Even, for a small mistake on the shipping documents, say for example, if you write a single letter ‘a’ instead of ‘b’, they may just deduct us$50-us$200 from payment to the apparel industrial undertakings. So, the slaves always remain affrighted.

The garment industry owners operate their business under customs duty free import of raw materials and export of finished garments. Here, the Second Master, i.e. the different governmental bodies are waiting for showing their red eyes to the apparel industry owners. Their laws, regulations, rules, circulars, ordinances… are so complex and complicated that the real meaning is very hard to understand, but one solitary thing is very clear-cut – those are also purely dictated and one-sided. The industry owners shall have to abide by them in full without raising any question. Otherwise, the governmental bodies have every right to close down any factory at any time on any pretexts. The vast majority of people of those offices are extremely bribee from top to bottom. Without paying their demanded kickbacks, no apparel industry owner will be able to run their factories.

I repeat I have been working with private business firms for more than 45 years and I have to go meet the high-ups of various governmental bodies to get resolved probs which we experience with them. They are public servants: first, they should show respect to people; second, they will not make anything complex and complicated; third, they will not make any issue on a long time processing phase; fourth, they will not take any bribe from any people…But they do diametrically the opposite. And their temerity in their offices is irremissible!

We attained Bangladesh in 1971 to break this vicious cycle of bureaucracy of the British and Pakistani rules and Bangladesh’s Founding Father Bangabandhu Sheikh Mujibur Rahman sincerely wanted to establish a people’s welfare-oriented government administration under the political leadership. But where is that one now? I express my strong resentment to this state of affairs and want get rid of all these nuisances!

Now the Third Master comes. They are the industry owners and they always remain under so much pressure by their Masters, i.e. the buyers or retailers and the different governmental bodies that they treat all their employees as SLAVES only.

One more very important point: The buyers or retailers allow a very limited time to import the requisite raw materials from their nominated suppliers or sellers at their fixed-up prices, finish the garments and export of the them under a tightly time-bound schedule. If any industry owner deviates from an inch from the dictated and one-sided terms and conditions imposed by the buyers or retailers, he will be axed like anything by them.

Still then, this apparel sector has made so many industry owners very wealthy, they can go abroad frequently. When they behave with their employees, they pretend to be the Zaminders, look down upon their employees treating them as SLAVES only. In office, their sitting stylus looks so impudent! They use very costly cars, run costly offices, live in luxurious apartments or flats of big houses. To their employees, they always show their red eyes to keep them under their tightly tied handgrips.