The newly built Church of St. James The Major, in a forgotten village called Kilali, near Pallai not far from Kilinochchi, was opened after consecration by His Lordship, Bishop of Jaffna, Rt. Rev. Dr. Justin Gnanapragasam, in the presence of six priests and a small gathering of local parishioners, on 16 July 2021,without much pomp and ceremony. 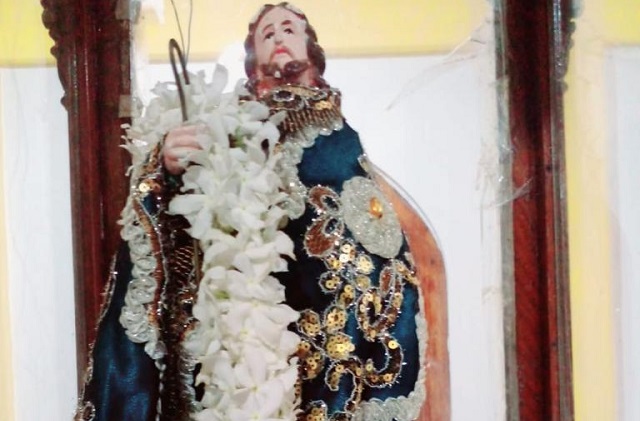 It has taken over a calendar year since it completion of construction in February 2020, for the new Church to be blessed and enthroned.

This delay was ominous due to the mandatory restrictions of the Covid-19 pandemic.

History of St. James’ shrine at Kilali noted over centuries?

The original Shrine to St. James, The Apostle at Kilali dates back to Portuguese times. The Portuguese settlers first came as traders to Ceilan in 1505, but only colonised the coastal areas of Jaffnapatnam, in the north, a century later. Their religious missionaries wanted to spread Christianity throughout the peninsula, Historical records show that the Portuguese colonists and their clergy, commenced building places of worship.

The Portuguese missionaries built a Church at Kilali (Quilale), a crossing point between the Peninsula and the mainland, according to historical records, in 1620. Having installed a statue in honour of their Patron, Saint James. To replicate the pilgrimage shrine located at Santiago de Compostella, in Northern Portugal, where the remains of the disciple of Christ lie enshrined, a similar flourishing pilgrimage became established at Kilali in due time.

Persecution of Catholics by the Dutch

Many have wondered how the shrine known in history books as “Cantiyaku Maiyor of Quilale,” located adjacent to the Jaffna Lagoon, continued as a thriving place of pilgrimage, during the early Dutch invasion of Jaffna, who followed the Portuguese. This situation soon changed with the Calvinist Dutch settlers weary of proselytization, were known to persecute the Catholics and destroyed their churches, as remnants of Portuguese rule.

The shrine of St. James at Kilali was among the churches destroyed at the tail end of the period of Dutch settlement, but the Catholics in the village, retrieved the original statue of St. James and then buried it beneath the original place of the earlier shrine to the Saint. A make shift hut shrouded the buried site where they lit lamps and prayed to escape persecution.

The subjugation of the Vanni by the Dutch

History takes another turn. An ancestor of one of the affluent families of Jaffna in 1740, Poothanar Aararachi, is commanded by the Dutch Commissioner of Jaffna, Pielat, to subjugate the Vanni serfdom, who were rebelling against the Dutch rule. On his mission Aararchi rests his followers at Kilali, unaware the location was once a place of pilgrimage. He is warned in a dream to move to a safe haven to avoid capture. Aararchi vows to restore a shrine according to Hindu custom, if he is successful in his mission to bring the Queen of the Vanni, Maria Sembatte in custody to the Dutch in Jaffna.  The Vanni Queen surrenders to Aararachi on condition he vows over a pot containing a cobra, that he will treat her and her clansmen with dignity and integrity. Aararachi delivers the Vani Queen to the Dutch. He returns to Kilali with all the regalia taken from the Vanni and restores the pilgrimage to the saint on horseback who saved his mission. He builds a new Church at Kilali for the second time and re-creates the pilgrim aspect of this shrine by restoring the buried statue of St. James in the new built church.

The British rule and a flourishing pilgrimage aspect

The history of British occupation since 1796 to 1948, sees another chapter in the annals of the pilgrimage church of St. James at Kilali. The persecution of Christians ended and freedom of worship was restored. A brick building of a new Church was commissioned with a new construction in 1830, with local traditions and customs maintained. It was at this time that a massive new wooden Chariot, called “The Ther” was constructed and adorned to carry the Statute of the Saint drawn by pilgrims.

Kilali once again became a thriving centre of pilgrimage in mid-July annually since independence, accommodating the seafaring communities of the Jaffna Peninsula, from Navanthurai and Passaiyoor among other areas. Besides, Catholics, a large number of Hindu community have participated as a Communal nocturnal Pilgrimage, hearing of the miraculous intercession of the Saint.

The vicissitudes of the pilgrimage

Some may have even heard that since the civil unrest, the war of attrition of the 1980’s and later, the Shrine was desolate, as it was kept as the safe refuge of the Liberation Tigers of Tamil Eelam as their crossing point by lagoon between the Peninsula and Pooneriyn in the Vanni heartland.

It is no strange coincidence that it was during this turbulent period that the wooden hand carved, antiquated Chariot, The “Ther” which was housed in the precincts of the old shrine house, is said to have disappeared without trace and unaccounted, with only the remnants of the four metal wheels remaining in the old Church as memorabilia.

This Chariot’s origin dates back to early British conquest times in 1830’s, and was used annually since on the penultimate day (24 July) of the feast of St. James to transport the miraculous statute of the saint, in the nocturnal religious procession drawn by pilgrims, around the flagpole.  What has been lost to pilgrims, is also of serious interest not only to archaeologists, but to historians.

Why we need to explore the legacy of the history of the Old Church?

Whilst in 2021, we celebrate the 400th year of the history of the old cadjan hut shrine of St, James’ Kilali, later rebuilt three times also in red brick during British colonial times by benefactors, and a new church today, the fact that St. James is still known, is testament both to Kilali as a place of refuge and as pilgrimage.

It was first to house the persecuted Catholics and Christian during Dutch Occupation of Ceylon. History records that in early 1700’s there was severe persecution of anyone who was not Calvinist in the Peninsula. The vicissitudes of the pilgrimage to the Shrine of St James did continue in the 1950’s after Vatican Council II, with the Church waiving the Latin rite and wanting restoration of the local languages for Church service.

Church ceremonies all through its history at the shrine of St,James of Kilali over centuries have adhered to Tamil customs and traditions of the local people and converts to Christianity. It has remained unchanged against all the odds over the centuries and still continues to survive.

These traditions involve flagpole raising or “koddietram” prior to nine days of the festival on 16 July annually. The Novenas include morning service followed by nine days of Church services, with “koodu” or small chariot processions nocturnally around the shrine, followed by the “Ther” or large Chariot on the penultimate night of the festival, which has had to be abandoned due to the situation as explained earlier.

The structure of the ceremonies used to consist of “songs of praise” called “viruthams” in honour of God and the saint, to drum accompaniment and the clang of cymbals. It is further embellished with the carrying of multi-coloured large silk Umbrellas, standard bearer “aala vatams” and oil burning torch burn “pandams” turning the setting into a night pageant, in honour of the saint.

The Church of Antiquity of St. James exists alongside today

The Church of St.James in antiquity, over centuries, grew in stature from being a mud and cadjan roof construction to one built of bricks and mortar during early British rule.

The consecration of the original brick Church of Antiquity in 1836, was delayed. It was due to the Apostolic Vicarate of Jaffna was not created until 17 February 1845 by Pope Gregory XVI (1831-1846) from the Colombo Diocese.

It was up to then head of the Apostolic Vicarate of Jaffna, Bishop Orazio Bettachini of Jaffna to consecrate in 1849 and install the Church of St.James at Kilali.

On this count, the Church in Antiquity of St.James is 185 years old by construction and 172 years after being consecrated.

It took a further 100 odd years in 1949 for the next milestone in the annals of its history.

The Church in Antiquity was then renovated and extended to include six extra pillars, three on each side and an addition to the tiled roof and the extended floor space cemented, with the façade open front to accommodate the “Ther” Chariot, to be positioned and drawn by pilgrims from the front of the Church.

All this extended construction work to accommodate the increasing number of pilgrims, took one year to complete. The then Bishop of Jaffna, Rt. Rev. Dr.J. Emilianuspillai in on 23 July 1950 blessed the extension of the Old Church with much pomp and ceremony before the festival.

Besides, the families of Poothanar Aararchi, the ancestor of the Catholic families, now resident and strewn around the globe, for whom the nostalgic memories of the Novena festivities in times past, continue to enthral and entice a bond of religious veneration to the miraculous Saint, across the miles and oceans.

Anagarika Dharmapala: Admirer of ‘Queen Mab’Dr. Jayaruwan Bandara seeks for 14 days to appear before CID28 persons at a funeral test positive for Covid-19Pahanthudawa clip uploaded by a female – Police