People of different countries such as Russia, India, Pakistan and Africa are enjoying their retired life in the UK with looted money. Even, the Indian government asked British authorities to extradite corrupt Indians who are living in the UK on self-exiled after financial embezzlements in India.

United Kingdom (UK) is amongst the world’s strongest democratic states. It is famous for following the laws of the land. Furthermore, it also claims to uphold its commitment to combat corruption and financial crimes but only when it involved other states. However, the situation on the ground is very tricky and different, which is far away from reality. As per available and verified media reports, billions of looted dollars are pouring into Britain every year. This money is coming from developing states, which are already struggling to find mechanisms to boost their economic system. The corrupt leaders of developing states, who governed their countries, looted this money through illegal means such as corruption or by evading taxes and eventually sent them to the UK, considering it a secure place for illicit investment. With this increasing trend, the international community must own the responsibility and take actions to stop this illegal inflow of money, which is pouring into the UK. The international community must initiate the process to stop this illegal inflow of money to the UK and give it back to respective states. 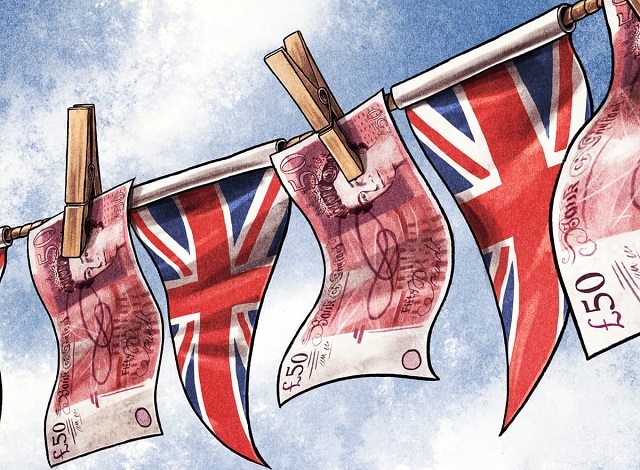 The British soil has become a cauldron of illegal inflow of money and money launderers. London, which is among the biggest financial hubs of the world has become an increasingly attractive place for criminals to protect their illegal wealth and money. As of today, the UK has become the safest place for money launderers to hide their illegal money. British govt has benefited so greatly from this plundered wealth of the corrupt elite. It would be wise to say that the British government loves fugitive billionaires, irrespective of their race, religion and nationality.

People of different countries such as Russia, India, Pakistan and Africa are enjoying their retired life in UK with looted money. Even, the Indian government asked British authorities to extradite corrupt Indians who are living in the UK on self-exiled after financial embezzlements in India. Similarly, Transparency International, in its report in 2018, has identified £4.4 billion worth of UK properties bought with suspicious wealth and more than a fifth of these properties were purchased by Russian individuals and the remaining amount belongs to people from India, Pakistan and African politicians. Meanwhile, a quarter of all Tier 1 investment visas were granted by the British government during the period of 2008 to 2015, this was the time when no checks were carried out on source of wealth.

Likewise, international organizations have taken little steps to stop this illegal inflow of money into the UK. Amnesty International called the British government to urgently initiate constitutional legal proceedings to overseas companies who buy British property to reveal who their real owners are and use new Unexplained Wealth Orders to better investigate British assets of corrupt individuals. If the British government initiate this process, the inflow of illegal money pouring into to the UK will decrease extensively.

High property prices, which allow corrupt to launder large sums within a single purchase, and a vast network of professionals who facilitate a range of transactions, make Britain’s financial system attractive to super-rich crooks. British governmental authorities are equally responsible for providing safe havens to corrupt people coming from other countries. In addition to this, the British government has been using this money to accomplish its strategic objectives abroad such as spending money on the Syrian war. Consequently, the British government welcomed looted money, money launderers and corrupt people. Though the British government says it is helping innocent civilians in Syria, however, independent organizations say non-state actors also benefited from this money.

The role of the Financial Action Task Force (FATF) has increased owning to these British safe heavens to corrupt people. It should take serious note of the alleged safe havens for corrupt people. As Pakistan is tirelessly working to prevent money laundering, FATF must acknowledge its efforts. Pakistan’s steps will stop the inflow of illegal money to the UK. But, the British government is still viewing Pakistan through the prism of financial embezzlements. This British biased attitude needs to be stopped. Britain must no longer be a safe haven for the corrupt as Panama Papers underlined Britain’s unparalleled links to secretive offshore territories.The British government should introduce legislation that would require foreign companies wishing to purchase UK property or bid for public contracts to disclose their beneficial owners. This legislation is dire need of the hour as it will increase the overall wealth of developing nations.

The writer is Islamabad based expert of strategic affairs