Civilization will never see the sun till the civilians reject their gun.

Brobdingnagian protestation against US gun violence is going on in the country. This problem is, heartbreakingly, uniquely American!

Every day, more than 110 Americans are killed with guns and more than 200 are shot and wounded. The effects of gun violence in America extend far beyond these casualties—gun violence shapes the lives of millions of Americans who witness it, know someone who was shot, or live in fear of the next shooting. 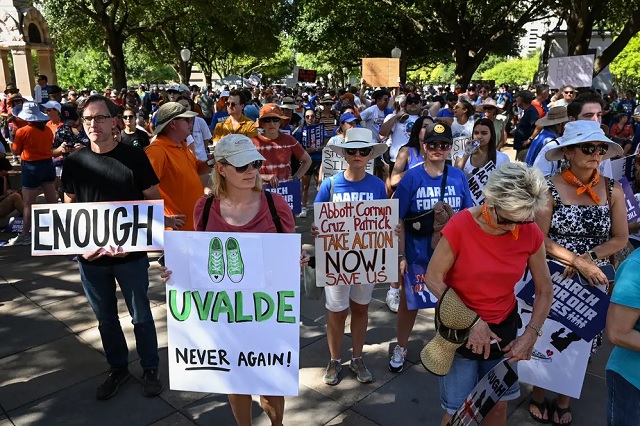 Guns are the leading cause of death for children and teens in the United States.And every week there’s a new mass shooting in this country.

Outside the Capitol in Austin, relatives of Jackie Cazares, 9, and Annabell Guadalupe Rodriguez, 10, two of the 19 students killed at Robb Elementary School in Uvalde, tearfully addressed a crowd.

Standing outside of the Tarrant County Courthouse on Saturday last in 100-degree heat, a pair of mothers compared notes on whether to add a new item to their children’s school supply lists next year: bulletproof backpacks.

Elizabeth Brown, a veterinarian, said she started shopping online for such backpacks for her three children, ages 4, 10 and 12. She saw one that cost US$200 each. Jamie Martin, a high school chemistry teacher, said she saw one for US$150 that she considered for her 8-year-old daughter.

Both mothers doubted whether the backpacks could stand up to a round from an AR-15 — the weapon used by the gunman who killed 19 students and two educators at Robb Elementary School in Uvalde on May 24 last. They said they were exasperated by the thought of having to equip their children to survive an encounter with a gunman in the halls of their school and despaired those 23 years after the Columbine High School massacre, school shootings and active-shooter drills have become routine.

They were among tens of thousands of protesters who marched on the Mall in Washington and in cities across the United States and Texas in a nationwide demonstration convened by March for “Our Lives”, the political movement created after a gunman killed 17 people at Marjory Stoneman Douglas High School in Parkland, Florida, on Feb. 14, 2018. Saturday’s protests were a sequel to demonstrations held on March 24, 2018.

Along with Fort Worth, demonstrations were held in Texas’ largest cities — Austin, Dallas, Houston, San Antonio and El Paso — and in Amarillo, Longview, Lubbock, Pharr, Rockwall, Wichita Falls and The Woodlands.

In Fort Worth, Barbara Gerke, a 58-year-old gun owner, held a cardboard sign that called for raising the age limit for assault-rifle purchases, expanding background checks and instituting a waiting period for the purchase of firearms.

“Nobody’s saying banishes all guns,” she said. “Nobody’s asking for that. We’re asking for common-sense, actual legislation, laws on the books that will do something.”

Brown, the veterinarian, wants to see the state enact “red flag” laws which would allow a court to confiscate firearms from those who appear to be a danger to themselves or others. The idea of arming and training teachers to confront shooters baffled Martin, the high school teacher, who held a sign outside of the courthouse that read “NO MORE.”“I’m just a science nerd,” Martin said. “I’m not a military officer.”

After the Uvalde shooting, Brown and her husband considered keeping their children home from school during the last week of the year, but it didn’t feel fair to leave them out of fun end-of-year activities. Brown noted that shootings have happened at day care centers, churches and grocery stores, so nowhere feels safe.

Days after the Uvalde massacre, Brown attended her daughter’s fourth grade graduation. “I was crying because those kids should have been doing that,” Brown said. “I shouldn’t have to fear sending my kids to school. I shouldn’t have to think that they’re not going to come home after I just dropped them off on the way to work every morning.”

There were counter-protesters in Fort Worth, too: Some gun rights advocates waved Don’t Tread on Me flags and argued with gun safety proponents.

In Austin, protesters marched at the Capitol, trying to sway a Legislature that has repeatedly loosened gun laws over the past decade. A relative of two cousins killed in Uvalde — Jackie Cazares, 9, and Annabell Guadalupe Rodriguez, 10told supporters of gun safety legislation about their grief and anger.

“While I was fearing for my own life, I didn’t know that my sister had lost hers,” said Jackie’s older sister Jazmin, 17, referring to a school-district-wide lockdown that was imposed amid the chaos at Robb Elementary. “I am unbelievably angry, but I’m not going to turn my anger into hate. I’m going to channel that anger, and I’m going to create some real change.”

Jazmin said she and her sister had hoped to spend the weekend after the massacre practicing to audition for a summer arts academy. She said of the gunman, “That 18-year-old guy, you’ll never catch me saying his name. He doesn’t deserve to be remembered. Jackie does. I walked past him in the halls, probably waved at him. And he took her from me. He took her friends, my cousins.”

David Hogg, who helped organize the March for ‘Our Lives’ movement after surviving the Parkland shooting, told the crowd in Washington that some 200,000 people have died of gun violence in the United States since then.

“All Americans have a right to not be shot, a right to safety,” he said. “Nowhere, nowhere in the Constitution is unrestricted access to weapons of war a guaranteed right. We’ve seen the damage that AR-15’s does, when we look at the innocent children of Uvalde. Tiny coffins filled with small mutilated and decapitated bodies. That should fill us with rage and demands for change — not endless debate but demands for change, now.”

He continued, “If our government can’t do anything to stop 19 kids from being killed and slaughtered in their own school, and decapitated, it’s time to change who is in government. As we gather here today, the next shooter is already plotting his attack, while the federal government pretends it can do nothing to stop it. Since the shooting in Texas, the Senate has done only one thing: they have gone on recess.”

Already this year, America has experienced more than 250 mass shootings, according to the Gun Violence Archive, including 34 since Uvalde.

Stay tuned to those working for change. David Hogg continued, “We can decide we’re no longer willing to accept the violence. We can turn our pain into action. What you decide to do today can save a life — maybe your child’s, maybe your own.”

Civilization will never see the sun till the civilians reject their gun. American diplomatist to Bangladesh – Mr. Peter Haas, should work with full of variety or interest for ending Brobdingnagian gun violence in the USA, but do not try to meddle into the internal affairs of Bangladesh (he has been relentlessly trying tointerfere unwantedly into the nationalaffairs of Bangladesh)or any other independent and sovereign states.

The writer is an independent political analyst based in Dhaka, Bangladesh,who writes on politics, political and human-centred figures, current and international affairs