Neoliberalism was born in Chile, as the popular slogan goes, and it will die in Chile. This slogan seems to have come true with the ending of the Pinochet era.

“It feels like we are at the end of an era,” Bárbara Sepúlveda tells me on October 12, 2021. Sepúlveda is a member of Chile’s Constitutional Convention and of the Communist Party of Chile. The era to which Sepúlveda refers is that of General Augusto Pinochet, who led the U.S.-backed coup in 1973 that overthrew the popularly elected government of President Salvador Allende. During the Pinochet era, the military acted with impunity, and the left was assassinated and sent into exile—while big business (both Chilean and foreign) received all the blessings of the dictatorship. That’s the era that has slowly been sputtering to a halt since Pinochet’s removal in 1990 and since the Chilean people voted to throw out the dictatorship’s Constitution of 1980 and write a new one. 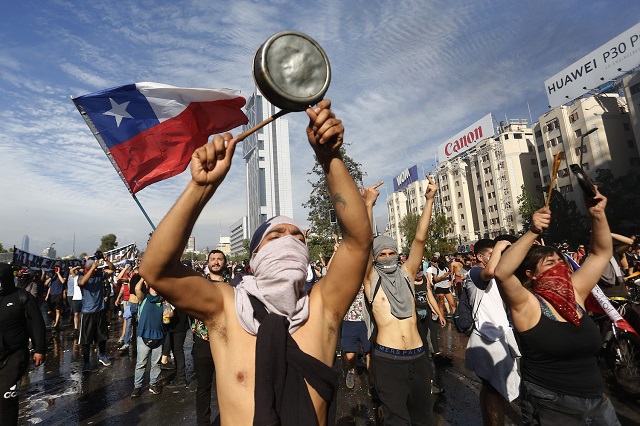 Neoliberalism was born in Chile, as the popular slogan goes, and it will die in Chile. This slogan seems to have come true with the ending of the Pinochet era.

But Sepúlveda is not sure about what comes next. “Everybody knows everything is uncertain,” she says frankly. “That is an opportunity to begin a new era.” The first decade and a half after Pinochet’s removal seemed bleak. Then, in 2006, a cycle of student protests rattled the country. These were led by young students, whose black-and-white school uniforms gave the protests a name—La Revolución Pingüina, or the Penguin Revolution. The young people demanded a new national curriculum as well as a reduction in public transportation fares and examination fees. When the government failed to deliver on these demands, a second cycle of protests mobilized in 2011-2013 with the same demands. Their leaders—including Camila Vallejo of the Communist Party and Giorgio Jackson of the Democratic Revolution—are now important figures of the left project in Chile. Once more in 2011-2013, the students were met with a stalemate, with the Constitution of 1980 being a barricade to their ambitions.

A third cycle of student protests began in early October 2019 following a hike in public transportation fares. The “penguins” led a campaign of fare evasion (under the slogan ¡Evade!). The protesters were met with a harsh repression campaign including violent clashes with the Chilean police. On October 18, the right-wing government, led by President Sebastián Piñera, issued a two-week state of emergency, authorizing the deployment of the Chilean Army against the protests, which only intensified. The violence used to suppress the protests resulted in the emergence of the slogan Piñera Asesino (Piñera the assassin) among protesters and their supporters.

Sepúlveda says of the 2019 mobilization that the breaking point on “October 18 moved the axis [of Chilean politics] further to the left.” Although the third cycle of protests had initially been a response to the transportation fare hike, the government’s reaction made it clear that the country faced much deeper underlying structural issues including, Sepúlveda says, “overwhelming inequality” and corruption. Sepúlveda, a lawyer who co-founded Chile’s association of feminist lawyers (ABOFEM) in 2018 and was its executive director during the 2019 protests, saw at the time that changing these structural issues could not be done from within the existing system; at the very least, the country needed a new constitution and a more progressive government. And so the protest expanded to include the demands of the feminist movement and the Indigenous movement, pushing for broader economic and social changes to address the inequality at the root.

The search for the new era in Chile has two important avenues: the writing of the new constitution, which is what the 155 members of the Constitutional Convention are doing, and the presidential election to be held on November 21, 2021.

The convention began work in July 2021 by voting in its president (Elisa Loncón) and vice president (Jaime Bassa); both Loncón and Bassa lean toward the left. So far, the convention has drafted its rules, which—Sepúlveda says—is more than half the work. Discussion about substantial issues began on the symbolic date of October 18, 2021, two years after the turning point of the third wave of protests. Sepúlveda is confident that agreements on social rights—for gender parity and for the environment—will happen. She says that “social changes of [these kinds] are inevitable”—even if there will be a fight from the calcified right wing to block them. The real dispute will take place around a new development model. Will the new constitution roll back the structural austerity program that the post-Pinochet period so far has not been able to undermine?

On October 14, I spent a few hours with Giorgio Jackson, one of the student leaders from the 2011-2013 protests, who is a member of Chile’s Chamber of Deputies and a close adviser to Gabriel Boric’s presidential campaign. Boric, a leader of the Frente Amplio (Broad Front) party and the Apruebo Dignidad (Approve Dignity) coalition, is the candidate of the left in the November presidential election. Jackson shared some elements of a new development model that a Boric administration would adopt, if Boric wins the presidential election. In the first year of the next presidency, the budget of Piñera would have to be followed, so only small changes can be made. From the start, Jackson told me, a priority for the Boric government would be to push to reform the health and pension systems, two arenas of great distress for Chile’s people. Building robust public health and pensions systems will require funds, which a left government would raise from royalties on copper extraction and by ensuring better prevention of tax evasion. Such an agenda would deepen a debate over a new development model, Jackson said.

But, Jackson admits, people are uneasy with the idea of having public provision of goods. Daniel Jadue, the communist leader and mayor of Recoleta, agrees that the real dispute will be over economic and social policy. He tells me that the answers to Chile’s problems could emerge from close cooperation between municipalities. If people have a positive experience with local public provision of social goods, it might change the general sentiment of suspicion surrounding the expansion of public health and pensions systems in the country, he noted. The work of mayors such as Jadue is crucial to the overall project for the construction of a new development model.

As far as the upcoming presidential election is concerned, Piñera cannot run for reelection, and besides, he is deeply unpopular. The open fascist in the race—José Antonio Kast—is popular, but he is being challenged by the center-right’s candidate Yasna Provoste for the right-wing votes. Meanwhile, capital has begun to flee Chile in anticipation of the introduction of a more progressive constitution and the potential ushering in of a Boric presidency after the November election.

In one corner of Bárbara Sepúlveda’s living room sits her collection of Rubik’s Cubes of varying difficulty. She’s a whiz at them. Sepúlveda picks one up and toys with it. “This one is easier to do,” she says of a cube that seems impossible to untangle. The cube is a great symbol for Chile. If people like Sepúlveda, Jadue, Jackson, and Boric can find a way to solve the puzzles before them, then perhaps there will be greater clarity on Chile’s new era.