On January 9, 2022 local time, State Councilor and Foreign Minister Wang Yi, along with Sri Lankan President Gotabaya Rajapaksa and Prime Minister Mahinda Rajapaksa, attended the launching ceremony of the celebrations marking the 65th anniversary of the establishment of diplomatic ties between China and Sri Lanka and the 70th anniversary of the signing of the Rubber-Rice Pact in Colombo. 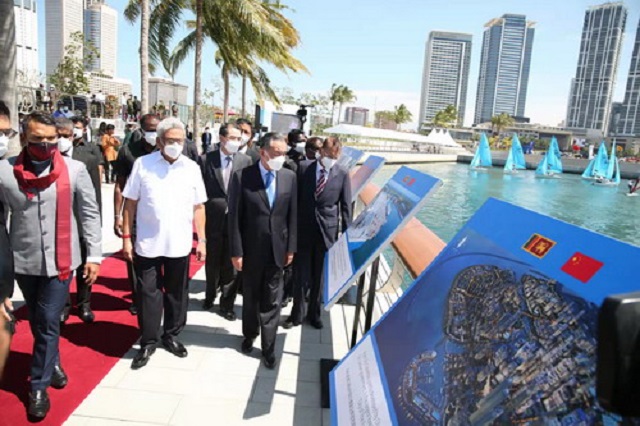 Wang Yi said, the friendship between China and Sri Lanka dates back to ancient times. Faxian and Zheng He left a long-lasting imprint on the exchanges between the two peoples. The Rubber-Rice Pact fully demonstrated our national spirit in the fight against hegemony and power politics. Since the establishment of diplomatic relations in 1957, the two sides have always respected and supported each other. In 2014, President Xi Jinping paid a historic state visit to Sri Lanka, opening a new chapter of friendly cooperation between China and Sri Lanka.

Wang Yi said that China and Sri Lanka are good friends standing together with mutual assistance. After the outbreak of the pandemic, President Gotabaya donated Ceylon black tea to China twice on behalf of the Sri Lankan government and people, and Prime Minister Mahinda personally led his cabinet members to chant prayers for China. China has provided a large number of COVID-19 vaccines and anti-pandemic supplies to Sri Lanka.

China and Sri Lanka are good partners for common development. Sri Lanka is an important part of China’s Belt and Road cooperation in South Asia. The first phase of the Colombo Port City has been successfully completed, and new projects are ready to be launched. Achievements have been made in our cooperative operation of the Colombo Port time and again, bringing important benefits to Sri Lanka. The cargo throughput of the Hambantota Port has reached record highs, and the industrial park has been developing in full swing.

China and Sri Lanka are good brothers supporting each other. The Sri Lankan side always abides by the one-China principle and supports China’s legitimate position in international and regional affairs. China firmly supports Sri Lanka in safeguarding national sovereignty, independence and territorial integrity and in following a development path suited to its national conditions. The strategic cooperative partnership between the two countries featuring sincere mutual assistance and enduring friendship has kept developing in depth.

Wang Yi stressed, at a time when the global pandemic is spreading and the economic recovery is tortuous and difficult, we need to work together more closely than ever. Both sides should take the 65th anniversary of the establishment of diplomatic ties between the two countries and the 70th anniversary of the signing of the Rubber-Rice Pact as an opportunity to carry forward the spirit of the pact, which is characterized by independence, self-reliance, unity and mutual support, jointly address challenges, share opportunities, seek common development, and consolidate and expand the China-Sri Lanka strategic cooperative partnership, so as to better serve the interests of the two countries and two peoples.

We should further deepen political mutual trust, and firmly support each other’s core interests, major concerns and national dignity. We should further join hands to fight against the pandemic. China will continue to provide anti-pandemic supplies according to the needs of Sri Lanka, and cooperate with Sri Lanka on vaccines and specific medicines. We should seek further synergy between our development strategies. China will firmly promote high-quality Belt and Road cooperation and help Sri Lanka realize its “Vision of Prosperity and Glory”. We should further promote multilateralism, adhere to openness, inclusiveness and mutual benefit, oppose isolation, conservatism and zero-sum games, and jointly build a community with a shared future for mankind.

( Ministry of Foreign Affairs, the People’s Republic of China)