The helpless people of Occupied Kashmir have been a victim to the Indian atrocities and cruelties for the last many decades.

by Ali Sukhanver in Islamabad

Looking at the ever increasing number of Indian atrocities in the Illegally Occupied States of Jammu and Kashmir it seems that this tale of brutalities would never come to an end. In a recent incident, on 4th July 2021, a 23-year-old Muslim girl Afreen Fatima participated in an online forum about the persecution of Muslims in India. No sooner had she wrapped up her session than she found her mobile phone flooded with obnoxious messages, informing her that she had been ‘put up for sale’ on a fake online auction. According to media details her photographs had been uploaded on an app called “Sulli deals” and it all was done without her permission and without bringing it to her knowledge. Same complaint was launched by 80 other Muslim women also; those women included students, activists and journalists. Such degrading behavior of the Indian intelligence agencies would certainly give birth to more hatred and more disgust against the Indian authorities illegally which are governing the states of Jammu and Kashmir. 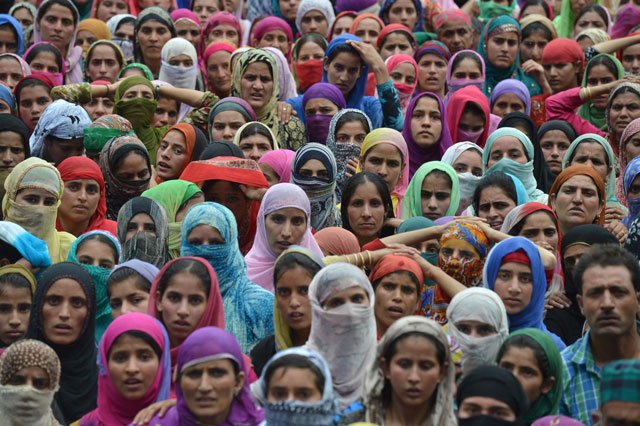 It won’t be an exaggeration if we give the credit of keeping Jammu-Kashmir Independence movement alive even after seventy two years to the illegally deputed Indian troops there. If those troops had not behaved so brutally rather callously, situation would have been all together different. The injustice-drama scripted and directed by the government of India and acted upon by the Indian troops has simply added more fuel to the fire. Be it the 4th July 2021 or the 8th July 2016 or 13th July 1931 or any other day commemorated as the Black Day in Kashmir, it is just a reaction to the atrocities of the Indian soldiers in the valley. 8th July is the death anniversary of young Kashmiri student Burhan Wani who was brutally murdered by the Indian troops defamed as a Liberation Leader rather terrorist. The fact of the matter is that Wani was neither a terrorist nor commander of any militia; he was simply a 22 year old boy popular among the Kashmiri youth as a social media activist with a large number of followers on social media. The Indian government blamed him as the leader of a Kashmiri militant group; Hizbul Mujahidin and on the basis of this baseless blame, he was killed in a fake encounter with the Indian security forces. His death made him immortal and now the people of Kashmir worship and praise him like a hero because he fought for them with his words. His death anniversary is observed every year not only in Jammu Kashmir but also in every part of the world where lives even a single Kashmiri.

Even this year, Kashmiris living in the United Kingdom staged protest demonstrations in London, Birmingham, Glasgow and various cities of the UK and Europe on the death anniversary of Burhan Wani. Main protests were held outside Indian High Commission London and Indian Consulate in Birmingham. The demonstrators raised slogans against the illegal Indian occupation of Kashmir including: “Stop state terrorism in Kashmir, end Indian colonization of Kashmir, We want freedom, Indian army out and release all political prisoners.” In short every year a very remarkable increase could be noticed in the number of those who participate in his death anniversary processions all over the world. From July 2016 to July 2021 the graph of his popularity is continuously soaring high and high.

13th July 1931 had another more pathetic tale to narrate. According to the details, on 21st  June 1931, a public meeting was convened at Khanqa-e-Mualla to choose the representatives of Kashmiri Muslims. At the end of the meeting, a young Muslim, Abdul Qadeer, delivered a speech against the Maharaja and was arrested on 25 June for agitation. On 13 July 1931, Kashmiris gathered in front of Srinagar Central Jail to show solidarity at the time of his trial. As the time for obligatory prayers approached, a young Kashmiri stood up for Azaan (call for prayer); that young man was killed by the Dogra police at the spot. Another youth came forward to continue the Azaan and was also shot dead. In this way, 22 Kashmiris embraced martyrdom during the process of completion of the Azaan. Since then, 13th July is commemorated as Martyrs’ Day every year. The incident ignited a chain of protests for which Muslim notables were arrested and Srinagar was given under military control while civil administration was suspended. Increase in violence by Dogra Forces led to ‘No Tax Campaign’ in districts Mirpur, Poonch, Rajuri and Bhimber from January 1932. To calm down the Muslim protesters and to inquire into their grievances the Galancy Commission was formed which published its fact-finding report in April 1932. The Maharaja accepted the Commission’s recommendations to give adequate representation to Muslims in state services but never implemented them. Same behavior of bias and injustice is still in practice. People say that time always keeps on changing but in the valley of Kashmir, time seems paralyzed as nothing ever changes there with the passage of time; same pains and same troubles, the same agony and the same distress for the people of Kashmir.

The helpless people of Occupied Kashmir have been a victim to the Indian atrocities and cruelties for the last many decades. Countless mothers waiting for their sons; numerous daughters waiting for their fathers but the local police authorities say ‘The missing ones are the militants; they are the terrorists; we too are searching for them; we have their names in the list of the Most Wanted’. But the facts are otherwise; the missing ones and the disappeared ones are neither the terrorists nor the militants; they are the murdered ones. The Indian security forces are the murderers. If some day the international peace-keepers start excavating the valleys of the Indian Occupied Kashmir, they would find thousands of unmarked graves and unidentified dead bodies hidden under the rotten leaves and in the depths of stagnant water pools. All possible is being done by the Indian intelligence agencies and Hindu extremists groups for degrading anyone having any linkage with Islam or Kashmir; and it is really something very pathetic. Surely the civilized world around must listen to the SOS calls of the wretched Kashmiris.