The failure from inadequate administrative means is thus conspicuous and evident. The problem with corruption relentlessly persists. The whole picture cannot be taken in. This article confines itself, therefore, to the corruption within the current COVID-19 crisis.

The fact that corruption has become a way of life in Sri Lanka is accepted by all and sundry. It has been described as a virus as virulent as the coronavirus. But who is worried? Not the all-pervasive Crown. The most disconcerting area of corruption at this moment is in the Health sector. 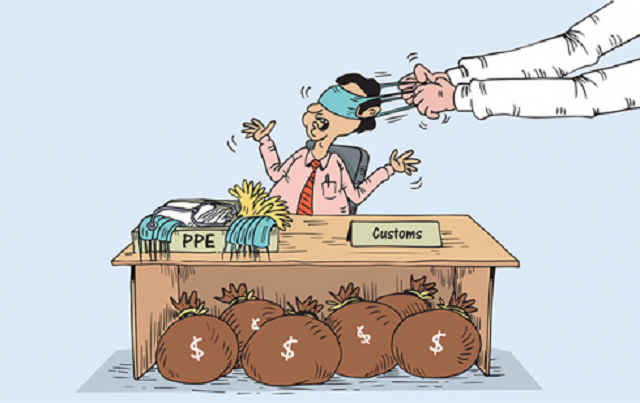 In the wake of the current COVID-19 crisis, corruption has taken on a new dimension of free rein for corruption.  Bribery was a limited concept for over a hundred years when the Penal Code provisions were, for so long, sufficient for its control. In the late 1900s, however, the term corruption was brought in to supplement bribery as a criminal offence.

In the mid-1960s, a Bribery Commissioner (BC) was appointed. With this appointment, instructions went out that all matters of bribery — petitions, information etc. — are to be reported to the BC for action. The Public Service was stripped/relieved of action and responsibility for bribery and corruption. As a result, bribery and corruption became a criminal offence to be dealt with under the law and the courts. Bribery was no longer to be treated as the administrative offence it was till then. By this, the Establishment Code (EC) went completely into disuse. Sole responsibility and action on bribery was with the BC, the law and the courts, to the exclusion of the Public Service and the EC whose concern it is to keep its own house in order.

This relegation of the administrative authority was in breach of UN Convention against Corruption: ‘2003, Article 5 Prevention, Section 3, prescribing ‘Legal and Administrative Measures.’ Sri Lanka was a signatory to the UN Convention. To date, however, there has been no will to reinstitute the EC administrative measures for control of bribery and corruption. The result is that this useful means in the EC to control corruption is blatantly disregarded. One wonders if respective BCs are even aware of the UN Convention.

By reason of the way judicial adjudication is determined in cases of bribery and corruption, the administrative transgression of the public servant gets lost in the court’s determination. And, as a result, the superior officer is unable to make due assessment of the subordinate officer for promotion etc. Every offence of corruption carries with it features that are material to determination of his promotion. Thus, each EC rule, figures around the bribery case: discreditable conduct, disobedience to orders, lack of integrity, neglect of duty, and much more that are relevant to the bribery case. But when the case in courts fails, it precludes administrative sanction against the officers concerned. It has been the general experience that court cases fail on the slightest of technical grounds. Thereby, corrupt officers have come back with clean (laundered) sheets to serve as supervisory officers directing subordinate officers. The Bribery Act, in effect, only provides a safety valve to errant officers.

The failure from inadequate administrative means is thus conspicuous and evident. The problem with corruption relentlessly persists. The whole picture cannot be taken in. This article confines itself, therefore, to the corruption within the current COVID-19 crisis.

Action on the covid crisis started well. Many plaudits were extended to the Army in all aspects of quarantine control. The food, the courtesy, accommodation, toilets etc. were mentioned in glowing terms by Dr Lucien Jayasuriya, a former Medical Administrator. But that was for a very brief time. Under the Task Force, the situation changed dramatically to the opposite. At every turn corruption is the order in the covid crisis. Hotel quarantine, ‘vaccine warfare,’ drugs, ventilators, and tenders, hospital overcrowding, beds reserved for the selected who are willing to pay and for other considerations, COVID-19 Fund collections of questionable repute with no audit, corruptible use of quarantine regulations for political purposes as at Mullaitivu, clearing of forests under cover of covid curfew, the list goes on. All this is while patients are dying like flies in most uncongenial conditions in corridors, nooks and corners.

However, an occasional light is brought to shine through the darkness. The church in some places offered temporary accommodation for quarantine and health purposes. The Association of Medical Specialists (AMS) came out with its 24/7 Programme to help the affected people with medical assistance which the government was unable to offer. In effect, the AMS help cuts across corruption problems in direct service to the people.  Significant too is the Opposition proposal to donate its funds direct to the hospitals than channel it through the government funds.

The Bribery Act has had a chequered run on its programmes. A former Bribery Commissioner, Sarath Jayamanne, PC, a couple of days back spoke on “How to do away with Corruption in Sri Lanka/Role of Law.”  There was much publicity on this at colossal expense. Plainly, the propaganda was in lieu of effective action to control corruption. Forward action was not in their agenda. Not in the manner that Ian Wickramanayake as BC took positive action. He obtained the assistance of senior Police officers with experience in the Police CID, to formulate strategies that kept all public servants on their toes. I know it because I was in the BC Department then.

Will we ever come right again?

(The writer is a Retired Senior Superintendent of Police. He can be contacted at [email protected] )