We were told a reshuffle was in focus for weeks but were not informed when?

Students in Sri Lanka were recommended by their lecturers to refer to Sir Ivor Jennings’ treatise “Cabinet Government” to understand the essence of Collective Responsibility. Today in UK, a seismic Cabinet change is taking place, which can have an impact in Sri Lanka. 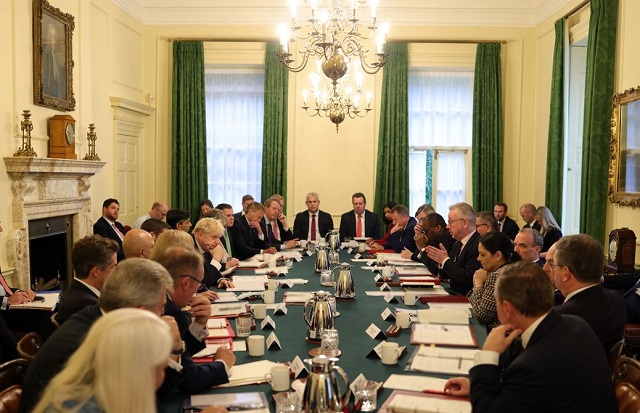 Boris Johnson, became Prime Minister of United Kingdom of Great Britain and Northern Ireland in July 2019. The last time he reconfigured his Cabinet was in February 2020 after the UK formally exited the European Union.

We were told a reshuffle was in focus for weeks but were not informed when?

Though everything in UK happens for a reason and timing is of paramount importance, this day 15 September 2021, perhaps, may well go down among the notable dates for students of British Constitution. Why?

Boris and the “non- Carrie” reshuffle of Cabinet

Boris is a very astute but shrewd British politician. He has wanted to consider a major reshuffle removing his most under fire, politically gaffe prone colleagues, after getting them to deliver what he wanted of them, without individually removing them at will.

He believed in the wait and see policy but more to move strategically waiting patiently until he had achieved his publicly acclaimed successful COVID-19 vaccination programme, to refocus his government on raising living standards, in Britain.

The country expected there would be a change in strategy after his discredited Health Secretary, Matt Hancock fell on his sword and resigned, a matter of regret that had to be duly recompensed?

Within the 18 months of discontent and severe criticism of the stringent Health regulations accompanying Lockdown and intrusion  in peoples’ freedom which was sacrosanct, the Prime Minister, started a “softly, softly process” of being keen in tackling regional inequality within the UK. One way was by bringing in more geographic diversion of his Cabinet, which predominantly comprised members from constituencies in the South and Midlands of England.

There is no denying that Boris was faced with an impossible task, no other wanted to shoulder. He had to cope with the Scots who were clamouring for an Independent Scotland. He had the Northern Ireland and the Good Friday arrangement fiasco after Brexit and was at loggerheads with the EU. He had the French at his coat tails with fishing in troubled waters in the Channel. He had the Russians submarines in the Hebrides, the Chinese wanting trading relations, but not on his terms. Least of all, he had to contend with President Joe Biden and the Afghan pull-out and the steams of migrants in boatloads across the English Channel. All this was a tall order.

What did Boris fail to do?

With all the stresses and strains of office, Prime Minister Boris Johnson did receive a shattering personal blow. He is now in mourning for the loss of his mother, Charlotte Johnson Wahl, 79, who died suddenly and peacefully on Monday 13 September 2021. It is difficult to envisage if he had the notice in due time to be able to be at her bedside, we are never to know?

What are some the attributes, qualities necessary to be in the Cabinet of Ministers?

We are not living in normal times, but in normal times, a Prime Minister has a job of being, “First among equals”. He has to appoint his Cabinet of Ministers with much discretion, thought and planning in mind.

1.   There is always the question of Competence – a Minister has to perform exceedingly well as an Administrator, as a Parliamentarian and as a spokesman, a communicator, – a liaison between the Government and the public and his ministry. to be a Secretary of State is a responsibility, no easy matter. It needs years of extensive knowledge, experience, loyalty to Government, the party, and simultaneously be a respected leader either in the House of Commons or the House of Lords.

2.     There is the Big Issue of National Balance – Governments of UK, in essence need to contain Ministers of all nation states, Scotland, Wales, England and Northern Ireland and be not only knowledgeable of their delegated authority but of the diverse national areas and boundaries, their language, heritage, history as well as the feelings of citizens.

It is no easy matter for a Prime Minister to reshuffle a Cabinet of Ministers. Several key figures in UK Government of Boris Johnson were expected to be out of office. The scale of the reshuffle is in the sole hands of the Prime Minister. This could be either extensive, or limited in scale, or both.

We are informed as at writing the reshuffle has been done, rather ruthless, but refined, perhaps, with Junior Ministerial positions to be assigned,in the days ahead.

I am sure those in Sri Lanka will hardly want to know a roll call of new Ministers of Cabinet rank. The reason for my inclusion of what is in the public domain, is to show how and why Boris is a very seasoned politician, using the best of both worlds, from Asia, Africa and the Middle East to complement his “TEAM BORIS”.

Foreign Secretary, Dominic Raab who had faced calls to resign since he went on holiday in Crete, Greece, as the Taliban advanced on the Afghan capital, Kabul, a month ago, is among the major casualties of the reshuffle, with Boris’ indulgence, he is still in Cabinet. In measured response and to cushion the blow, Boris Johnson has created a new post for him as Deputy Prime Minister. Dominic will combine this role being also Justice Secretary.

Others promoted include Liz Truss, International Trade Secretary becomes, Foreign Secretary. There is no need to say more of her capacity in negotiating the trade treaties after Brexit. A word of caution for our Sri Lanka Foreign Secretary. Liz Truss, is no pushover as she is an ardent, cautious and seasoned legal wizard-negotiator.

Staying put are Ben Wallace as Defence Secretary and the “Three Asians” Rishi Sunak, as Chancellor, Priti Patel as Home Secretary and Sajid Javed as Health Secretary.  Michael Gove a Cabinet Office Minister and a keen player in the negotiations with the European Union, has been moved to be the new Housing and Local Communities Secretary.

The new entrants Nadine Dowden becomes Culture Secretary and Anne Marie Trevelyan returns to Cabinet as International Trade Secretary while Kwasi Kwarteng of Ghanian origin is assisting her as Business Secretary.  Nadim Zadawi, who did a yeoman service as Vaccinations Secretary, who hails from Iraq, is highly respected, “the “reserved mouthpiece” of Boris Johnson. He is rewarded to replace gaff prone Gavin Williamson as the new Education Secretary, a prominent position.

As a Sri Lankan living in the UK over many years, I find it fascinating how the Brits use anyone from anywhere on earth to promote their wellbeing. We in Sri Lanka have to learn this lesson of diplomacy and strategy combined?