All said and done, Joe Biden shedding tears in public makes  one suspect that he has admitted his error of judgement and he is retributing himself and asking pardon from the people.

Most of the people in  the USA and in several other countries seem to think that US President Joe Biden has handled the Afghanistan situation incompetently, without adequate forethought and understanding of the ground realities. 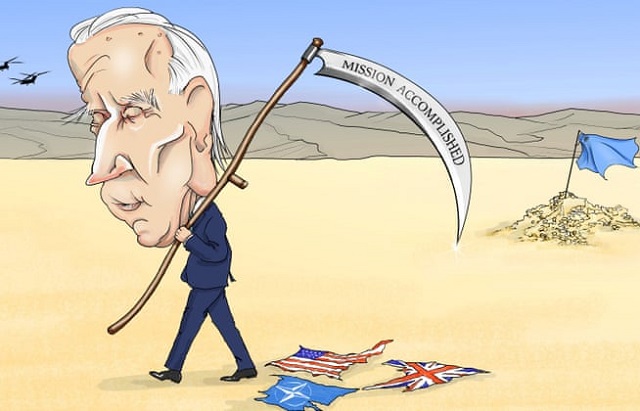 However, Joe Biden’s stand and  argument are weak and unacceptable , as adequate preparation has not been done before withdrawing the US troops  from Afghanistan and  it appears  to be a sudden decision that has made the world remain stunned. Lack of forward planning  is too conspicuous to be ignored.

The  biggest consequence of this decision of Joe Biden to withdraw from Afghanistan after US forces being there for around  twenty years, is that the faith on US as a dependable ally has been eroded to  a very large extent. Further, the claim about the military might of US to fight against the enemy forces  under  any circumstances and at any time  has also been now questioned  and ridiculed.

Finally, when a suicide bomber exploded himself  near the Kabul airport killing many people including number of US troops, President Biden lost his cool and wept in front of the media personnel.

Joe Biden’s  shedding tears  in front of the media , which has been extensively shown in visual media all over the world, inevitably give an impression that Joe Biden realises that he has erred in taking this withdrawal decision from Afghanistan  all of a sudden and further feels helpless and now suffers from  a sense of panic gripping him.

One of the important attributes of any President of any country is that even in adverse difficult circumstances, he needs to maintain a cool attitude . He needs to  exhibit courage of conviction and should give confidence to the people that he can  manage the future developments  competently.   A President who shed tears in the wake of a difficult situation  does not create confidence in the minds of the citizens and perhaps, people would start wondering  whether Joe Biden is the right man for the job.

After shedding tears,  Joe Biden said that he would not forgive  and forget, with a voice of aged and clueless person, with effortful and forced firmness brought to his face.  There is no hint from him how he would approach the future issue  in dealing with  the Taliban terrorists and virtually appears to have surrendered to the Talibans. When the US said that all  Americans would be evacuated from Afghanistan by August,31 and the Taliban leadership arrogantly  fixed August 31 as the deadline for US troops to leave Afghanistan, the prestige of US nose dived and  reached rock bottom level, creating a sense of shock , frustration and humiliation amongst the American citizens.

The question remains that when the  President of a country starts weeping in the light of  the stress that happened due to a crisis , even his ardent admirers would start wondering whether the President deserves sympathy or contempt for his “administrative , governance capability”.

Handling of the Afghan situation by Joe Biden   reflects  very poor strategies with a large number of sophisticated  American arms and ammunition going under the control of Taliban terrorists ,  which could be used against Americans.

Now, US  should not make the historical mistake, that several past US administrations  has done , of supporting one terrorist group in a country to fight against another terrorist group. In such cases, the experience is that ultimately both the terrorist groups  turned against  the US. Will Joe Biden learn the lesson?

All said and done, Joe Biden shedding tears in public makes  one suspect that he has admitted his error of judgement and he is retributing himself and asking pardon from the people.

A leader is  not judged by the tears but by the capability to remain strong in most difficult circumstances , that would create  confidence amongst citizens. The ardent admirers of Joe Biden wish that tears should dry up in his eyes.