Why sea turtles and dolphins drying in our waters last month?

When our country fought against LTTE, our small groups were deployed in enemy beaches for reconnaissance. These highly trained four-man group of SBS personnel infiltrate in to enemy held area discreetly under cover of darkness. They stay there either for reconnaissance or to establish an “Catche” of ammunition and other supplies required for future operations in the area. 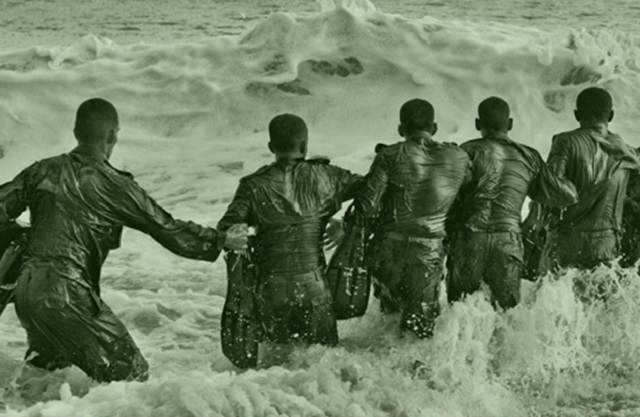 When such risky clandestine operation was conducted those days, when I was CO SBS, committing my best men for these operations, I also go into a cell, staying day and night sleeping in operations room next to our secure communication set, eating the same rations my boys eat out at enemy held area, some days only few chocolates, until they complete their task and get back to safety. Then I used to share cooked hot meal ( mostly Rice, chicken curry, dhal dry curry and pol Sambol) with them.

I am into a different vigil these days. My worry is a bad news.

Not because my boys are deployed, but because my life long friend “Mrs Willy” is in danger. Not like my SBS boys those days, whom I exactly knew where they are deployed. I do not know where she is in this moment, whether in Andaman -Nicobar island chain – 690 nautical miles East of us or in Maldivian archipelago, 425 nautical miles West of us. Further I failed to meet her or track her in her “labour room”,(where she lay eggs every year) under huge Nuga tree in Turtle Bay, Coral Cove this year ! I am worried of your safety my dear friend.

Bad news poured in every day for last one month, that of dead sea turtles and dolphins washed ashore. Some of these carcasses were badly decomposed and some are fresh. Some of their skins were burnt , mouths burnt and few polytene bags found in their stomachs. Dead Dolphins were found with burnt skins. We now know that for sure this catastrophe due to toxic waste of burning container carrier MV X-Press Pearl closer to Colombo harbour. Real scientific evidence yet to be revealed. However more than hundred carcasses of Dead Sea turtles washed ashore during last month in Western and Southern coast.

First, the sea turtles carcasses found on our Western and Southern beaches were smaller in size. Gradually their sizes became bigger. Most alarming was on 30th June, the huge sea turtle (Leatherback) carcasses found in Pinwatta, Panadura beach. Their bodies showed evidence of very painful deaths. An animal survived from Dinosaurs- time has faced painful deaths due to human activities.

Leatherback sea turtles are the champion amongst sea turtles. They grow largest, swim longest and dive deepest. Loosing such grown up sea turtle, as per newspaper explanation, larger than a cow-calf was very sad. She must be at least 100 years old. It was sad to hear such a huge sea turtle, at her prime egg-laying age faced such horrific death. I was very sad.

Do you know the longest recorded journey of leatherback sea turtle by satellite tracking was 12,774 miles ( 20,558 Kilometers) from Indonesia to Oregon (US Pacific North Western region). Satellite-tracking fully-grown Green sea turtle has recorded swimming 4000 Kilometers continuously without a stop for eating. Green sea turtles are the breed of Mrs Willy.

I am worried about my life-long friend, huge green turtle coming every year to Trincomalee Naval Base , Coral Cove, Turtle bay to lay her eggs for last 40 years.

Human interaction with a sea turtle for 40 years is very long time, probably one of the longest in the World. Please go to archives of Island newspaper epaper dated 18th June 2020 and read about this huge green sea turtle, fondly known as Mrs Willy.

I was tracking Willy for last 40 years. She lay 30-35 eggs in Turtle bay, Coral Cove, Trincomalee every year during May- July season, except for few years. That means, she has produced more than 1200 children ! What a great lady who looked after her “endangered spices” existence in this World !

She knows me well. Meeting her almost every year in Turtle Bay, Coral Cove. When I talked to her from a distance, and walk towards her after she lay eggs, she stopped her crawl towards sea and allow me to touch her. When I aim my dim electric torch to her face, l always saw tears in her eyes.

Tears may be due to labour pains she had during laying eggs or seen me and knowing that her eggs are under best protection until hatching is over and her children crawl into sea after 60 days. I miss those tears my friend !

So many Naval children, including my son who knows her and touched her when they were young, asking me whether Mrs Willy is safe ? I said yes!, but my heart and mind saying it’s not.

Meanwhile, Sri Lanka Coast Guard (SLCG) doing their noble duty of protecting this innocent sea creatures continue silently. They protect breeding sites, protect sea turtle eggs and ensure baby sea turtles were released to sea safely. They kept an account of sea turtles they released in to sea. In 2017, SLCG released 5440 baby sea turtles from Wellawatta, Hikkaduwa and Mirissa. In months of February to June, mother sea turtles comes even to metropolitan beaches of Galleface and Wellawatta to lay their eggs under your nose. Those detected by SLCG beach patrols and were protected by SLCG personnel day and night for next 60-65 days until they hatched and babies crawl in to sea.

Why sea turtles and dolphins drying in our waters last month ? As both sea turtles and dolphins surface time to time for breathing, it is possible thin layers of toxic material or liquid floating on the sea surface due to the MV X-Press Pearl accident May have done skin injuries. Other fish May have not effected by this toxic layer as they do other surface for breathing. Anyway we have to wait for an proper inquiry or scientific explanation.

Meanwhile, I am keeping my vigil for my dear friend. I cannot cry for you dear Mrs Willy. I have seen enough of deaths and distractions during conflict time, but I didn’t cry. Please come back to Turtle Bay one of these days dear friend.

(The writer, Retired from Sri Lanka Navy and former Chief of Defence Staff )