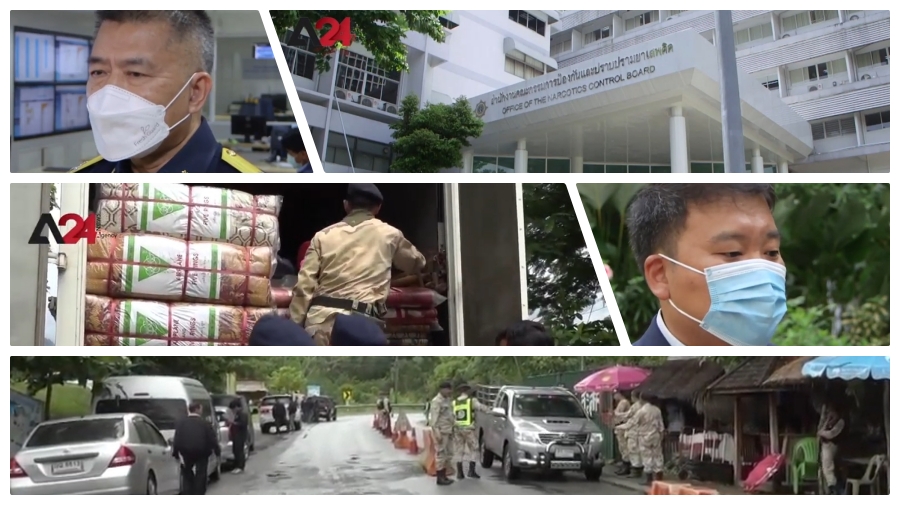 The golden triangle that includes (Shan State, northeastern Myanmar, northern Thailand, and northwestern Laos) is one of the most significant global sources of narcotics, and 2021 has seen a surge in drug production in those areas. Thailand has seized more than 80 million meth pills in the past six months. The Secretary-General of the Anti-Narcotics Committee, Vichai Chamongkol, stated that there is no drug production facility in China. Still, chemicals are smuggled through India and China to be delivered to ethnic minority drug production areas, stressing that drug smuggling operations of all kinds continue across the border despite the efforts made by customs and border patrol police to intercept smuggling operations. One of the officials of the United Nations Office on Drugs and Crime, Inshik Sim, expressed that drug trafficking and smuggling continues around the borders of Myanmar and Thailand on a large scale, revealing that he had received information that nearly 1.5 tons of crystal were recently confiscated in the eastern Shan State in an area called Mong Yang is likely to be heading to Thailand and then to other countries, adding that if the government does not take clear measures, migrant workers will be exposed to danger and may be lured to carry out illegal acts, whether it is human smuggling or illicit smuggling drug across the border.
Vichai Chamongkol  (Secretary-General of the Anti-Drug and Drug Prevention Committee) said:
“The main drug in question is the drug produced in the Golden Triangle area. The Golden Triangle area is located above Thailand and is the borderline of ethnic minority neighbours between Burma, China, and Laos.”
“In China, there is no drug production facility, but the chemicals are smuggled through India and China to deliver them to ethnic minority drug-producing areas.

“In terms of domestic defence, in the case of Thailand, when smuggling is found at the border, We have military operations, customs, and border patrol police to intercept.
“It’s known as the Wa Special Administrative Region Self-Administered Division located in eastern Shan State and consists of the Red Wa Group (UWSA-United Wa State Army) and the Kokang Group. Self-Administered Zone, which uses the area as a drug-producing area.”

Inshik Sim  (United Nations Office on Drugs and Crime) said:
“When you look at drug supply reduction side, you need to look at precursor chemicals for sure. Because when you look at methamphetamine, for instance – seizure trends have been going up over the last decade. However, when you look at the seizure trends of the key precursor chemicals for methamphetamines, it shows the opposite trend. It means that the authorities have not been able to cope with the challenges associated with the precursor chemical.”
“We see that the large-scale trafficking continues around the Myanmar and Thailand border. Recently I was informed that there were nearly about 1.5 tonnes of crystal meth seizure in eastern Shan state in an area called Mong Yang. It was likely destined to Thailand and then for subsequent trafficking to other countries.
Adisorn Kerdmongkol – Senior Officer, Migrant Workers Network)said :
“If the government does not have a clear policy, this will put migrant workers at risk. They might be lured into doing illegal things, whether it is human smuggling or illegal drug smuggling across the border.”
Source – A24 News