The weaponization of the term “fascist” on the part of both the Russian and Western intelligentsia has been a feature of the war of words that the two sides have been engaged in since 2014 when the crisis in Ukraine and the Maidan Revolution exploded.

The question of whether or not Russia is fascist rarely if ever gets asked nowadays because it seems so obvious: Why waste the time it takes to even ask the question? International relations scholars; major media organizations; non-scholarly yet high-profile shapers of the prevailing wisdom; and politicians on both sides of the aisle seem almost unanimous in their response to this question: Why yes, of course it is.

But is the question as settled as it appears? 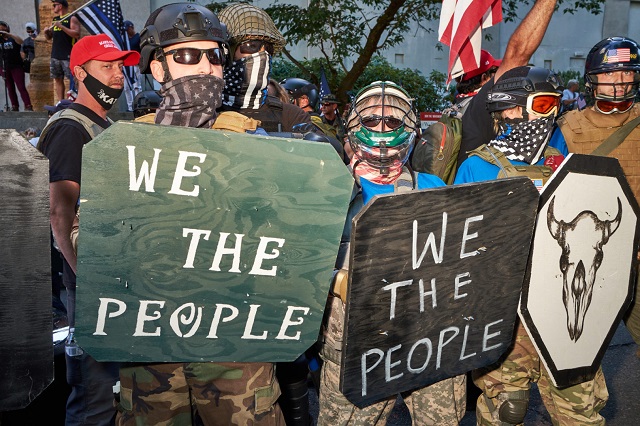 In the book Is Russia Fascist? Unraveling Propaganda East and West, author Marlene Laruelle, a professor at George Washington University and director of its Illiberalism Studies Program, has the temerity not only to ask the question but also to answer it.

Laruelle writes in her book that:

“The study of Russia has long been molded by outdated binaries—democracy/authoritarianism, West/non-West, Europe/Asia, and others. The new line of divide on Western liberalism versus Russia’s fascism (and on the Russian side, on Russia’s antifascism against Western renewed fascism) only contributes another black-and-white pair with very limited heuristic value.

“Propaganda, defined as arousing ‘an active and mythical belief’ without critical distance, can be found on both sides, in Russia as well as in the West.”

The weaponization of the term “fascist” on the part of both the Russian and Western intelligentsia has been a feature of the war of words that the two sides have been engaged in since 2014 when the crisis in Ukraine and the Maidan Revolution exploded.

After the Maidan Revolution, a dividing line was drawn: The West would henceforth refer to it as the “Revolution of Dignity.” While Russians—as well as Ukraine’s disenfranchised Russian-speaking citizens in the east and south of the country—would see it as a “fascist coup.”

Laruelle observes in her book that in the aftermath of the Maidan Revolution, accusations of Russian fascism leveled by high-profile American commentators such as Yale University professor Timothy Snyder and by more obscure figures such as the Ukrainian-American polemicist Alexander Motyl were part of a “larger trend toward using Reductio ad Hitlerum as a new tool for character assassination in international affairs.” She goes on to note that “Positioning oneself as a prophet forewarning about the risk of a new fascism has become a fashionable trend in bookselling strategies,” and cites examples of Madeleine Albright’s Fascism: A Warning and Snyder’s On Tyranny: Twenty Lessons from the Twentieth Century.

But for the most part, Laruelle comes not to condemn, but to elucidate. To her, the F-word (fascist) is simply not a particularly useful term of art when it is indiscriminately deployed to demonize one’s political adversaries.

And while Laruelle’s study mainly focuses on the use and abuse of the term as applied to the West’s relations with Russia, the term “fascist” may have wider applications. Laruelle observes that the “tendency to accuse everyone who challenges liberalism of being a new fascist has dramatically obscured our understanding of today’s Russia as well as the current transformations of the world order and Western domestic scenes.” Indeed, in recent years, anyone who is in the slightest way opposed to the latest trend in performative wokeness may find themselves branded with the scarlet letter ‘F.’

Laruelle’s book comes at a moment when the word “fascist” is thrown around too often without discrimination, and sets a standard of well-reasoned argument for conversations about this moment in both geopolitical and domestic contexts.

This article was produced by Globetrotter in partnership with the American Committee for U.S.-Russia Accord.

James W. Carden is a writing fellow at Globetrotter and a former adviser to the U.S. State Department. Previously, he was a contributing writer on foreign affairs at the Nation, and his work has also appeared in the Quincy Institute’s Responsible Statecraft, the American Conservative, Asia Times, and more.