With a growing realization that Democrats are refusing to use their slim hold on political power to push for a single-payer system of health care, thousands are taking to the streets to demand change.

Activists in more than 50 cities across the United States marched and rallied on July 24 to demand a Medicare for All or single-payer health care system. With Congress and the White House more focused on passing an infrastructure bill, conducting an investigation into the January 6 Capitol riot, and reforming our immigration system, the issue of health care has once more been relegated to the back burner. There is nary a peep from most lawmakers on the fact that, even as the pandemic rages on, nearly 30 million Americans remain uninsured (as per the latest available data), and millions more are underinsured. 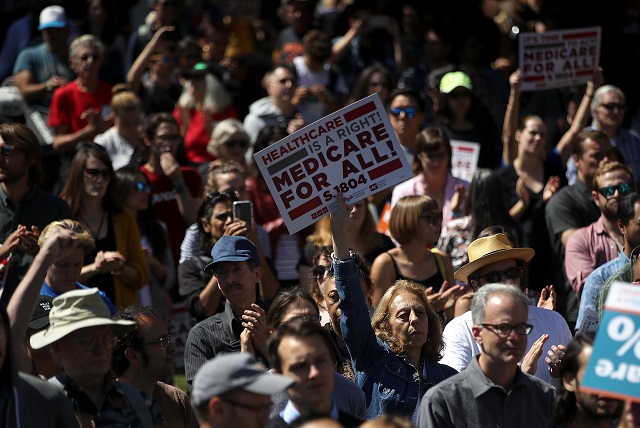 To be fair, President Joe Biden has done what he promised to do during his campaign, which is to preserve and strengthen the Affordable Care Act (ACA) and effectively expand private health insurance coverage via subsidies. The ACA is not designed to cover all people with the best and most affordable health care. Biden’s major legislative achievement thus far, the American Rescue Plan, included more government subsidies for private health insurance plans to cover unemployed Americans while leaving millions more out of the equation. Neither the ACA nor the American Rescue Plan’s health care provisions ensure that all Americans have good-quality free health care.

The only assurance is that private insurance company profits remain healthy. Earlier this summer, the Department of Health and Human Services (HHS) launched a campaign to encourage Americans to sign up for private insurance through HealthCare.gov (perhaps a more appropriate address for the website would be HealthInsurance.gov). The Biden administration celebrated the fact that 2 million more Americans were able to purchase low-cost or no-cost private health insurance plans or sign up under expanded Medicaid programs. The insurance industry front group Partnership for America’s Health Care Future echoed that number as an achievement to celebrate. But neither made mention of the tens of millions who remain uninsured and underinsured. There is even less acknowledgment of the fact that tax dollars are subsidizing corporate profits for what is often mediocre health care coverage.

This is not surprising given that the federal government treats the health care needs of ordinary Americans as an optional luxury item that can be supplied by the market. For example, the Centers for Medicare and Medicaid Services (CMS) refers to those needing health care (i.e., all human beings) as “consumers” whom the government agency advises ought to “maximize the savings on their Marketplace coverage” when shopping for ACA plans. In a press release lauding the American Rescue Plan, CMS uses the word “consumers” nearly a dozen times. Rethinking health care as an essential need like education or emergency services will require a major cultural shift among public servants.

Proponents of Medicare for All are constantly told it would be far too expensive to extend a government program intended for those 65 and older to everyone else. But a fact that has received little attention is that nearly half of all Americans are already getting health care through some form of government programs or subsidy. An analysis published on Quartz found that 161 million Americans are now receiving health care through Medicare, Medicaid, the Veterans Health Administration, or CHIP, the Child Health Insurance Program.

Those who do not qualify for these programs are forced to acquire private health insurance through employment and pay varying amounts out of pocket for hefty premiums, deductibles and copayments, poor prescription drug coverage, lifetime limits on coverage, etc. Such a patchwork system does little more than ensure large profits for private health insurance companies. Worse, it ties millions of people to jobs they may dislike, or forces them to settle for poor coverage that may not even be adequate for the care they need.

For those who are left out of the system entirely, there is no government answer other than to ‘sink or swim.’ A recent Wall Street Journal analysis found that hospitals engage in serious price gouging of the uninsured, charging them far higher prices than they would charge an insurance company for a patient who was covered.

Dr. Paul Song, a board-certified radiation oncologist and president of the California Chapter of Physicians for a National Health Program, was a featured speaker at the Los Angeles rally and march for Medicare for All on July 24. He explained to me after the event that “people are frustrated” about the fact that “we’ve had so many people succumb to COVID in the United States, and it has really illustrated how broken our health care system is.” The march organizers and attendees wanted to send a message that “we’re not going away; we demand better,” he said.

One of the few reports on the Medicare for All marches published by a major corporate-media outlet was this one by David Weigel of the Washington Post who wrote that six months into the Biden administration, “the movement to replace American health care with a cheaper single-payer system has vanished from daily political debate.” He’s right. After Biden emerged as a centrist alternative to Senator Bernie Sanders—one of the most stalwart proponents of single-payer—during last year’s presidential primaries, the next best hope for organizers lay in the appointment of California Attorney General Xavier Becerra to lead the HHS. Becerra’s support of single-payer health care offered the promise of federal waivers for states looking to expand government-run health care. So far, even that has not transpired.

Weigel noted that Sanders’ 2016 campaign for president “inarguably pushed single-payer health care into the Democratic Party mainstream,” and as a result, “most of the senators who would run for president in 2020 endorsed it.” Arguments over whether a single-payer system was better than the current patchwork of private-public health care “dominated months of primary debates,” he wrote. Polls showed this was an issue deeply important to Democratic voters, and yet once Democrats assumed power in the White House, Senate, and House of Representatives, the only focus on health care was to entrench and safeguard the ACA while ignoring the health care crisis affecting millions of uninsured and underinsured.

The contradictions are starker in California, where Democrats have a far more comfortable margin of power than their federal counterparts in D.C. “You hear crickets right now,” said Song, referring to California Democrats who were vocal about supporting single-payer health care under Republican governors whose veto they could count on, but who are reliably silent when they have the votes to pass a bill. California’s Democratic Governor Gavin Newsom sailed into power on a platform of supporting Medicare for All and said during his campaign in 2017, “There’s no reason to wait around on universal health care and single-payer in California… you have my firm and absolute commitment as your next governor that I will lead the effort to get it done.” Today, California Democrats enjoy a supermajority in the state Assembly and Senate and have an ostensible supporter of a single-payer health care bill as governor. But a bill to advance a single-payer system in the Assembly emerged this year only to be shelved a few months later until next year. Newsom appointed a commission to study the issue, but so far, nothing concrete has emerged.

Five years after he first made his campaign promises, Newsom is facing a Republican-led recall effort with a shockingly tepid 50 percent of likely voters supporting him versus 47 percent who are willing to vote him out. One can only wonder how much more support Newsom would be enjoying in the heavily Democratic California had he shown more leadership on his health care promises. Song, who says he supports the governor remaining in office, says, “we should push him to live up to his campaign promises, not only to fight off this recall but to really move California forward.”

The moral of the story is that Democratic Party lawmakers at the state and federal level have often pledged loyalty to issues like Medicare for All when running for office or when governing as a minority party and promptly switched allegiance to the private insurance industry once in office or when their party holds enough of a majority to do something about it. No wonder voters are pissed off and marching in the streets.