Durga calmly understands and counters the evil in order to achieve her solemn goals. Durga, in her various forms, appears as an independent deity in the Epics period of ancient India, that is the centuries around the start of the Common Era.

Bangladesh is a land of holy places, and large religious festivals. The Durga Puja is a celebration of the victory of good over evil, with several variations of the tradition all over the country. Durga Puja specifically celebrates the victory of the goddess Durga over the bull demon Mahishasura. According to legend, Durga was summoned by the gods Brahma, Vishnu, and Shiva, to defeat the demon, which had set out to conquer the world. To help her win the battle, each of the major Hindu gods gave Durga weapons and other objects to assist her. 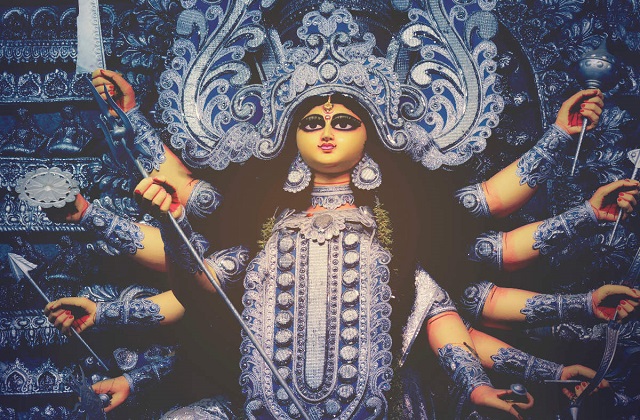 Durga went into battle mounted on a lion and on the tenth day of the battle, she finally killed the demon. Navratri commemorates the nine days and nights of the battle between good and evil, but Durga Puja is celebrated only on the last five days, when according to legend, Durga leaves her heavenly abode to visit earth each year. The festival is a special occasion for Bengali Hindu families to come together from all over the country and celebrate with their relatives and communities.

The five days festival is celebrated with gaiety and grandeur in Bangladesh. Devotees of goddess Durga offer prayers and seek blessings of the goddess. During the Puja, goddess Lakshmi, Saraswati as well as lord Ganesha and Kartikeya are also worshipped by devotees along with goddess Durga.

Durga is an ancient deity of Hinduism, according to archeological and textual evidence available. A key text associated with Durga Puja observations is Devi Mahatmya, which is recited during the festival. Durga was likely well established before the time this Hindu text was composed, which scholars variously estimate to between 400 and 600 CE. The Devi Mahatmya mythology describes the nature of demonic forces symbolised by Mahishasura as shape-shifting, deceptive and adapting in nature, in form and in strategy to create difficulties and achieve their evil ends.

Durga calmly understands and counters the evil in order to achieve her solemn goals. Durga, in her various forms, appears as an independent deity in the Epics period of ancient India, that is the centuries around the start of the Common Era. From the medieval period up through present day, the Durga Puja has celebrated the goddess with performing arts and as a social event, while maintaining the religious worship.

The Durga Puja festival is a ten-day event, of which the last five mark the popular practices. The festival begins with Mahalaya, a day where Shakta Hindus remember the loved ones who have died, as well the advent of Durga. The next most significant day of Durga Puja celebrations is the sixth day, called Shashthi where the local community welcome the goddess and festive celebrations are inaugurated. On the seventh day (Saptami), eighth (Ashtami) and ninth (Navami), the goddess along with Lakshmi, Saraswati, Ganesha and Kartikeya are revered and these days mark the main Puja (worship) with recitation of the scriptures.

It is an annual festival for Hindus of a grand magnitude. The primary goddess revered during Durga Puja is Durga, but her stage and celebrations feature other major deities of Hinduism, such as, goddess Lakshmi (goddess of wealth, prosperity), Saraswati (goddess of knowledge and music), Ganesha (god of good beginnings) and Kartikeya (god of war). The latter two are considered to be children of Durga (Parvati). The Hindu god Shiva, as Durga’s husband, is also revered during this festival.

The festival begins on the first day with Mahalaya, marking Durga’s advent in her battle against evil. Swami Chinmayananda said, “Man, the imperfect, the bound, the sorrowful, has a thousand enemies within. He is riddled with negative thoughts fears, yearnings. These are selfishness, jealousy, meanness, prejudice and hatred just to mention but a few. The Sadhak must get rid of these lawless villains within. With Mother Durga’s kripa, these destructive masters are to be annihilated. Invoke the Mother Terrible to help us annihilate within ourselves all negative forces; all weaknesses, – all littleness.”

The festival is an old tradition of Hinduism, though it is unclear how and in which century the festival began. Surviving manuscripts from the 14th century provide guidelines for Durga puja, while historical records suggest royalty and wealthy families were sponsoring major Durga Puja public festivities since at least the 16th century. The prominence of Durga Puja increased during the British Raj in its provinces of Bengal and Assam. In the contemporary era, the importance of Durga Puja is as much as a social festival as a religious one wherever it is observed

Bangladesh is home to the second-largest group of Hindu Bengalis in the world. Durga Puja is a famous Hindu festival when Goddess Durga is worshipped. It is also known as Durgotsava. Durgoutsob refers to all five days festivity. Dhaka’s most prestigious puja is held at the Dhakeswari National Temple, Dhaka University’s Jagannath Hall, Ramna Kali Temple, Ramakrishna Mission, and Loknath Brahmachari Ashram and also many other parts of the country. The festival is being marked by puja, aroti, recitation from scriptures, distribution of proshad, offering of devotional songs and bhajans. Goddess Durga is the embodiment of female power. She is also the Mother Goddess, deeply revered by her devotees. This festival is the biggest festival of the Bengali Hindus and is celebrated with great fanfare in Bangladesh.

On each day of this festival, devotees offer a flower worship (pushpanjali) and the priest conducts an aroti. At the end of these five days, the idols are immersed in water. As the devotees bid farewell to the Mother Goddess they softly say ‘Aasche bochor aabar hobe’ (We will celebrate your arrival again next year). Like Swami Sivananda, Hindus believe, “Durga (Devi) is synonymous with Shakti or the Divine Power that manifests, sustains and transforms the universe as the one unifying Force of Existence. ‘Shakti is the very possibility of the Absolute’s appearing as many, of God’s causing this universe. God creates this world through Srishti-Shakti (creative power), preserves through Sthiti-Shakti (preservative power), and destroys through Samhara-Shakti (destructive power). Shakti and Shakta are one; the power and the one who possesses the power cannot be separated; God and Shakti are like fire and heat of fire.”

Even when skies turn to gray, we wish that the Goddess will bless Hindus way; to give them strength to overcome it all; and achieve all their desires and goals. Let the divine blessings of the Goddess overflow in their life. Durga Puja is an auspicious Hindu festival celebrated across Bangladesh, India and bordering countries. People celebrate this day with great enthusiasm and zeal. This celebration is also referred to as the Festival of Durga or Worship of Durga as this festival marks the triumph of Goddess Durga against Mahishasura, the demon buffalo. This wonderful spiritual festival, held annually in Bangladesh and elsewhere among the Hindu community in the world. It is celebrated for 10 days.  The tenth day, also known as Dashami marks the Visarjan (immersion in water) of the idol with grand celebrations and processions.  This year, Durga Puja 2020 begins on October 22 and will go on till October 26.

According to a directive issued by puja organisers Bangladesh Puja Udjapan Parishad and Mahanagar Sarbajanin Puja Committee, all Durga Puja idols in the country must be immersed by October 26, 2020, the day of Bijoya Dashami. They have said, “We are respectful to all religions. We are giving the directives to maintain the sanctity of other religions.”

A week prior to the festival, the city gears up and can be seen wearing a look of eagerness and excitement as it prepares itself to welcome the Goddess home. A week before Navratri begins; the idols of Goddess Durga are being painted and made ready except for the eyes. On the occasion of Mahalaya, the Goddess is invited on earth with rituals and so on this day, the eyes are drawn on the idols in an auspicious ritual called Chokku Daan. It is believed the Goddess descends to earth at the time of drawing the eyes on the idols.

On the sixth day of Navaratri i.e. the first day of Durga Puja; the beautifully decorated idols are brought home or into magnificently decorated public pandals. The idol is then decorated with flowers, clothes, jewellery, red vermillion and various sweets are kept in front on the Goddess. The idol of the Goddess is accompanied by the idol of Lord Ganesh. Goddess Durga is considered to be Lord Shiva’s wife Parvati’s avatar and thus mother of Lord Ganesh.

The festival of Durga Puja is coloured with devotional zeal, mythological legends, detailed rituals, extravagant pandals and magnificent tableaus of the divine Mother Goddess and her children. The ten-day festivities of Durga Puja provide one and all with a chance to spread festive cheer and wish their loved one’s peace as well as prosperity. The nine different forms of the Goddess of Power, Durga or Shakti, as per the Hindu religion are worshipped during this time.

The last six days of the festival, namely, Mahalaya, Shashthi, Maha Saptami, Maha Ashtami, Maha Nabami and Bijoya Dashami are celebrated with great pomp and show. The Durga Puja revelry is not limited to elaborate rituals, but extends to various cultural, music and dance performances given by armature as well as professional artists during this time.

On the final day of Vijayadashmi, the devotees bid teary-eyed farewell to the Goddess and her children as it is believed that they leave for their heavenly abode. Their idols are submerged in the water amidst the resonating sound of drums to symbolise their departure.

May this Durga Puja light up for Hindus in Bangladesh and elsewhere throughout the world! We wish that Goddess Durga empowers them with unmatched happiness, great success and good luck. To conclude, we wish to enunciate a few words of a famed poem: “Nil akasher megher bhela, Padma phuler papri mela, Dhaker taale kasher khela, Anande katuk sharadbela. Shubho Durga Puja.” A very Happy Durga Puja to all our brothers and sisters of Hindu community in Bangladesh, Sri Lanka, India and across the world!