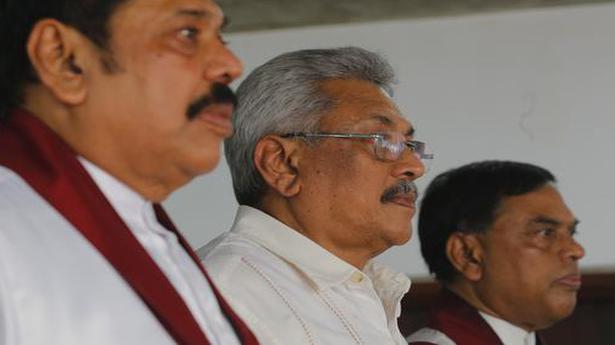 Basil Rajapaksa, brother of President Gotabaya Rajapaksa and Prime Minister Mahinda Rajapaksa, was on Thursday sworn in as Sri Lanka’s Minister of Finance, becoming the fourth Rajapaksa brother and fifth member of the first family to enter the Cabinet.

Mr. Basil Rajapaksa’s appointment, enabled by the resignation of a government MP and Sri Lanka’s national list system – through which political parties get extra seats to Parliament based on their vote share – comes at a crucial time for the Rajapaksa administration that is facing an unprecedented economic challenge, compounded by the COVID-19 pandemic. His entry was also made possible by the government removing a constitutional provision barring dual citizens — Mr. Basil Rajapaksa is also an American citizen — from entering Parliament.

Mr. Basil Rajapaksa took charge of the Finance Ministry, helmed until now by Mr. Mahinda Rajapaksa, who was on Thursday allocated the newly-created portfolio of Economic Policies and Planning.

Mr. Basil Rajapaksa, who served as a Presidential Advisor and Minister for Economic Development in the former Mahinda Rajapaksa administrations, was arrested in 2015 following allegations of corruption and later released on bail. In November 2020, he was acquitted in the case.

Mr. Basil Rajapaksa is credited with building the ruling Sri Lanka Podujana Peramuna (SLPP or People’s Front), the new political vehicle for the Rajapaksas’ return to power in 2019. As chief strategist, it was Mr. Basil Rajapaksa who crafted President Gotabaya Rajapaksa’s campaign in the presidential poll of 2019 and ensured the party’s landslide victory in the August 2020 general elections.

For observers in Sri Lanka, Mr. Basil Rajapaksa’s entry into government is no surprise. “This was expected, it was only a matter of time,” said political scientist Jayadeva Uyangoda, adding: “He was anyway one of the major powers behind the scenes for the last two years.”

The Rajapaksa government has a “triple crisis” to manage, he said, pointing to the “economic, public health and governance crisis”. “If you look at the drama and media hype created around his entry, Mr. Basil Rajapaksa is projected as a saviour, a sort of miracle man. Just like they did when they put forward Mr. Gotabaya Rajapaksa as the presidential candidate,” Prof. Uyangoda recalled.

In his view, although Mr. Basil Rajapaksa has a reputation of being a “economic and political dealmaker”, the current crisis defies those skills. “This crisis is so profound that it is beyond the capacity of a skillful deal maker,” Prof. Uyangoda said.