At present, Sri Lanka’s external debt trap is mainly due to the commercial loans primarily obtained through International Sovereign Bonds (ISB) from international capital markets with high interest rates (around 6-8 percent) and without concessionary periods. The stubborn refusal to go before the IMF is another reason for the present debt crisis.

Minister of Finance Basil Rajapaksa is correct in identifying ‘international drug mafia,’ and ‘fraudulent business operations’ as challenges to the country, whether it should be stated in a budget speech or not. However, just after that and on the same breadth he is castigating ‘social activists’ and ‘civil society’ organizations as forces detrimental to the country, saying the following. 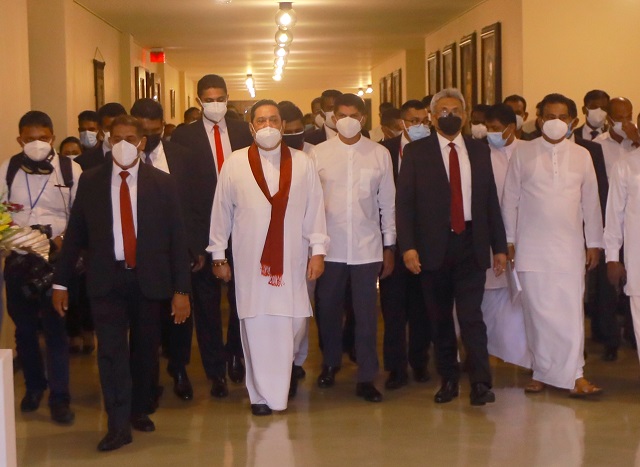 “Similarly, agents of foreign powers disguised as social activists are exerting a considerable pressure on our society to the extent that, today, such so called activism can overthrow strong and populist governments. It is not possible for a government alone to manage. Therefore, I invite all citizens of this country as responsible citizens to be vigilant about this situation.” (p.10).

While he characterizes the social activists and civil society organizations as ‘agents of foreign powers,’ most worrying is the call for government supporters to act as ‘vigilante groups.’ That is the meaning of the last sentence. It is rather funny this is stated by an American citizen! Of course, no one should agitate to overthrow an elected government by force or violence. But call for harmful policies to be terminated, ineffective Ministers to resign, or for an early election to be held is within democratic parameters.

Budget speech has taken the price inflation, affecting the cost of living, as a major challenge. That is commendable. The answer given however is the following.

“We believe that matters, such as, changes in consumption patterns, inadequate increase in production yield, inability to adapt to modern technology, issues with transportation and storage, the impact of intermediaries, and the asymmetry of information, within the production chain have all contributed to rising commodity prices.” (Para 4.5).

“We have to accept that the increase in prices is due to a shortage of goods, the imposition of import restrictions, the overreliance on imports, the depreciation of the rupee together with the failure to adequately encourage manufacturers.” (Para 4.6).

It is simple economics to consider inflation in any country a function of demand (pull factor) and supply (push factor). If the first paragraph gives reasons in the domestic context, the second is primarily relates to external factors. However, it is wrong to begin with or blame ‘changes in consumption patterns’ for the ‘rising commodity prices.’

The author (whoever) should have made a distinction between the (luxury) demands of the rich, and the essential needs of the poor or the ordinary. The country’s problem at present is particularly the latter. Of course, there is a rising demand even on the part of the poor and middle classes because of population expansion and people’s desire to have healthy and quality foods and goods. Leisure and entertainment also are their needs.

It is not wrong to identify ‘inadequate increase in production, inability to adapt modern technology, issues of transportation and storage, interference (not impact) of intermediaries and asymmetry of information’ as contributory factors for the shortages of supplies. If we particularly refer to the agricultural sector (rice, grains, vegetables, fruits etc.), the Minister should have frankly admitted to ‘organic fertilizer’ blunder more than anything else for the present inflation and food crisis. That is not done. It was a blunder because of its unplanned and haphazard nature.

On the external side, there is nothing wrong in identifying ‘overreliance on imports, depreciation of the rupee, imposition of import restrictions’ as reasons for shortages and increase in prices. However, restrictions on the importation of luxury items not only necessary to soften the balance of payments, but also to ease the rupee deprecation under the present circumstances. These have not been in the horizon of the Budget Speech at all.

When we take the Consumer Price Index (CPI) even as a conservative reflection of people’s cost of living, the present conditions are appalling. From January to November this year, the CPI has increased from 138.7 points to 150.7 points, by 12 points.

In a budget speech when problems are identified, clear solutions also should be proposed or offered. Otherwise, there is no purpose of a speech. Unfortunately, this is not the case.

It is partly understandable that public debt (foreign and domestic) going over 100 percent of the GDP during the civil war even though some of the loans and procurements were excessive and harmful to the country. This is something that had to be resolved thereafter. This was not done and in addition many new loans were procured mainly from China and others in the name of ports, airports, and roads. Benefits of these are long term.

There was no five-year plan or similar although this was requested by coalition partners of the UPFA (United People’s Freedom Alliance). Production, entrepreneurship, and businesses should have been promoted through public-private partnership, and through the private sector, before going into particularly largescale ports and roads. Promotion of production and infrastructure should go hand in hand, not one after the other. The partner parties, particularly the Left, also should be blamed for their lethargy or not taking necessary action to pressure or breakaway. Constructive independence is extremely important to the Left.

Of course, there are some developed or high capitalist countries who allow debt to go over the GDP. The US (128 percent) and Japan (235 percent) are two such countries. This is like big businesses taking loans even exceeding their assets and doing their rollovers. However small businesses cannot do so, or not allowed to do so, because their basic capacities are limited.

Likewise, the poor or just developing countries cannot afford to take major stakes in respect of loans and debt. They can easily get into a debt trap, to mean taking more and more loans to pay back the interests and loans. Sri Lanka at present is within this trap.

How has the finance minister explained the present debt question to the people? The following was his explanation:

“In 2014, when President Mahinda Rajapaksa handed over the country to the previous government, the total debt of the country stood at Rs. 7,487 billion. It was 72.3 percent of the Gross Domestic Product. When the present President came to power at the end of 2019, public debt had increased to Rs. 13,032 billion. That is how the government of good governance had created debt.” (p. 14).

Is this correct or not? This is something that the Opposition should explain to the people frankly. Champika Ranawaka, a perennial political high jumper, has at least tried an explanation (Colombo Telegraph, ‘Development and Loans,’ 2 December 2021). After arguing that Sri Lanka’s debt trap is mainly due to the high interest commercial borrowings with no concessions over repay period, he says the following.

“Accordingly, the 8% borrowings which were rigid and high interest at the start of Mahinda Rajapaksha regime became 47% by the end of 2015. As a result the country went in to a vicious cycle from 2016 to borrow from commercial lenders for a high interest without any concessional period to repay. by the end of 2019 the percentage became 58%. further, a sizable proportion of those borrowings were to repay previous debts.”

When Ranawaka blames the Rajapaksa regime for taking high commercial loans during 2005-2015 period and increasing it from 8 percent of the GDP to 47 percent, he also should take the collective responsibility as mainly the Minister of Power and Energy during the period at the end.

Again, when he says the country went into a vicious cycle of commercial debt from 2016 onwards and it became 58 percent of the GDP in 2019 (excluding other and rupee loans), he again should take the responsibility as the Minister of Megapolis and Western Development. This is not to mention the Bond Scam.

I use the term ‘collective responsibility’ in this article not only in the traditional cabinet sense. On the question of debt trap, forex bankruptcy, high cost of living, balance of trade, balance of payments etc. both main parties of the so-called political divide are ‘collectively responsible’ to the country and the people. No one should or could escape from that responsibility.

At present, Sri Lanka’s external debt trap is mainly due to the commercial loans primarily obtained through International Sovereign Bonds (ISB) from international capital markets with high interest rates (around 6-8 percent) and without concessionary periods. The stubborn refusal to go before the IMF is another reason for the present debt crisis.

It was in 2007, during the Yahapalana regime, that the first ISBs worth $ 500 million was raised and then continued during the same period and by the present Rajapaksa regime to cover foreign expenses and previous loans. These commercial loans which was only 2.5 percent of all foreign loans in 2004, became 56 percent by the end of 2019 (See Umesh Moramudali, ‘Sri Lanka’s Foreign Debt Crisis Could Get Critical in 2021,’ 9 February 2021, The Diplomat).

Even in covering the day-to-day internal government expenses, both regimes had to rely on Treasury Bills and Bonds in auctions and allowing direct participation. Because the Treasury is always running out of funds, without a proper tax system in the country and almost all state enterprises are lost making entities. Since January 2020, over 150 auctions/issuances have been conducted for Treasury Bills and Bonds the final obligations running into billions and billions until 2015 and beyond. As a result, the government at present is bankrupt both externally and internally. This has been the fault of not one regime, but both regimes with ‘collective responsibility’ to this pathetic situation.

(Author a retired Professor of Political Science and Public Policy, University of Colombo, had also served as Assistant Director of Commerce, Ministry of Commerce (1969), and a Director (academic) of the Colombo Stock Exchange (2010-2011).