A veteran war correspondent recalls the ignorance, poor judgement, exceptionalism, and hubris in all of our interventions. 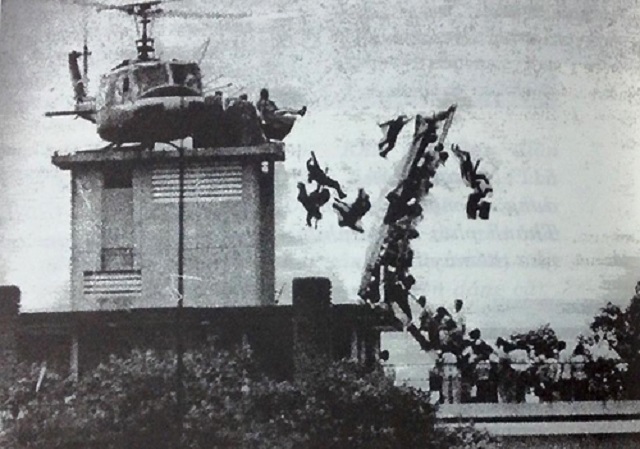 In the end I had to leave the county in a hurry by helicopter from the American Embassy, with the streets of Saigon seething with panicked people we were leaving behind. Thirty years of American effort, first for the French and then for ourselves, was going up in smoke.

In 2014 another American trained and equipped Iraqi army packed up and fled before a less well equipped but better motivated Islamic State when they attacked Mosul.

And in August, once again, a similarly American trained and American equipped army of Afghanistan simply melted away before a less well equipped but better motivated Taliban.

There is a clear connection between these disasters. It had become clear to me during visits to Baghdad and Kabul that America had not learned the lessons of Vietnam. There has been a strong element of hubris in American foreign policy.

Harvard’s Stephen Walt put it perfectly when he wrote that after the fall of the Soviet Union, “instead of defending its own shores, maximizing prosperity and well-being at home, Washington sought to remake other countries in its own image and incorporated them into situations and arrangements of its own design.”

Let me step back a moment and put this in a larger historical context. What Walt described is what colonial powers have always done. The Portuguese and the Spanish always dressed up their colonial ambitions as saving souls — converting the heathens to Christianity, making the people they conquered more like themselves. Later the French always claimed their colonial mission was “civilisatrice,” bringing Western civilization to the unenlightened, to make their colonized people more like Frenchmen. And the British, too, claimed they were bringing law and order and enlightenment to what Rudyard Kipling called “new caught, sullen people, half devil and half child.” This was his poem to encourage Americans to “take up the White Man’s burden” and join the empire club after our capture of the Philippines.

When spreading Christianity faded as an imperial cause, Americans began to fixate on spreading democracy to their new caught sullen people, to make other countries more like ourselves often by force: democracy out of the barrel of a gun.

While through our lens we saw the Vietnam war as a fight against Communism, to many Vietnamese we were just another foreign invader, following in the footsteps of the French. We didn’t understand that to many, perhaps most of the people of the world, the struggle against colonialism was more important than the struggle between communism and capitalism.

And likewise, while we saw Afghanistan through the lens of fighting Islamic extremism, too many Afghans saw a struggle against yet another foreign invader not unlike the Russians, and before them the British.

A second link between the disasters of Vietnam and Afghanistan was corruption. We could never curb corruption, and in Afghanistan we contributed to it by flooding the country with more money than the economy could absorb. Corruption drained away support for the government. A friend of mine on an operation with the Afghan army saw officers demanding bribes from the villagers they were supposed to protect.

“Do you think you are going to win the support of the population that way?” My friend asked the officers. “We know, but we had to pay bribes to get our commissions and this is the way we get our money back.”

A third link between the Afghan disaster and Vietnam was that too few Americans bothered to learn the history and culture of the country. Often this was because of a sense of American exceptionalism. I asked a senior American officer in Vietnam if he had ever read about the French experience in Vietnam. He said: “No, why should I. They lost didn’t they?” Robert McNamara admitted after the war that he had never understood Vietnamese culture and history. But by then it was too late. We had already lost that war.

In Iraq I found that many Americans did not have any appreciation of the great schism in the Muslim religion between Sunni and Shia. Many didn’t care to know. They were Americans and they were going to bring American democracy to Iraq. My friend Tony Shadid, of the Boston Globe and later the New York Times, who died covering Syria, once overheard Iraqi soldiers talking among themselves. They didn’t know Tony was fluent in Arabic. One was saying to the others: “I know I am a bad Muslim fighting for foreigners but I need the money.”

The invasion of Iraq was the result of magical thinking among the neoconservatives. They believed that if they could transform Iraq into something resembling America then the entire Middle East would follow suit, and autocracies would crumble and become American style democracies. Henry Kissinger, who was originally in favor of the Iraq war, later wrote that seeking to impose American values by military occupation in a part of the world where they had no historical roots, and expecting fundamental political change in a politically relevant period of time, “proved beyond what the American public would support and what Iraqi society could accommodate.”

In Kabul I interviewed the Russian ambassador. He had been in the Soviet administration during the Soviet occupation, and now he was ambassador to Kabul during the American occupation. He said we Americans were making the same mistake the Russians had made. You thought that every Afghan if he had a choice would like to be an American, and some do. And we thought that every Afghan in his heart would like to be a communist, and some did. But you think that purple ink on an Afghan’s finger is the answer to a thousand years of ethnic and tribal rivalry.

Another link between Afghanistan and Vietnam was American self-deception, or as some would call it, lies. In Vietnam there was always a light at the end of the tunnel. We were always winning the war. It became so ridiculous that we called official briefings the five o’clock follies after the hour when the military briefed the press every day.

In Afghanistan I found the same. We were always “turning the corner,” we were always on the way to winning the war.

The American military’s can-do sprit, so attractive in one sense, became a mill stone in our losing wars. Our military may have known the wars were hopeless, but weren’t about to admit it. Defeatism was unacceptable. Is it always darkest before the dawn they told themselves. The old saying “the difficult will be done promptly, the impossible will take a little longer” is ingrained in the military. And had not Julius Caesar said “It’s hubris only if I lose?” There was no incentive in the military tradition to say, sorry the task you have set for us can’t be done.

When I was in Baghdad I met General Martin Dempsey, later chairman of the joint chiefs, but then in charge of training the Iraqi Army. He said it is comparatively easy to train a man to fight. Harder to master logistics, keeping an army fed and supplied with ammunition. But what we can’t do is instill in Iraqis the motivation to fight. Only the Iraqis can do that for themselves.

I also felt that in both Afghanistan and Vietnam we were equipping our clients to fight big complicated wars, not the light infantry wars that our opponents were fighting. We created a dependency that need not have been. I was truly shocked to read that, after 20 years, the Afghans were still completely dependent on American contractors to service their aircraft. Couldn’t we have trained the Afghans to service their own planes?

As for Afghans, they were not an enemy you want to fight on their own turf with the Afghan tradition of jihad against foreign invaders. They were masters of terrain. And talk about a military tradition, when the Waziristan campaign of 1936 was over, and when the British were handing out medals to their troops, the Waziris came to the British and said: where are our medals?

What are you talking about? said the British. You were the enemy.

Maybe so, said the Waziris, but you couldn’t have had a Waziristan campaign without us.

Were the American military and civilian briefers lying to us when they told us how they were winning these wars when they were not? There were plenty of outright lies, God knows, but I prefer Sebastian Junger’s description of the military and political briefings Americans gave in Kabul. “Rather than outright lying, they were inviting you to join a conspiracy of wishful thinking.”

When Saigon fell and the Vietnam war was over, S. Rajaratman, foreign minister of Singapore and a great friend of America, said that the true meaning of the war’s end was not that the communists had won — he was decidedly anti-communist — but that for the first time in 400 years there were no foreign armies in Southeast Asia.

Maybe something similar is being said even by America’s friends now that we are out of Afghanistan.

This essay was adapted from remarks Greenway made at an event at Boston University in October.