The growth of China will be relatively positive. But in the next 10 years, it is predicted that China’s economic growth will only stay at around 5 percent.

Some people say the year 2021 is witnessing the world economy obviously walking out of its darkest moment.

They are perhaps right if we look at the numbers. Based on the predictions of multiple agencies, world economic growth is expected to stand at 6 percent this year, with the growth of China, the US, the Euro zone, the UK and emerging economies at 8.1 percent, 7 percent, 4.6 percent, 7 percent and 6.3 percent, respectively. 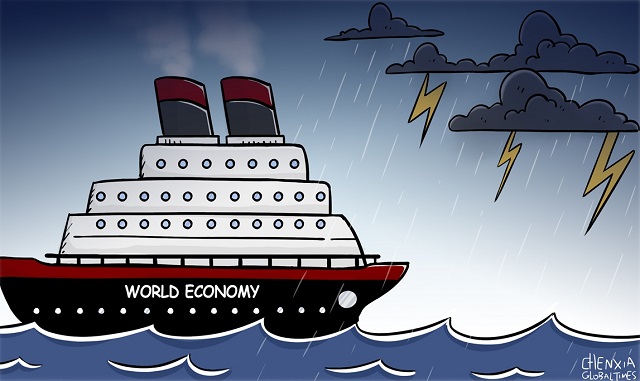 The figures look pretty good, but don’t forget that these are referenced against 2020 figures. Last year, the global economy shrank 4.7-5 percent. This means that we are unlikely to go back to pre-pandemic levels for the whole sum of 2021. In a foreseeable future toward 2022, 2023, 2024 or even longer, the world economy will be in a worrying gloomy period. I term these as “three lows” and “three highs.”

By contrast, the growth of China will be relatively positive. But in the next 10 years, it is predicted that China’s economic growth will only stay at around 5 percent.

In the future, there will be more and more countries whose growth will stay around 1 percent, or below 2 percent. There will hardly be any driving force for explosive growth in areas such as investment, trade and consumption. In the early years of the 21st century, the average growth of the world economy averaged between 4 and 4.5 percent. But that era has gone.

Low employment. According to UN reports, 255 million full-time jobs were lost across the globe last year. Extreme poverty rates surged from 8.4 percent in 2019 to 9.5 percent in 2020. One year and a half since the COVID-19 pandemic broke out, some countries have adapted to it. Aviation, tourism, entertainment and sports industries seem to be recovering. But in the foreseeable future, the world will hardly resume the sort of prosperity it has witnessed at the beginning of the 21st century.

Low employment is a severe test of consumption-centered modern economics. The increase of middle- and low-income people may lead to feeble consumption growth, with the consumption of high-income people coming to its lowest point. Meanwhile, we should keep alert of heresy with raising fears of “war creates consumption.” The 2030 UN Sustainable Development Goals may not be achieved either.

Low profits. The negative bond yield of the world in 2020 got as high as $18 trillion. Geopolitical risks, devaluation of competitive currencies, trade and investment protectionism have all pushed the world to a low-income state of affairs. The low profitability of the European and American economy also affects China. In recent years, the profitability rate of China’s financial products decreased from 5 percent five years ago to around 3.5 percent today. It is anticipated that we will witness lower ebbs in this era of the world economy.

In addition to the “lows,” there are also “highs.”

High risks. The COVID-19 pandemic is not yet over. The US and European countries are going through their fourth waves. But some countries have completely lifted their restrictions. They believe that although Delta variant is highly contagious, the death rate caused by the virus is low. So they are dealing with the virus like how they cope with influenza. But in the eyes of the Chinese people, the impact of the COVID-19 pandemic will exist for a long time. The alarm is not supposed to be lifted before we reach a breakthrough in vaccines. The Chinese policy of zero tolerance of COVID-19 has been criticized by some European and US media outlets because the West is anxious. The anxiety can easily lead to the next wave of populism, extremism and terrorism. As a result, the risks that the world economy faces will also be much higher than in the past. These include risks to food, debt, finance, energy risks, climate, and so on.

High inflation. Since the outbreak of the pandemic, the US has been working hard to in save the stock market instead of lives. Quite a few stimulus policies of quantitative easing have been carried out, with US inflation running high. “Prices rose 5.4 percent in July compared with a year ago,” reported the Washington Post on August 11.

For the world, there is a trend of economic risks. Many countries are witnessing turbulence in financial markets. The US stock market might be flourishing now, but a financial crisis that is several times severer than that the one in 2008 is approaching. This is why China has maintained a high degree of vigilance against inflation and financial risks in recent years.

High debt. The national debt of the US is about $30 trillion. US debt to its GDP ratio has continued to rise over the past 100 years. It is paying for the current expenditures by overdrafts. According to reports, US corporate bankruptcies reached their worst levels in 10 years in 2020 amid COVID-19 pandemic. The number of people in the middle classes decreases across the globe with declines in family happiness, birthrates, and so on, which may, in turn, deteriorate global sluggish economy. China is adopting fierce economic reforms. But the efforts are conducted in the pursuit of high-quality development to avoid debt traps.

In sum, there are many concerns for the global economic outlook in years to come. But there is still cautious optimism and confidence for global cooperation. The world is urgently in need of the emergence of great leaders, major countries and big strategies to lead mankind out of the downward development trend that has started since 2008. The pandemic can be regarded as the bottom of human development over the past century.

Apart from global cooperation, we also need innovations. Science and technology are primary productive forces. Innovations can reduce costs, generate new demand, and with it, we can be optimistic that economic growth will lead us to a new future. In the end, countries should stick to the path toward development, helping people in developing countries improve their lives. Only in that way can we see new hope in the world economy. It is also the hope for the multilateralism.

The author is a professor and executive dean of Chongyang Institute for Financial Studies at Renmin University of China.