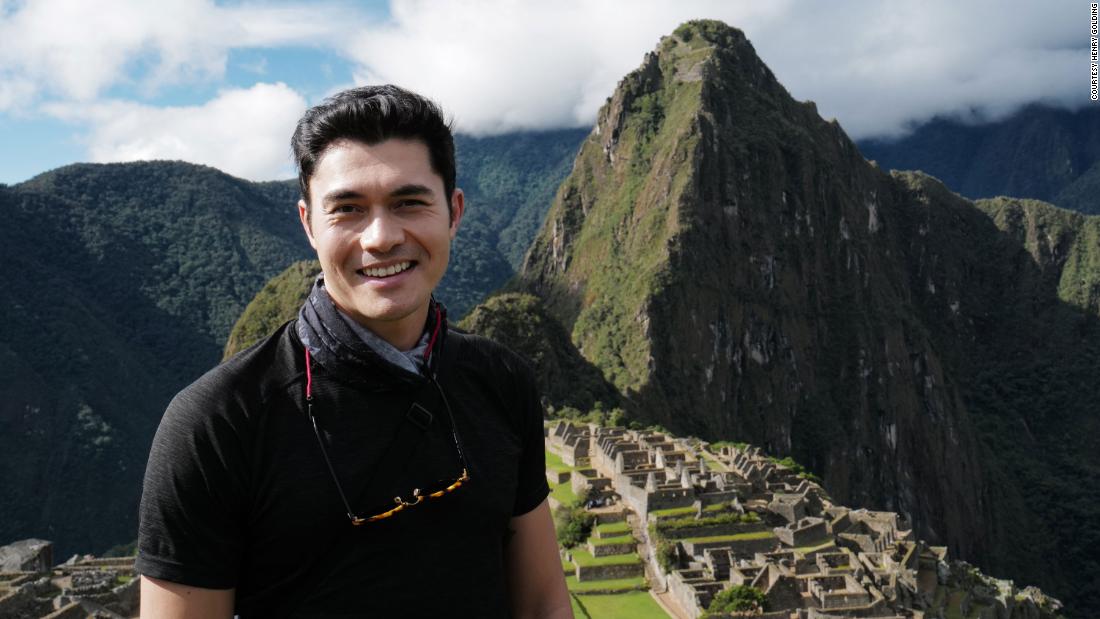 But before he was the star of blockbuster movies like “Crazy Rich Asians,” British-Malaysian Golding hosted the BBC’s aptly named “The Travel Show.”
When it comes to personal travel, though, Golding does have a few rules — invest in a quality camera, never wear Birkenstocks with socks and always eat street food.

The frequent jetsetter tells CNN Travel he has a “go bag” handy so he can always be ready to leave in a hurry. Besides his go-to Chuck Taylors, the bag is full of “fast-drying trousers, quick-drying shirts, cool jackets. Even cotton shirts in really humid places just don’t work. You get completely saturated with sweat.”

Next step: devices. Golding always travels with a tablet in addition to his phone.

“Your phone is probably one of the greatest companions,” he says. “It’s your lifeline sometimes. Gives you your directions, gives you the reviews of the restaurants, the insider tips as to where to go.”

Devices aren’t just about pure utility, though. On top of that, he advises toting a portable speaker.

“Sometimes just sitting and with a bit of music playing, having a picnic out overlooking a lake or a river of some sort, just chilling out in the park and taking a moment to relax. That’s one of the joys of traveling,” says Golding.

Getting to travel for work can be an incredible perk, but it doesn’t always mean a free vacation. If Golding has a day off from shooting, he uses it to embrace his two favorite parts of travel — food and photography.

But if you’re going to eat at a sit-down restaurant, Golding says it’s hard to go wrong in Japan.

“Japan has such attention to detail. One of the best pizzas I’ve ever had in my life is in Tokyo, a place called Savoy in Moto Azabu (district). I go there religiously when I’m back there. It’s just because they understand the intricacies of ensuring it’s authentic — not only technique, but ingredients.”

Golding believes that some of the beauty of travel is in its ephemeral nature. His two favorite things to bring back are pictures and memories. And while he often chats up locals while abroad, those new connections don’t always translate into lifelong friendships — and it’s okay.

“I don’t think you should shy away from being a part of somebody’s life in such an impactful way that you never forget them, but understand that sometimes goodbye is forever. You don’t feel sad about it. You just feel as though you’ve left or you and them have left a lasting impression. And I think that’s good enough.”

When it comes to his own travel memories, a few countries stand out, such as Croatia, where he and wife Liv Lo spent their honeymoon. Golding also shouts out Sri Lanka as an underrated Asia destination.

“It has everything from surfable waves, to beautiful forts to walk around, to safaris that you can do. We saw leopards and elephants there. It’s just one of those hidden gems.”

So …. he has great taste in food, makes friends everywhere he goes and gets paid to visit some of the coolest places in the world? That doesn’t mean Golding has never made a travel error when on the road.

Yes, even a movie star can still fall prey to a scam.

One day in New Delhi, a man tapped Golding on the shoulder and told him to look down at his shoe, which suddenly had a huge green blob on it.

Before he knew it, Golding was being whisked off to the man’s friend, who had a “special way” of removing the stain, which he then charged him for. While the first man had claimed a bird was responsible for the damage, Golding figured out that it was a pretty common travel scam.

Luckily, it only ended up costing him about $5 — and some embarrassment.

Most recently, Golding has partnered with the app Affirm, which helps users get a handle on their finances and save up for big purchases like vacations. Considering how many people are planning big bucket list trips now that international borders are beginning to reopen, the timing couldn’t be better.

“Travel is definitely medicine for the soul.”