Cautious cooperation, lingering distrust, and outright conflict have characterized the Sino-Russian relationship for hundreds of years. But alongside natural reasons to collaborate, a shared animosity toward the United States ensures positive relations will endure.

The 21st century has seen the forging of “cooperative” relations between China and Russia, with the benefits of this new partnership outweighing the historical differences between these two countries that share a mutual goal to diminish the dominance of the United States in world affairs. 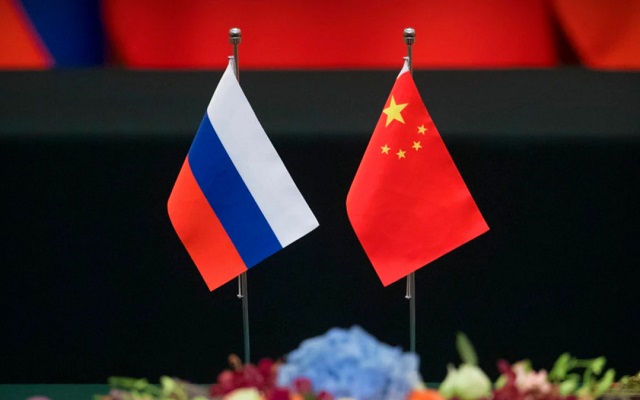 China and Russia have historically shared a fractured relationship, where together with Japan, Western European empires, and the United States, Russia imposed what came to be known as a series of “unequal treaties” on China in the 19th and early 20th centuries. Foreign states forced China to acquiesce to most of their trade and territorial demands, and unlike the other powers, Russia’s shared land border with China amplified the threat Russia posed to China.

Soviet support for the Chinese Communist Party in the Chinese civil war, alongside mutual efforts to foment a global communist revolution, instigated a brief period of Sino-Soviet cooperation after the 1920s. But following Joseph Stalin’s death in 1953 and Soviet attempts to promote de-Stalinization, relations soured between China and the Soviet Union. The ensuing Sino-Soviet split resulted in deadly border clashes and rival attempts to assume leadership of the communist world. U.S. President Richard Nixon’s normalization of relations with China in the 1970s revealed how far Sino-Soviet relations had devolved.

The Soviet collapse, however, instigated a rapprochement between Beijing and Moscow. Russia, clearly the weaker country following the dissolution of the USSR, chose to resolve its outstanding border disputes in China’s favor, clearing the way for positive relations. Additionally, the ideological rivalry stemming from Beijing and Moscow’s competing desire to lead the communist world waned as the ideology was abandoned in the former Soviet Union and was altered through reforms in China. In 2001, China and Russia signed a treaty of “friendship and cooperation,” which was renewed again in 2021. While areas of tension between these two countries remain even now, Beijing and Moscow have continued to nurture constructive relations to promote their shared diplomatic, economic, political, and military interests, and, most importantly, their mutual desire to undermine the U.S. power in world affairs. “Both China and Russia feel the U.S. is a hypocritical aggressor who is intent on diminishing them in order to maintain hegemony,” said Einar Tangen, a Beijing-based political analyst, according to an article in Al Jazeera.

Meanwhile, economics forms a core part of the modern Chinese-Russian partnership. Trade between China and Russia reached $100 billion for the first time in 2018, and both countries intend to increase that to $200 billion by 2024. Their shared land border provides China and Russia with the added benefit of helping each other to bypass the U.S.-controlled global sea lanes. Most of the trade between China and Russia has been based on energy exports, with Russia’s oil, natural gas, and other commodities becoming essential for China’s massive and growing economy, while Chinese exports to Russia largely consist of machinery and electronics. Another aspect of the increasing alliance between these two countries is the loans provided by China to Russia. These loans have become particularly beneficial for Russia, which has faced greater hurdles accessing credit since the imposition of Western sanctions in 2014 “in response to Moscow’s continued backing for separatists in eastern Ukraine,” according to the Guardian.

China and Russia have also committed to a strategy to “de-dollarize” international trade and lower their vulnerability to U.S. sanctions. Data from Russia’s Central Bank and Federal Customs Service show that in the first quarter of 2020, “the [U.S.] dollar’s share of trade between Russia and China fell below 50 percent for the first time on record,” according to the Financial Times, compared to 2015, when “approximately 90 percent of bilateral transactions [between Russia and China] were conducted in dollars.” Instead, recently, trade between these two countries has been conducted mainly in euros, the Russian ruble, and the Chinese renminbi.

Having committed to reducing their dependence on the U.S. dollar, Beijing and Moscow have also sought to bypass the U.S.-dominated Society for Worldwide Interbank Financial Telecommunication (SWIFT) payment system. After several Russian banks were blacklisted from SWIFT in 2014 (alongside threats to ban Russia altogether), the Russian government introduced the National Payment Card System, now known as Mir, to process card transactions within Russia. While international transactions can be increasingly used with “cards co-branded with the international Maestro system, Chinese UnionPay, and Japanese JCB,” Russia also introduced the System for Transfer of Financial Messages (SPFS) in 2014 to replicate SWIFT. Though mostly used by Russian banks, the Bank of China is also connected to SPFS.

In addition, China launched the Cross-Border Interbank Payment System (CIPS) in 2015, and 23 Russian banks have since joined the system. Both services only process a fraction of SWIFT’s total transactions. But the EU’s introduction of its own payment system in 2019, the Instrument in Support of Trade Exchanges (INSTEX), and Chinese-Russian offers to work with it, have eroded traditional perceptions of SWIFT’s unrivaled dominance of international trade.

Russia has also enjoyed strong sales of its military equipment to China as the latter has sustained a steady arms buildup over the last two decades, particularly as Western firms often face restrictions on exports to China. As China’s largest foreign supplier of military equipment, Russia has helped China achieve significant area denial (A2/AD) capabilities off the Chinese coast and shift the balance of power between U.S. and Chinese forces in East Asia. Joint Chinese-Russian military drills, which have increased considerably over the last decade, have meanwhile served to challenge conventional perceptions of U.S. military dominance in the Asia-Pacific.

Diplomatically, China and Russia have sought to support one another in international organizations. At the United Nations, China and Russia often vote together on crucial issues, such as those regarding Syria or Hong Kong. In addition, Beijing and Moscow have sought to use their own international bodies, such as the eight-member Shanghai Cooperation Organization (SCO), created in 2001, to regulate international affairs without the interference of Western states. China and Russia have also given support to so-called “rogue states,” including Venezuela, Iran, Syria, and North Korea. Arms agreements, diplomatic support, debt relief, and other measures have helped China and Russia undermine U.S. attempts to isolate and weaken these countries, helping coordinate global opposition to the U.S. order.

Despite their common objectives and natural avenues of cooperation, several issues between China and Russia persist. China has reduced its military imports from Russia in the last few years and has developed a domestic industry capable of competing with Russia’s in international markets. And though Russia maintains the military edge in Central Asia, China’s use of private military companies to secure its Belt and Road Initiative (BRI) projects has begun to challenge Russia’s traditional military dominance in the region.

Chinese investments in Central Asia and the rest of the former Soviet Union have also eroded Russia’s economic dominance in its traditional sphere of influence. Additionally, China’s growing energy demands have allowed Central Asian energy exporters to diversify away from Russia-controlled energy infrastructure and explore other European markets. And while Russia has so far managed to convince Mongolia and Central Asian states to maintain their railway gauges to the Russian standard (thus ensuring the Kremlin’s influence over their cross-border rail trade), Chinese attempts to alter the status quo show another area of competition between China and Russia. Russia’s territorial acquisitions in outer Manchuria in the 1800s are also a source of contention in some political circles in Beijing, with both the Treaty of Aigun and Treaty of Peking considered among the “unequal treaties.”

Nonetheless, the current benefits of the Chinese-Russian relationship outweigh any motives to jeopardize it. Russia’s need to diversify resources and financial flows fits neatly with China’s demand for energy. Both countries are wary of being isolated from the world’s other major powers and seek to legitimize their interests on the international stage. Along with the sense of security of having a positive partnership with a powerful neighbor, their common desire to challenge the United States in world affairs has led to relations between the two countries that Chinese and Russian leaders describe as “the best in history.”

As the Arctic opens up as a viable trade route, Beijing and Moscow are likely to find further reasons to merge politically and economically. Meanwhile, China’s respect for the Russian-led Collective Security Treaty Organization (CSTO) and Eurasian Economic Union (EAEU) may help Beijing and Moscow reach a suitable compromise that allows China to help develop Russia’s traditional sphere of influence. Chinese and Russian wariness over their complicated past will therefore not be enough to undo their current cooperation and risk their future opportunities.