Once again, we are reminded how far this nation has descended into the abyss. This time the sickeningly familiar ritual of savage violence was enacted in Sialkot where Priyantha Kumara Diyawadana, a Sri Lankan national, was beaten to death on Friday over blasphemy allegations at the factory where he worked as a manager. 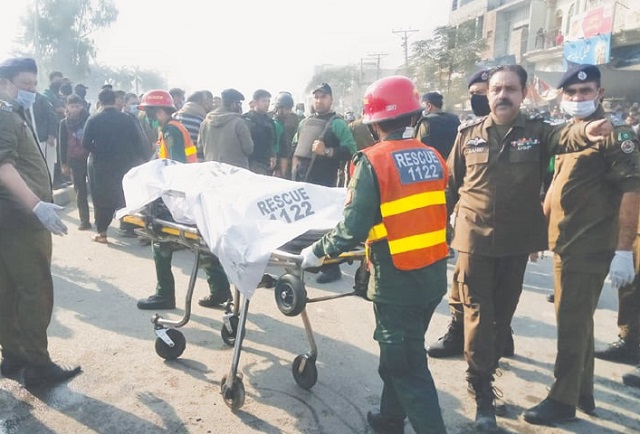 The mob then dragged his mangled body out on the road and set it on fire, where individuals on the scene — as if to underscore their utter lack of humanity — took selfies with the burning corpse. Where were law-enforcement personnel who should have protected Mr Diyawadana? How was the situation allowed to escalate to the point it did? What followed the grisly murder was predictable: condemnation by the political leadership, with the government vowing to punish the perpetrators to the fullest extent of the law. The army chief too, almost certainly because the victim was a foreign national, denounced “such extrajudicial vigilantism”.

For the same reason perhaps, religious bodies have also shown alacrity where they usually maintain a deafening silence and issued statements to condemn the lynching. Most ironic among them is the Tehreek-i-Labbaik Pakistan, the ultra-right group that proudly claims as its inspiration a man who committed murder in the name of blasphemy.

It is indeed a day of shame for Pakistan. Having repeatedly vented our bloodlust on our own, this time the extremists amongst us turned on an individual who was a guest in this country. Not surprisingly, however, the official denunciations only touch upon the here and now, the tip of the iceberg. The bitter truth is, on the last day of his life, Mr Diyawadana came face to face with the consequences of the Pakistani state’s decades-long policy of appeasing religious extremists. Even though the violent ultra-right outfits once used for strategic objectives began to be reined in a few years ago, other sectarian groups that were radicalised as part of the same process have since gained new ground. As extremism seeped into the body politic, blasphemy increasingly became weaponised, an expedient tool that could be wielded in a variety of situations: to take over the land of minority communities, to settle personal disputes — even to engineer protests to destabilise a sitting government in 2017.

All it takes now is an allegation of blasphemy and an individual or two to incite a mob to commit murder. Who can forget young Mashal Khan, lynched by his fellow students in 2017, or Shama and Shahzad Masih, burned alive in a brick kiln in 2014? These are but three victims in a long chronology of horror. Each act of lynching, each desecration of a place of worship, each life destroyed as a result is an indictment of a state that has long made cynical use of religion as part of its playbook. We must reverse course before the flames of intolerance devour us as a nation.

The piece was originally published in Dawn, December 5th, 2021

If restrictions are imposed on Chinese ship, SL could lose a good friend – Wimal