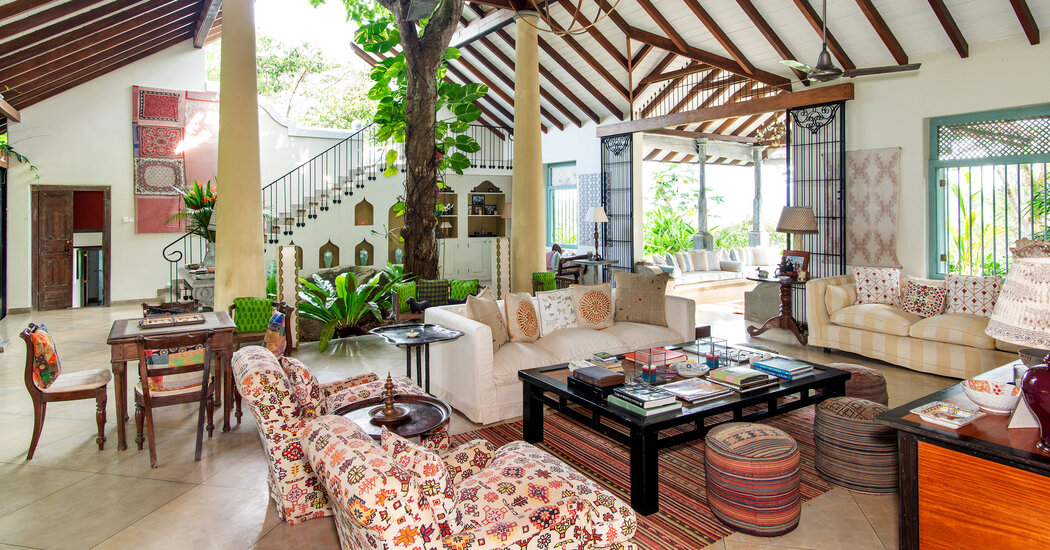 This six-bedroom villa with elements of classical Sri Lankan architecture anchors an eight-acre tea plantation on a hilltop near the city of Galle, on the southern coast of Sri Lanka.

The 8,100-square-foot, two-story villa, called Pokkuluwa, has Indian Ocean views and can be purchased either separately or, for $3.9 million, together with a companion two-bedroom beachfront house about three miles away.

Designed by the owners in collaboration with the Sri Lankan architect Sunela Jayewardene, Pokkuluwa was created by blasting into the hill’s rock and integrating the home’s discreet structures, many open-sided, into the natural tropical environment, said Charlie Wrey, who owns the home with his wife, Tweenie.

The house, which was completed in 2010, sits at an altitude of 800 feet, with an opening in the vaulted ceiling of the living area to accommodate a lofty santol tree. The red clay roof tiles are a nod to the traditional village “wallauwa,” or manor house, while the roof trusses are of sustainable tulang wood and the ceiling planks are Ceylon mahogany, Mr. Wrey said.

“The house is definitely a fusion of architectural styles and themes, but Sri Lankan in its open flow from in to out,” he said. “There are classical Dutch elements, common on Sri Lanka’s southern coast, with grand pillars along with much of the styling of the house.”

The Wreys planned every detail in the elegantly furnished estate, including its colorful textiles, which they designed and had printed by local artisans on traditional Sri Lankan handlooms. Furniture and fittings are not included in the home’s asking price, but are negotiable, Mr. Wrey said.

A jungle driveway leads to an outdoor parking area a short stroll from a long veranda with colonial planter’s chairs and cane sofas adjoining Pokkuluwa’s 1,200-square-foot main living area. Straight ahead is an open-sided pavilion with polished titanium bench sofas surrounded by a lily pond with paddy views, while stairs to the left of the santol tree ascend to a rooftop terrace. To the right is a kitchen with a large island, along with an open-sided dining area with a soaring ceiling. The kitchen also opens to a covered veranda for dining.

The left wing of the house has an air-conditioned TV room and the main suite. The open-air main bathroom features natural rocks and flowering shrubs sheltering two showers and a molded stone bath. The main bedroom has a sitting area and doors leading to a veranda overlooking the 53-by-18-foot L-shaped swimming pool with an infinity edge. Stairs lead to a lower terrace level shaded by trees and furnished for dining.

“The master bedroom serves in effect as its own little apartment that can be neatly sealed off, which is ideal when renting the house,” Mr. Wrey said.

Beyond the kitchen and dining areas is a courtyard surrounded by discreet structures housing four bedrooms with en suite bathrooms, one on the second floor with a free-standing bath tub on its balcony. All the 1930s steel bathtubs were recycled from the Galle Face Hotel in Colombo, Sri Lanka’s capital and largest city. Furnishings include Ceylonese antiques, and one bedroom has a day bed molded into a natural rock. A loggia off the courtyard leads to a free-standing structure housing a sixth bedroom with an en suite bathroom and a massage room. There is also a bungalow for practicing yoga.

The eight-acre plantation, overseen by a manager, grows tea, cinnamon, pepper and fruit including mangoes, avocados and pineapples. There are monkeys, peacocks and other exotic birds. A separate dwelling on the estate is for staff.

The companion beach house, which has two bedrooms with en suite bathrooms and sits on an 8,700-square-foot beachfront lot, was completed in 2011 and, like the main house, borrows from classical Dutch colonial design with columns and an open veranda, Mr. Wrey said.

Both properties are less than 10 miles from the city of Galle, with about 93,000 residents, the largest city of Southern Province, one of Sri Lanka’s nine provinces. Nearby Unawatuna Beach has cafes, bars and shops along with scuba diving, and there is surfing all along the coast, especially at Hikkaduwa, Weligama and Mirissa, which also has whale watching. Yala National Park is about 88 miles east of Pokkuluwa.

Colombo, with about 5.6 million residents, is 80 miles north of Pokkuluwa, and the international airport is a two-hour drive away. There is also the option of a 35-minute flight on a seaplane to Colombo from Koggala Lake, which is a 15-minute drive from Pokkuluwa, said Max Duddy, co-founder of The New Sri Lankan House, a Colombo-based real estate agency that has the Pokkuluwa listing.

Sri Lanka, with about 22 million residents, is a tropical island nation in the Indian Ocean, about 40 miles off the coast of southeast India. Since a 26-year civil war ended in 2009, the country has seen infrastructure improvements, such as a highway linking Colombo with Galle to the south. Sri Lanka has grown in popularity as a second-home destination for foreigners, despite such tragedies as the 2004 Indian Ocean tsunami and the Easter Sunday bombings of 2019, both of which caused mass casualties.

Much of the country’s appeal has to do with a warm year-round climate, gorgeous beaches, exotic jungle locales, picturesque paddy fields and a population that to a great extent speaks English, brokers said.

“Sri Lanka has a lot of very friendly people who are very hospitable,” said Pranesh Paramanantha, a real estate professional with Sri Lanka Sotheby’s International Realty. “There are a lot of tourists who are really attracted to this country, and tourism is a major driving factor for the real estate market.”

However, just as tourism was recovering in the fourth quarter of 2019 from the Easter attacks earlier that year, Sri Lanka saw its first coronavirus case in January 2020 and began restricting travel from certain countries in March.

With tourists absent, some foreign homeowners in Sri Lanka put their homes on the market, as they could no longer generate rental income, and throughout the pandemic, locals have been scrambling to buy those luxury properties, said Ivan Robinson, the director of Lanka Real Estate.

“The locals are investing in real estate as a hedge against inflation and depreciation of the Sri Lankan rupee,” Mr. Robinson said, “the idea being that once the pandemic is over, the locals will be able to sell to foreign investors at a U.S. dollar value rather than a Sri Lankan rupee value.”

Mr. Duddy said that he’s seen that same local fervor for higher-value properties, both in Colombo and in coastal areas such as Galle. “We’ve felt a twin impact of foreign buyers, for practical reasons, disappearing almost altogether, but local demand really picking up,” he said.

The country is now recovering from its third and most intense wave of the coronavirus, which peaked this past May and June. But the real estate market has remained stable, brokers said. Lanka Property Web housing price index shows that the average house price in Sri Lanka grew by 20.7 percent year over year in the first quarter of 2021.

Steady price growth has spurred many Sri Lankans to continue buying properties despite the uncertainty of the pandemic, Mr. Pranesh said: “Sri Lankan buyers have seen good returns over the years, with real estate prices constantly shooting up, so they’re continuing to have a reason to invest.”

Beach villas with three or four bedrooms typically range from $1 million to $5 million, or about $200 a square foot, Mr. Robinson said. There are still deals to be had: High-end villas with swimming pools located inland on the southwest coast can be found for as little as $270,000, he said.

Who Buys in Sri Lanka

Foreigners typically buy in the Colombo area, as well as coastal locations. In the past decade, the southwestern coast of Sri Lanka has been especially popular with foreign buyers, though interest has gradually moved east toward the cities of Weligama, Matara and Tangalle, Mr. Duddy said.

In recent years, he said, growing numbers of German, French and Italian buyers have joined what had been mostly British and Dutch buyers.

“A lot of foreign buyers have come from existing European expat locations like Hong Kong and Singapore,” he said. “We’re also seeing interest from Australia and New Zealand, with buyers there perhaps starting to see Southeast Asian countries closer to home as a little crowded.”

There are many Sri Lankan expats who invest in properties, mostly from Canada, Australia, Britain and the United States, Mr. Pranesh said.

Currently, foreigners cannot buy freehold land in Sri Lanka directly, though there have been many changes to a 2013 law restricting property purchases.

Foreigners can acquire land on a long-term leasehold basis or establish a Sri Lankan company to acquire the property with a local trustee holding at least 50 percent of the shares, Mr. Duddy said.

Foreigners can purchase most condo units directly, though the definition of a condominium can be murky, including “some villa developments with shared spaces,” Mr. Duddy said.

Because the Wreys purchased Pokkuluwa under a company structure before the 2013 law, foreigners would be able to purchase the property directly in their own name by simply buying the company’s shares, Mr. Duddy said.

While Sri Lanka currently has a stamp duty of about 4 percent, there is no stamp duty on share transfers, he said.

Company incorporation costs are variable, but for most holiday home purchases, the cost is about $1,500, Mr. Robinson said.

While real estate listings are usually in U.S. dollars, sales transactions are always registered in Sri Lankan rupees, he said. Sellers typically pay the real estate agent commission of 3 to 5 percent. There are few if any Sri Lankan banks that offer mortgages to foreigners, brokers said.

There are no annual property taxes on Pokkuluwa or the companion beach house, Mr. Wrey said.