Christmas Day is still really quite important, but people are now more determined not to take any risks with the raging virus and with their health this time.

Christmas is still not Christmas in UK with Omicron invading. Hammered by Christmas party booking cancellations, people are staying at home in the run up to Christmas Day. Firms in the hospitality and entertainment sectors have called out for clarity in guidelines and for financial support. The Chancellor of the Exchequer, Rishi Sunak has obliged and set a sum of £1 million as a handout, which like Scrooge, they say “they want more”. 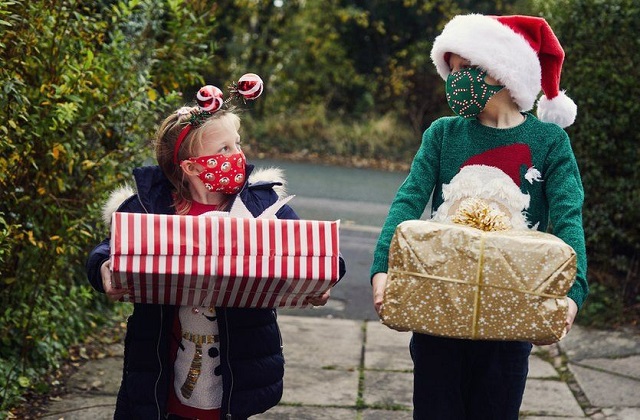 When families get together this Christmas Day it will be out in their gardens perhaps, wearing fancy face masks, thermals and “long johns and pullovers”, rather than under the mistletoe. They will be visiting parks after having their Christmas Dinners delivered from Restaurants on motorbikes by “Deliveroo” and “Just Eat” deliverymen. It seems not the usual festival.

Christmas Day is still really quite important, but people are now more determined not to take any risks with the raging virus and with their health this time. Many plan to toast the season not in the company of family and friends, but with neighbours who have been helpful, perhaps, collecting Amazon parcels over the year whilst they were out.

My next door neighbour said: “We’re going for it, we’ve put loads of Christmas lights outside our home, out in our Gazebo, we’ll get wrapped up and eat Christmas Dinner (which in England is lunch) outdoors. We’ll not miss a few Sherries and have the turkey trimmings,” pulling crackers and don paper hats, hoping for the best in the New Year.”

Many others will be crossing their fingers, and carrying on with family plans as usual, now with the Government not ordered a shut-down, but having a close eye on what is permitted in their area. While for still others, this Christmas will be smaller, simpler and slimmer, using some ingenuity to liven the day.

Among the celebrations were some weird customs too. The number of people, guests at the Dinner Table must be an even number, or the partner, or the one without a partner, was doomed in the New Year. The Victorians invented the tradition of sending “creepy” Christmas cards, though their taste in seasonally appropriate art was sometimes unusual. Dead birds, terrifying clowns, toothless women beggars, were just a few strange images that appear on Cards from that era.

During World War I, (1914) there was the Shoe Box Appeal, when Princess Maryraised money to send embossed “brass tins” to the sailors and soldiers fighting in the war. They were a gift from the nation for Christmas. The Brass Tins contained tobacco, clothing, sweets and chocolate, plum pudding, reading material and games. They were collected by the “Great and the Good” and sent to the war front.

Christmas last year 2020 and this year

COVID rules and restrictions last year, permitted gatherings under 3 households.With no apparent strict guidelines, at least in England this year, people are more cautious scaling back and rethinking their plans. Cutting back on unnecessary socialising in response is the mood. Christmas Britain this year, is more likely to be by “Zoom meetings” to connect with their extended family and friends, chatting and watching Television Christmas programs and of course watching Christmas Eve “Carols from Kings,” Kings College, Cambridge.

How to ruin Christmas is a 2020 South African Netflix comedy TV Show in Zulu and English. It has not come to the theatre land in London, but it is going to be watched on Netflix. It is about a prodigal daughter Tumi, who tries “to make things right” after completely ruining what should have been her sister’s picture perfect Christmas wedding.

How to ruin Christmas in London was on the minds of some in Boris Johnson’s Government. In fact many people have changed their minds altogether and are more focussed on getting “booster jabs” instead, at all available open centres in London and at outstations hospitals and even at football grounds.

The worry is Omicron might be more transmissible particularly hearing about the fourth vaccine on offer in Israel and now in Germany. Fortunate or not, we arenow told Omicron is 80% less likely to result in hospitalisation and causing 70% less severe illness, “people are ready prepared than last Christmas,” searching and trusting other sources than from their politicians.

Christmas parties many “oldies” believe, is a silly idea, whilst the young are out to make up for the ordeal last year. With no office parties, it is more a personal choice for the young. Most of the 100,000 Booster Vaccine take-up in a day in London, was by the young, who now worry the most.Although laws, rules, regulations vary up and down the country, in England at least it is the choice of each individual, how to make their decision, how they will celebrate Christmas. They seem not to be railroaded into “doing or not doing anything.”

For all, Omicron has changed the way they celebrate Christmas. Although the pandemic has affected everyone in different ways, the non-vocal message is that the pandemic has impacted the mental health, mostly of the youth.

Addressing loneliness at Christmas was traditionally reserved for those “homeless sleeping on the street pavements,” in big towns and cities, but now there is a new dimension. Youth are findingthemselves lonely, and deserted.  The feeling of not being able to make contact with their friends, their chums / mates, or staying occupied is the most important feature.Empty time often can move slowly for the young. Many young people this Christmas are becoming rather adventurous. They want to be engaged and are volunteering their services at Vaccination centres. Some are signing up with “Deliveroo” and at Amazon Delivery Centres.

Pandemic fatigue is not mentioned in public at Christmastime. People are desperate to get back to normal life. Both young and old are getting tired of restrictions. But, find there is “No Normal” with Omicron anymore. One way to avoid stress is by work-outs and exercise. Young people are using their “E-Scooters” to get out and about. Here again, TFL (Transport for London) has forbidden e-bicycles on Underground and Trains, as fire risk.

What has remained a part of Christmas?

The giving of Toys have always been big business as presents at Christmas. Irrespective of the pandemic, sales of toys are hitting over Euro 85 billion in 2020 according to reports. It is set to be another bumper year this Christmas. Despite some news that Video Games have “killed”the ‘toys as gifts at Christmas’.

The new trend in 2021 is the so called ‘kidult’ toys have surged in popularity. Young adults are looking to their childhood toys for comfort and nostalgia this Christmas according to the papers. Young Adults between 19 and 29 have swept Hamley’s Toy Shop in London’s West End. Whether it is the Train set of the 1970’s or the Transformers from 1980’s, increasing number of ‘kidults’ are rejecting or bored with digital experiences and reconnecting with physical play toys. Things like “Lego,” “Pokemon” for boys and men and “Barbie” dolls for girls are much in demand. It seems the pandemic has invoked a new trend, a kind of nostalgia. Traditional board games, like ‘Monopoly’ and ‘Scrabble’ are staging a comeback, bringing families together this Christmas, while pantomimes have been less patronised.

With nights getting colder and midnight Mass and Carols on early Christmas Day at Westminster Cathedral, people are getting back to prayer to save them from another virulent Coronavirus variant in the New Year.