Certainly, India  has done  great service to the cause of Buddhist religion by facilitating the Buddhist devotees to visit and pay their respects to Lord Buddha.

Prime Minister of India Narendra  Modi inaugurated the Kushinagar  international airport in Uttar Pradesh in India , that would connect the  key Buddhist pilgrimage sites in India. 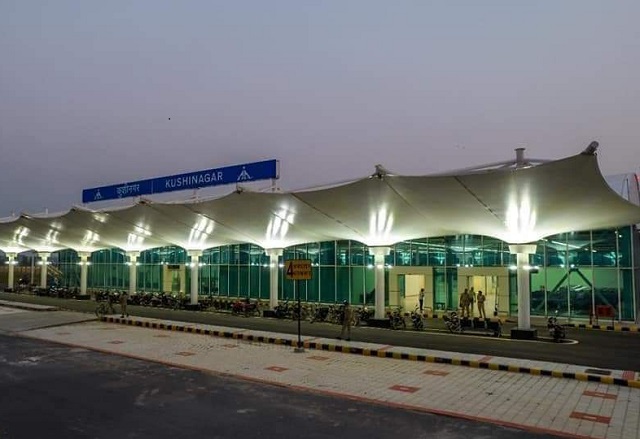 Kushinagar is believed to  be the final resting place of Gautam Buddha  and therefore , is an important Buddhist pilgrimage destination.  Government of India is specially focussing on the development of places associated with Lord Buddha through better connectivity and creation of facilities for devotees  to visit the Buddhist pilgrimage centres in India. . Lumbini , the birth place of    Lord  Buddha, is not far from Kushinagar.  Sarnath, where Lord Buddha gave the first sermon is also within a radius of around 150 kilometre  from Kushinagar.  Bodh Gaya, where Buddha attained enlightenment , is also a few hours drive from Kushinagar.

A large contingent  of Buddhist monks  from different countries were invited for the inaugural programme  of Kushinagar airport.

Tibet is a Buddhist region with great tradition and philosophy reflecting the virtues of Lord Buddha’s teachings. There are several historical Buddhist shrines in Tibet.

India has done the historical and grave mistake of recognising Tibet as part of China. Millions of Indians are very unhappy about Government of India’s ethically and morally wrong decision to approve China’s occupation of Tibet.

China is now one of the biggest adversaries for India in the world ,which is very clear from China’s several observations and acts against India’s interests in the last several years. China  is occupying thousands of kilometre of Indian territory and claims Arunachal Pradesh in India as part of China .  Chinese army  is frequently   intruding  into Indian territory and in the process, several Indian  soldiers have lost their lives  in recent time.

Many in India today think that China will start a war with India sooner or later , to fulfil it’s territorial expansion ambitions.

Even in such circumstances, Government of India    appears to be trying to keep China in good humour  and is  frequently discussing with China about the border disputes,  to  avoid a war like situation with China. Many people in India think that this is an appeasement policy, since China is not reciprocating India’s gestures.

By denying the invitation to the Dalai Lama for inauguration of Kushinagar international airport, it is obvious that  India wants to ensure that  China would not be displeased.  China would have certainly protested if the Dalai Lama have been invited for the programme , as it has been protesting even when any Indian official would meet  the Dalai Lama.

This episode  of India not inviting the  Dalai Lama to this important inaugural programme , that was of  great interests to the Buddhists all over the world ,clearly show that Indian Prime Minister Modi has not acted as per his conscience and  with courage of conviction.  Mr. Modi  has merely acted as an  ordinary  politician  with priority for political expediency and   deliberately not inviting the great and elderly Buddhist monk the Dalai Lama, who has been living in India not very far away from Kushinagar  for several decades. .

To this extent , by  not ensuring the presence of the Dalai Lama in this important programme where several Buddhist monks from various countries were  present, Prime Minister Modi has lost   his much earned positive image as principled leader, to  some extent.

Certainly, we hear the thundering silence of Tibetans around the world craving for free  Tibet ,as to why Mr. Modi is not supporting the cause of free Tibet  by standing upto China and censuring China for occupying Tibet unethically.