The Hindu fanatics are roaming freely and targeting minorities living across the country.

India claims itself as world’s largest democracy, having population of more than one billion. People of all religious communities are living in the country. But, they are facing terrible conditions when it comes to offer religious duties. People cannot perform their religious practices openly in India. As per international standards/ values, mere population and size of a country is not the measure to decide about the fate of any democratic state. A nation must have strong values, inclusiveness and democratic norms so that it can be termed as proper democratic state. 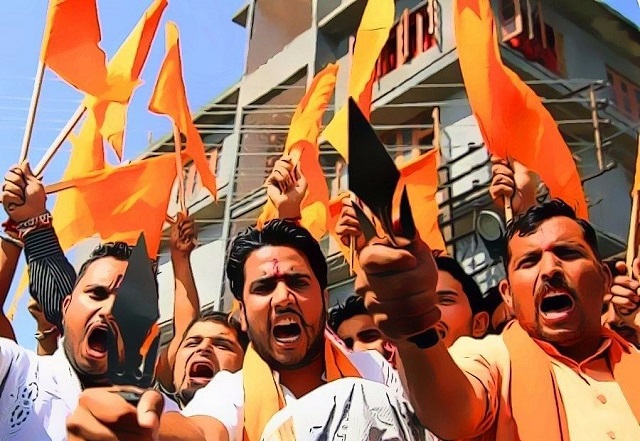 In India’s case, no such value exists. People are being attacked, killed and their properties are vandalized. Indian government is forcefully annexing territories, which clearly exposes its expansionist designs. The cases of Jammu and Kashmir, Junagarh, Hyderabad and Arunachal Pradesh are practical demonstration of Indian expansionist designs. Consequently, hypocrisy is the best suitable word for Indian state. The holy goons of RSS are out in the streets and killing people. India is clear example of authoritarian, undemocratic state with the ultimate rise of Hindutva ideology. It is a state where minorities are being alienated.

The Hindu fanatics are roaming freely and targeting minorities living across the country. These zealots are disrupting prayers and killing non-Muslims in the name of Hindutva ideology. Interestingly, Modi-led nationalist Indian government is fully backing these religious hardliners. Despite these odds against minorities, Modi government is pitching the self-styled mantra of secular India, which is contrary to the concept of Nehrivian secular India. The fact is that Modi government has made the lives of minorities miserable and there seems no place for non-Hindus in India. Even, Sikh community has also become latest victim of Modi’s Hindutva ideology.

Recently, Modi government has passed legislation, aimed at targeting minorities. The bills like NRC and CAA left minorities especially non-Muslims helpless and stateless. Indian government denied millions of people especially Muslims its citizenship. They cannot get Indian nationality because of BJP’s Hindu nationalist approach. They have found it very difficult to live in India under the current terrible Hindutva atmosphere. This approach of Indian government has also triggered another debate regarding the nationalist designs of any state. PM Modi is architecture of this nationalist approach which is making lives of minorities miserable. Likewise, the silence of international community over the oppressions of minorities in India is questionable thing, which provides sheer confidence to Modi government to continue its anti-minority policies.

International human rights organizations are also passing mere statements, condemning Indian government’s actions. These statements are not enough. To stop these discriminatory approaches of Modi government, world must come forward and hold India responsible for its discriminatory behavior against minorities especially Muslims. All these practices are also against the basic rules of democracy. Under current circumstances and nationalist government, it would be wise to say that India has become purely undemocratic authoritarian state, having hardliner Hindus in important policy decisions. The ingress of hardliner Hindus in the power corridor of India is not good omen for regional peace. They kept warmongering approach and pushing for offence tendencies to deal with other than Hindu entities.

Recently, Swedish think termed India as an autocratic state and electoral democracy. The V-Dem Institute, an independent research institute based at University of Gothenburg, has published data-heavy worldwide democracy reports since 2017. In its report, it had observed that India is on the verge of losing its status as a democracy.India is among the countries leading the ‘third wave of autocratisation’, V Dem said, noting that 68% of the world’s population now lives under autocratic regimes. This year’s report, therefore, is titled ‘Autocratization Turns Viral’. The report also vindicates international stance on controlled media strategy in India.

The democracy in India is under severe threat of nationalist Hindus. The incumbent Modi government is taking all steps to accomplish its so called concept of Akhand Bharat (united India). A few months back, US-based non-profit Freedom House downgraded India from a free democracy to a partially free democracy.Not surprisingly, the flurry of downgrades have riled Modi’s government and cast a shadow on the global image of India’s democracy. Even, Indian opposition politicians are criticizing Modi’s policies, which are creating divisions within Indian societies.

At the root of backsliding, in India as elsewhere, is a rejection of core democratic principle that all citizens are equal. India’s BJP champions Hindutva, an ideology that privileges the Hindu majority over religious minorities.Sectarian tensions flared throughout the BJP’s rise to power, and the flames were often fanned by the party itself. In 2014, Modi supplanted a generation of soft-edged figures and led the party to electoral victory. Although only previous BJP PM, Atal Bihari Vajpayee, had downplayed Hindutva in favor of less divisive center-right policies, Modi has made it the centerpiece of his governing strategy.The first illiberal thrust was launched not against the hardware of democracy (the electoral system) but the software that enables it to operate—that is, an apolitical judiciary, a free press, and other elements of civil society. India’s judicial system has bent to the wishes of politicians since 2014.

Is the form of Hindu nationalism wielded by Modi’s BJP compatible with liberal democratic values? Or are individual rights, minority rights, freedom of speech and freedom of conscience Western ideas in process of being washed away in a saffron tide of Hindu revivalism? If India wants to reclaim its democratic sheen, it will have to grapple with these questions and not just dismiss them with witty wordplay.