“If the navy actually performs its duty and prevents Indian fishermen from entering into Sri Lankan waters, there won’t be any trouble in this regard from fishermen,” Mr Ponnambalam

When the Department of Fisheries with the help of the Sri Lanka Navy dumped some 20 discarded buses off Delft Island sea in Jaffna during the fish breeding ban in June, they hope to achieve two things: one is to create an artificial reef, and other is to discourage Indian bottom trawlers who frequently enter through this route to Sri Lankan territorial waters. 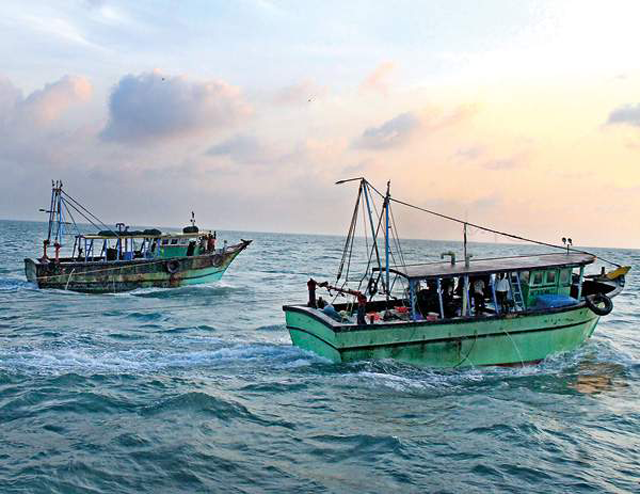 Nearly two months on, Indian fishermen are navigating into Sri Lankan waters. They sail closer to the Northern sea shore for bottom trawling and then damage the nets of local fishermen.

“Indian fishermen are able to navigate [around] the discarded buses dumped on the seabed, after [some] initial accidents. They use satellite coordinates or Global Positioning System (GPS) devices in their trawlers,” Jaffna District Fishermen’s Association Secretary Annalingam Annarasa told the Sunday Times.

The location of the bus barrier is widely shared among Indian fishermen, Annarasa said.

A 45-day annual fishing ban ended on June 14, and hundreds of Indian trawlers are intruding into Sri Lankan waters via Mannar and Kachchathivu islet for bottom trawling, banned in Sri Lanka.

Local fishermen in Munai, Maruthankerny of Point Pedro and Palaly allege that 48 fishing nets, worth Rs 5.37 million had been destroyed by Indian trawlers on Monday.

A complaint has also been filed at the regional Fisheries Department in Jaffna demanding compensation, or livelihood assistance from authorities.

This was raised in Parliament on Thursday when Jaffna District All Ceylon Tamil Congress (ACTC) Parliamentarian Gajendrakumar Ponnambalam, alleged that the navy turned a blind eye to the Indian fishermen.

“If the navy actually performs its duty and prevents Indian fishermen from entering into Sri Lankan waters, there won’t be any trouble in this regard from fishermen,” Mr Ponnambalam said. He also accused the navy of acquiring land belonging to the people of the North to extend the bases, while failing miserably to take action against Indian poachers.

He also asked whether the government is deliberately silent.

Tired of repeated assurances by politicians and government authorities, a group of fishermen representing fisherfolk across the district met the commander northern naval area, Rear Admiral Priyantha Perera last week. The Assistant Director of Fisheries in Jaffna was also present. The meeting was held at Northern Naval Command in Kankesanthurai.

Fishermen at the meeting — that went for over two hours — were not happy with responses from the Northern Navy Commander for their request to take tough action against Indian fishermen.

At one point, fishermen leaders from Point Pedro warned that if the navy failed to take action, it would lead to clashes between fisherfolk of the two countries, suggesting local fishermen would be forced to take the law into their hands to detain Indian fishermen at mid sea.

“The Navy Commander failed to give us any solid undertaking to stop the Indian fishermen in our waters, although we pointed out the hardships we face, particularly after the pandemic,” fishermen leader Annarasa, who was among attendees at the meeting, said.

Ahead of plans to protest in front of the Consulate-General of India in Jaffna, Northern fishermen are to meet the newly-appointed consul-general on August 11.

Days after the meeting with local fishermen leaders, a fisherman from Nagapattinam, Tamil Nadu was reportedly injured in a shooting incident, allegedly by the Sri Lanka Navy at mid sea last Wednesday.

Eight Indian fishermen on that Indian trawler are registered under a politician of the ruling Dravida Munnetra Kazhagam (DMK) party in Tamil Nadu, according to Indian media reports.

Navy Spokesman, Captain Indika De Silva, said navy sailors are advised about standard protocols during patrols. “We don’t shoot at them but chase them away from our waters,” he said.

He also said Indian fishermen who engage in illegal trawling in Sri Lankan waters are not arrested due to coronavirus concerns.

As local fishermen are demanding compensation for the damage caused by Indian bottom trawlers, the Fisheries Ministry is considering auctioning seized Indian trawlers and fishing gear in Sri Lankan custody.

Fisheries Minister Douglas Devananda told the Sunday Times that this week he would go to the sites where seized Indian trawlers are anchored to understand their quality before an auction.

By 2018, at least 174 Indian trawlers had been released by the authorities and an Indian delegation visited Sri Lanka to retrieve the trawlers that were in good condition.