We have to fight the vaccine and our own inner demons simultaneously with the better angels of our nature.

by Ruwantissa Abeyratne in Montreal

It’s Christmas time in the city

Soon it will be Christmas day

A beautiful song heard over the decades, made popular by Bing Crosby et. al, still heralds Christmas amidst the chaos and angst of our times.  There are no more busy sidewalks and people dressed in holiday gear. All that is left of the song is the sound of the snow crunching beneath our feet, releasing to the air above, our own melancholy and desperate discourse with tragedy.  It’s almost as if an unseen enemy has taken control of our body and is now invading our spirit. We distrust each other’s presence not for who we are but for that which our mortal appurtenances will release and cause others physical harm. 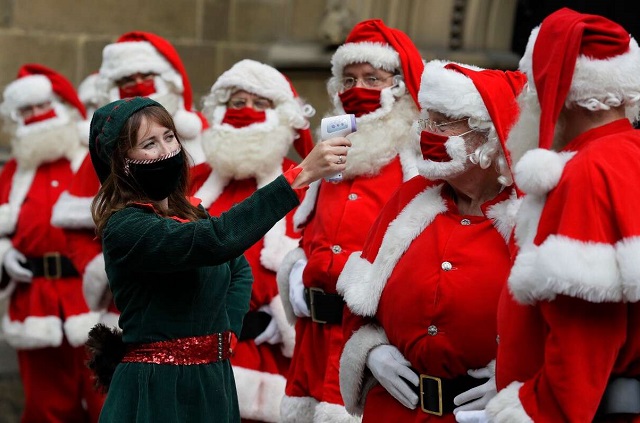 As I walk out, I notice it’s beginning to look a lot like Christmas – as another popular song goes.  The streets and parks are white; the people still courteous and polite in a cautiously suspicious sort of way. I wrap my coat around me in the frigid cold, feeling as though I am desperately trying to restrain an enemy outside, hidden in the wicked wind howling around me.  Every now and then, the wind stops, as if to catch its breath before the next onslaught.

So, this Christmas, I hear over the speakers as I enter the Mall. The décor and glitter of baubles seem lonely in the deserted food court. Most food outlets are shuttered.  Hopefully, all this will pass one day, and we’ll live in fear no more. And then I hear the next song over the speakers: “a ray of hope flickers in the sky; a tiny star lights up way up high; all across the land, dawns a brand new morn; this comes to pass when a child is born”.

Then it dawns on me: amidst all this entropy, children are born around the world bringing joy and hope.  During the “beast” of a tornado a few days ago in Kentucky, which ravaged thousands of buildings and killed a multitude of people, there were reports of babies being delivered in the rubble.

Back home after my sojourn into the bleak outside, I watch BBC world News, where Russia cautions the West, that any attempt at expansion of NATO and Western interests into Russian territory will cause Russia to unleash the most sophisticated weaponry of the world.  The Deputy Foreign Minister warns that it would transcend the Cuban missile crisis of the sixties and reduce humanity into radioactive ashes.

It seems we have bigger fish to fry of our own making. Geopolitics; the “Beast” in Kentucky; Typhoon Rai in the Philippines do not make matters any better.

All that we are left to do is to cling to our audacity of hope:  that the birth of the Prince of Peace will bring the World together in the New Year and from the ashes of a divided world will rise a united humanity with mutual respect and the abhorrence of self-service among nations.   Countries should respect each other in a common fight against the pandemic with mutual respect and cooperation.  This applies particularly in the case of a threat of outbreak of a variant even worse than Omicron in a nation: Emer de Vattel, in his 1758 treatise Droit de gens – The Law of Nations- enunciated this fundamental principle: “A nation then is a mistress of her own actions as long as they do not affect the proper and perfect right of any other nation – – so long as she is only internally bound, and does not lie under any external or perfect obligation. If she makes an ill use of her liberty, she is guilty of a breach of duty, but other nations are bound to acquiesce in her conduct, since they have no right to dictate to her”.

Someone once wondered why in every manger displayed at Christmas there was a light on while the rest of Bethlehem was in pitch darkness. Christmas reminds me of when the three wise men followed a shining star that took them to the new-born. Christmas is the story of light, as is Hanukkah, the Jewish festival of lights, and of giving. The symbolism of Christmas, particularly in its original setting, brings to bear the real significance of the event as a harbinger of peace and happiness and the heralding of understanding and compassion particularly of those in power toward their fellow beings. Christmas is a time for introspection: of self-examination for self-worth. It is a time that all of us should demonstrably show our capacity to shed differences and work toward the common human goal of peace and wellbeing.

We have to fight the vaccine and our own inner demons simultaneously with the better angels of our nature.