Amit Shah was Modi’s ally in the destruction of Kashmir’s autonomy.

“A Question like this cannot be solved unilaterally,” Prime Minister Jawaharlal Nehru categorically declared in the Lok Sabha on Feb 25, 1955. His sharp retort was in response to a member Lakshmi Charan’s now all-too-familiar demand. “In view of the fact that the Kashmir constituent assembly has ratified the accession of the state to India, what will be the terms of discussion on Kashmir with the Pakistani prime minister?”

Shortly before that, on May 15, 1954, after Pakistan had concluded a military aid package with US, Nehru continued to maintain that “India still stands by her international commitments on the Kashmir issue and will implement them at the appropriate time”. 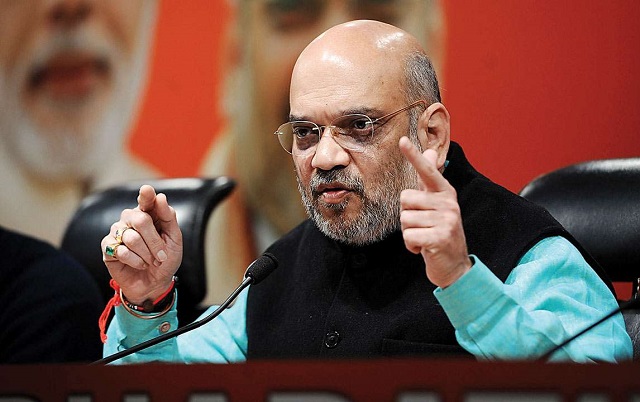 Krishna Menon stated in the UN Security Council on Feb 8, 1957, that “the only international engagements that exist are two resolutions of the UNCIP dated [Aug 13, 1948] and [Jan 5, 1949]. These are the engagements. If they were of a formal character, they might be treaties, but, at any rate, they are the engagements we have entered into.”

Successive governments of India have touted the Shimla Agreement of July 3, 1972, as if it forecloses the Kashmir dispute. Far from it. Its concluding Para 6 envisages negotiations on Kashmir. It says: “Both governments agree that their respective heads will meet again at a mutually convenient time in the future and that, in the meanwhile, the representatives of the two sides will meet to discuss further the modalities and arrangements for the establishment of durable peace and normalisation of relations, including the questions of repatriation of prisoners of war and civilian internees, a final settlement of Jammu and Kashmir and the resumption of diplomatic relations.” The Kashmir dispute is yet to be settled finally.

It bears mention that Kashmiris universally accepted leader Shaikh Muhammad Abdullah criticised both countries India and Pakistan for discussing a solution in the Kashmir dispute behind the back of Kashmir’s representatives. New Delhi has consistently cited the Shimla Accord content that it wipes out the past and renders Kashmir a dead issue.

The actual ground position today was well described by The Economist’s New Delhi correspondent in a hair-raising report in a recent issue. He reported: “Roughly half a million India troops have become a permanent presence. Tens of thousands of Kashmiris have been killed in the process. Millions more are angry about living in what has come to resemble occupied territory.”

This has ever been the Achilles heel — the rejection of the people to which successive governments of India have shut their eyes. The latest in the line is the voluble confidant of Prime Minister Narendra Modi since his Gujarat days, Amit Shah. Modi appointed him the ruling party the BJP’s president by a personal fiat no sooner he became prime minister.

In his second innings as prime minister, Modi made him union home minister. He was an ally in the destruction of Kashmir’s autonomy and even its territorial integrity on Aug 5, 2019.

As The Economist tersely summed up “Narendra Modi, pushed two bills through parliament that cleave the state in two and scrapped what autonomy it still enjoyed. Under the new regime, Kashmir is ruled directly from Delhi, the national capital. The reorganisation promised to replace corrupt politicians, to attract investment and prosperity and to bring lasting peace.

“Two years on, none of these aims has been realised. No new political class has been mustered to represent the Kashmiri people at home or in Delhi; unemployment, at 21 [per cent] is the highest in India; and killings of all kinds rattle Srinagar….”

This did not inhibit Amit Shah when he descended on the Kashmir Valley. On Oct 25, on the conclusion of his tour, he boasted, “Dr Farooq Sahib has suggested that I talk to Pakistan. If I will talk, I will talk only to the people of J&K and its youth, no one else.”

This is the latest in a series of fiats in the last 50 years or so — in effect he is saying that there is nothing about which to talk to Pakistanis ie it is not a party to the Kashmir dispute.

It was a BJP government which set up a backchannel on Kashmir in 1999. In 2001, it was this very government which held summit talks with president Pervez Musharraf at Agra. In 2005-2006, president Musharraf and prime minister Manmohan Singh came within inches of a settlement of Kashmir. Small men on all three sides sabotaged it. Kashmiri separatists misled by Shah Geelani opposed it tooth and nail. Manmohan Singh had to battle within his cabinet and party. And in Pakistan some retired diplomats whipped up opposition.