Seeing is believing. You indeed can not believe that in the wee hours of night like say 3AM you will see thousands of people engaged in festivities in a remote village of Bangladesh. But it really happens and the writer with his entourage is a witness to it. Its in the JorMandap area of Madhabpur union in Kamalgonj upazila which falls under Moulvibazar district of Greater Sylhet in Bangladesh. This area is inhabited by a predominantly Manipuri population. They settled here far away from their Manipur sovereign Kingdom hundreds of years ago but through centuries they have kept their language,culture,religion, food habits and identity intact. They belong to the Vaishnavite ideology of Sanatan Hindu religion having Lord Krishna as their Supreme power through whom they believe to reach eternity. They pray to Sri Krishna as Govindaji, Gopinath and many other forms of the same incarnation of God. The Maha Rass Leela is an annual Sanatan/Hindu religious festival that provides for devotion,prayers and festivities commemorating an event in which Lord Krishna participated with Sri Radha and her mates the Gopikas. It is held on the day of Kaartika Poornima/Raas Poornima(full moon day of the Kartika,the seventh month of Sanatani calender). Before we go deeper into Manipuri Raas Leela as observed by the Bangladeshi Manipuris in Kamalgonj area and elsewhere,lets first get a detailed idea about this festival. 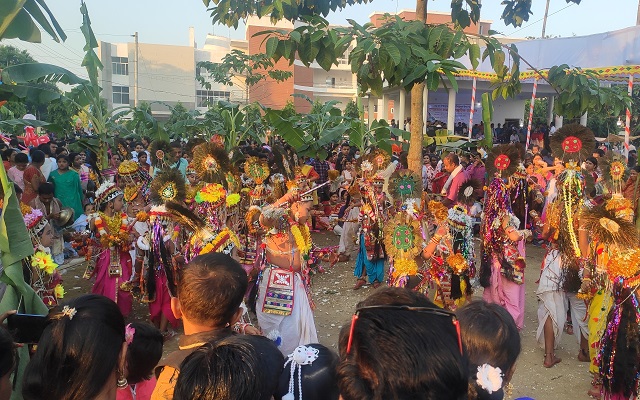 We get reference of Rass Leela in ancient Sanatani scriptures like Padma Purana,Brahmabaibarta Purana, Vishnu Purana, Bhagabat Purana. We get to know that Raas is a festival that is performed at different times of the year and in different modes having different names: Sharad Raas, Basanti Raas, Banga Rass, Shakta Rass,etc. But Maha Raas Leela,as mentioned above is the most celebrated of them all and is more universal. According to Bhagabat Purana Maha Raas Leela was performed by Lord Sri Krishna at his young age of six years only with the Gopikas as her companions,Gopikas being incarnations of Sadhus(holy saints). In Raas Leela Lord Krishna plays on his magical flute and Gopikas are mesmerized by the tune and rushes for the Leela comprising of songs,music and dances. Sri Radhika,the consort of Lord Krishna also joins. Here Rass means Divine pleasure and Leela implies Magic. Maha Rass Leela is a festivity to signify the greatness of Lord Krishna as the prime mover of the Universe. It explains the theoretical philosophy of present day life’s transformation to eternity,sings of day to day life events turning to divinity,explains love in terms of eternal peace of all living forms and emphasizes that Bhakti(respect to divinity) to the Lord sacrificing oneself entirely to Him can beget Him and bring peace. The whole episode of Rass Leela evolves around Love which is meant to be Divine Love and nothing physical.

Amongst other places,the celebrations are most spectacular in Mathura,Vrindaban,Nabadwip,Shantipur, Majuli(Assam),Odisha,Manipur and Bangladesh. The way in which it is performed,varies from place to place. It may be Idol worship, Naam Sankirtan,Leela Kirtan or Raas Leela dance drama. Raas Leela is also known as Brajo Leela as it was performed in Brajodham(currently Vrindaban). It is primarily a Vaishnavite(Vaishnavs worship through spreading the message of Love with music,song and dances) festival but Shakto(worshippers of Shakti or power,eg. Tantriks,Kaali sadhaks) form of ShaktiRaas is also prevalent.

Now we have come close to our event of today’s discussion. Manipuri Raas Nritya is the theme of Manipuri dance:a classical Indian dance form. Apart from Manipuri,other Indian classical dance forms like Kuchipudi,Bharatnatyam,Kathak and Odishi also have strong bias of Raas Leela which is based on Radha-Krishna’s love and leela with Gopinis.

In fact,we may label Manipuri dance as Hindu Vaishnavism theme of love inspired dance drama of Sri Krishna and Radhika. Maha Raas Leela is the greatest religious occassion and festivities related to Raas are very widely celebrated in the Indian State of Manipur(erstwhile Manipur Kingdom and later Princely state) and by Manipuris living in other areas, wherever they live. Though Manipuris historically are of Chinese descendance from Yunnan area and practised Sanamahism,their own religion; they started embracing Hinduism about 500 years ago through preachers from mainland India specially Bengal. Manipur,the then sovereign Kingdom,located in valleys and hills of north eastern Himalayas was not very far from greater Sylhet and Assam. Strong influence of Vaishnavism from these areas encouraged Manipuris to accept this Philosophy. It was Maharaj Bhagyachandra who was a strong believer of Vaishnavite Philosophy who spread his belief amongst his subjects. Having Royal patronage,Vaishnavism had a widespread influence in the Kingdom. By then,Manipuris were great believers of Lord Krishna. Govindaji(Sri Krishna) became the Royal Kuladevta(Deity of the Royal court) and a grand temple of Govindaji was built in Longthabal(a town in Manipur that still exists). In 1799 the temple was consecrated on the Raas day of Kaartiki Poornima with performance of the dance drama of Maha Rass Leela,the idea of which came from the Maharaja himself. And thence it got going. In the Manipuri variant of Raas Leela there are Sutradharis(narrators) who sing and recite holy verses to the tune of Mridangam and Kartaals and the performers(Sri Krishna in the form of a young boy,Sri Radha,Brinda and other Gopikas) dressed up beautifully designed Manipuri dresses execute the Raas Leela to the point of perfection. The tenderness of their postures denote Bhakti. The classical dance form is performed with postures,facial expressions,dancing rhythms and of course the music of the Sutradharis. The dance drama begins exactly at midnight and continues till ushalagna(time of sunrise). It is a combination of Philosophy,Spiritualism, Divinity and Eternity. It shows the way to achieve peace in the eternal abode by doing good and depending on the Lord in this materialistic world. 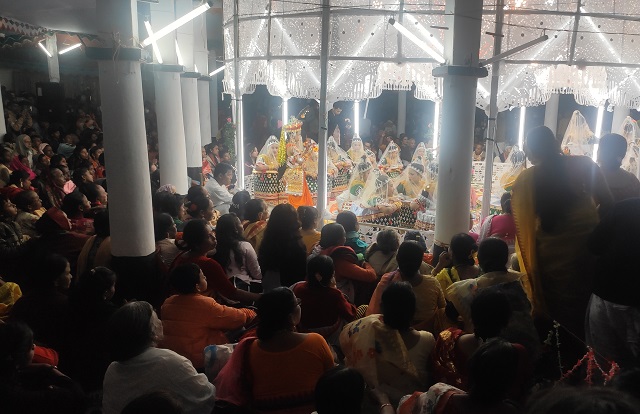 This year,the Raas Poornima was on the 19 November and the Manipuri Maha Raas Leela Seva Sangha had chalked out a neat programme to observe the festivities with due fervour for the 179th time,the venue being Shivbazar  JorMandap of Madhavpur in Kamalgonj. Recieving an invitation from some Manipuri friends,I decided to travel to the venue to enjoy the Festival and the mela(village fair) associated with it. I have been to this place on a couple of occassions in earlier years too. Still,I decided to take a break from last 20 months morbid seclusion from the whole world due to Covid pandemic restrictions. Anjana was with me as usual. Another couple,Sharmistha(our younger sister) and Nikhil were welcome inclusions in the troupe. Elaborate travel arrangements from Chattogram to Sreemangal(our halt for two days and nights)and back was planned. That included visit to Lawachhara National Park and Tea Gardens of Sreemangal too. One full day including the early hours of the next was devoted for the Raas. The mela starts in the morning and it was huge this time. When we reached the venue near the JorMandap,a place known to me from before,it was a pleasant sight to find an almost completed enormous structure,built by the present Government to house the Manipuri Lalitkola(Fine Arts) Academy. This has been built for encouraging and enriching the already rich Manipuri culture,research facilities included. It was mid afternoon and the first part of the programme,the Gostha Leela,in which young boys enact Sri Krishna and his friends enjoying their life tending to cow herds and playfully dancing. This went on upto the sunset. Meantime,an official inaugural session was also going on simultaneously. This session featured lectures on the Rass Leela,the rich past performance of the Kamalgonj Manipuris,religious harmony in the area and the country,religious songs like Kirtan and formal speeches by dignitaries,the Chief Guest being the Planning Minister Mr Abdul Mannan MP. The Honourable Minister assured all support from the Government to the local Festivities and also to all minorities of the country. He condemned the recent communal disturbances in certain places of the country in strong words. His pledges were comforting and reassuring. By that time the mela premises

( on the Vanugachh-Madhavpur Road) and sorrounding areas became a sea of people. Eateries,Manipuri dresses and sarees,book stalls,daily necessities,handicrafts,you name it and there were stalls selling that item. I was told the mela continued upto Saturday noon time and an estimated 150 thousand attended the mela. Many of them enjoyed the dances of Raas Leela. Many others came just to enjoy the mela. For Manipuri population of Bangladesh it is also a time for social congregation. Manipuris from far and near converge in Kamalgonj during this period. Many enthusiasts belonging to other religion but interested in this grand event also made it convenient to be there. It was a scene to enjoy. Maintenance of health protocols could be at a higher and better level. But recent downward trend in Covid situation has emboldened people,it seemed. We stayed there till the end of Gostha Leela and retired for the rest of the evening to our Tea Estate retreat for some rest and dinner. After dinner we had some relaxation with tea,leaves being from the garden’s factory. You don’t usually get a chance of drinking such fresh tea. We could grab a little nap and rushed back to the event venue Jormandap. There were three pandals decorated side by side for the same performance. We guess that it is arranged to accommodate more artists,so that all enthusiastic youth could get exposure to their culture and enjoy performing in the festivities. About the dance drama itself,enough has been discussed earlier. Just at midnight the artists were on the floor. In the beginning,the consorts of Sri Radha started with Abahan(welcoming) with their postures accompanied by the music of Sutradharis. After about an hour appeared the young Sri Krishna and slowly the dance drama unfolded. All the three pandals were full of spectators. It was difficult to accommodate all those who desired.The performances were mesmerising,to say the least. The whole drama continued till the breaking of daylight. While we were departing,we were surprised to see the mela going on in full swing. Only heads could be seen all around. Later,I gathered that till late morning people were still arriving at the mela site and by the time curtains were drawn,it was well past mid day. The experience gathered is unforgettable.

Pradip Kumar Dutta is a Masters in Engineering. He takes interest in History, Travelling, Nature, progressive ideologies. He is a regular contributor to Bangladesh Dailies.