The handsome, youthful, cigar-smoking, beret-clad looking revolutionary has become an icon of protest the world over since long.

“For us there is no valid definition of socialism

other than the abolition of the exploitation of

one human being by another.” – Ernesto Che Guevara

The 9th October 2021 would be the 54th Death Anniversary of Ernesto Che Guevara.

Che’s friend Ricardo Rojo wrote a far-famed book on him titled, “My friend Che.” Tears welled up my eyes every time whenever I read it. To me, Che is more than my friend, and more than my soulfulness kinsman. Acclaimed around the world, he is the dashing rebel whose epic dream was to end poverty and injustice in Latin America and in the developing world through armed revolution. One can trace Che’s extraordinary life, from his comfortable Argentine upbringing to the battlefields of the Cuban revolution, from the halls of power in Castro’s government to his failed campaign in the Congo and assassination in the Bolivian Jungle… 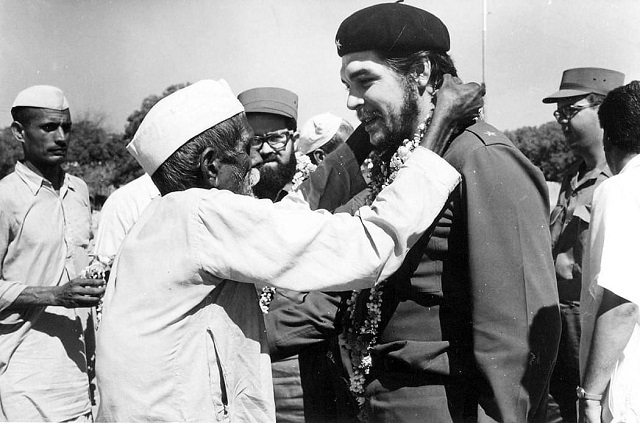 He was the Argentine Marxist and a guerrilla fighter whose famous portrait by Alberto Korda still adorns everything from T-shirts and Baseball Caps to Hagiographic murals, MAD magazine covers high-end panties. He was brutally killed 54 years ago, on 9th October 1967. He had been captured with the help of disdainful CIA operatives of USA in Bolivia, where he was attempting to spark a continent-wide revolution in the mold of the Cuban rebellion of the previous decade. Che Guevara illuminates as the mythic figure that embodied the high-water mark of revolutionary communism to establish people’s proletariats throughout the world as a force in history.

In his journal, Guevara writes of the encounter with the forces of Batista government, “I talked all night with Fide Castrol. And in the morning I had become the doctor of his new expedition. To tell the truth, after my experiences across Latin America, I didn’t need much more to enlist for a revolution against a tyrant. But I was particularly impressed with Fidel, I shared his optimism. We needed to act, to struggle, to materialise our beliefs. Stop whining and fight.”

The handsome, youthful, cigar-smoking, beret-clad looking revolutionary has become an icon of protest the world over since long. By the late 1950s, Ernesto Che Guevara began appearing in newsreels, and within less than a year after his death the legendary freedom fighter was spawning cinematic works, depicted by famous actors in fiction films. Many books are written by many writers on this great revolutionary. He has inspired numerous documentaries and features. To remember and honour this indefatigable champion of the wretched of the Earth, there are the top ten films about him —fallen, but not forgotten.

If, as Mao Tse Tsung puts it, “the people are the sea and the guerrillas are the fish,” Che’s lack of local support doomed his final struggle. A fish out of water, Guevara was caught on October 8, 1967, by the US trained and armed Bolivian military, with CIA participation. He was summarily executed the following day, thus avoiding a sensational trial and bringing to a devastating end Che’s tri-continental strategy. According to 3 June 1975 declassified document of America, “When Che Guevara was executed… one disdainful CIA (the whole CIA is a disdainful outfit) official was present — a Cuban-American operative named Félix Rodríguez… After the execution, Rodríguez took Che’s Rolex watch, often proudly showing it to reporters…” So much inhuman an act!

Che Guevara wrote that we must be “guided by a great feeling of love” for the oppressed, and “strive every day so that this love of living humanity is transformed into actual deeds, into acts that serve as examples, as a moving force”. Nelson Mandela correctly had spelt out, “Che’s life is an inspiration for every human being who loves freedom. We will always honor his memory.”

The book “My Friend Che” by Ricardo Rojo was first published in 1968 and translated in 11 languages was the first direct testimony written on Ernesto Guevara. The book sold more than half a million copies, own facets of the guerilla leader and helps discover the man before he was converted in a myth. Ricardo Rojo was a rare species on the Argentine political landscape: he put principles before power and profit, and thus fell out with all those he started off supporting. But Rojo will be commemorated for his best-known book, “My Friend Che.”

As a young medical student, Guevara travelled throughout South America and was radicalised by the poverty, hunger and disease he witnessed. His burgeoning desire to help overturn what he saw as the capitalist exploitation of Latin America by the United States prompted his involvement in Guatemala’s social reforms under President Jacobo Árbenz, whose eventual CIA-assisted overthrow at the behest of the United Fruit Company solidified Guevara’s political ideology. Later in Mexico City, Guevara met Raúl Castro and Fidel Castro, joined their 26 July Movement and sailed to Cuba aboard the yacht Granma with the intention of overthrowing US backed Cuban dictator Fulgencio Batista.

Guevara soon rose to prominence among the insurgents, was promoted to second-in-command and played a pivotal role in the victorious two-year guerrilla campaign that deposed the Batista regime. The United States supplied Batista with planes, ships and tanks, but the advantage of using the latest technology such as napalm failed to win them victory against the guerrillas of Fidel and Che.

Following the Cuban Revolution, Guevara performed a number of key roles in the new government under his friend Fidel Casto. Additionally, Guevara was a prolific writer and diarist, composing a seminal manual on guerrilla warfare, along with a best-selling memoir about his youthful continental motorcycle journey. His experiences and studying of Marxism–Leninism led him to posit that the Third World’s underdevelopment and dependence was an intrinsic result of imperialism, neocolonialism and monopoly capitalism, with the only remedy being proletarian internationalism and world revolution. Guevara left Cuba in 1965 to foment revolution abroad, first unsuccessfully in Congo-Kinshasa and later in Bolivia.

Guevara remains a revered historical figure. As a result of his perceived martyrdom, poetic invocations for class struggle and desire to create the consciousness of a new man driven by moral rather than material incentives, he has evolved into a quintessential icon of various leftist movements. Time magazine named him one of the 100 most influential people of the 20th century, while an Alberto Korda’s photograph of him, titled Guerrillero Heroico, was cited by the Maryland Institute College of Art as “the most famous photograph in the world”.

The day after his execution on October 10, 1967, Guevara’s corpse was displayed to the world press in the laundry house of the Vallegrande hospital. Cruelty should have its limit!

Guevara received several honours of state during his life, such as, 1960: Knight Grand Cross in the Order of the White Lion, 1961: Knight Grand Cross in the Order of the Southern Cross… His life and legacy will remain alive till this civilisation is having life, vigour or spirit.  He will remain a transcendent figure both in specifically political contexts and as a wide-ranging popular icon of youthful rebellion. A revolutionary leader, Ernesto Guevara de la Serna was born on June 14, 1928, in Rosario, Argentina. After completing his medical studies at the University of Buenos Aires, Guevara became politically active first in his native Argentina and then in neighbouring Bolivia and Guatemala.

In 1954, he met Cuban revolutionary Fidel Castro and his brother Raul while in Mexico. But one thing is very clear that he was a prominent communist figure in the Cuban Revolution (1956–59) who went on to become a guerrilla leader in South America. Executed by the Bolivian army in 1967, he has since been regarded as a martyred hero by generations of leftists worldwide. Guevara’s image remains a prevalent icon of leftist idealism and anti-imperialism.

Since his death, Guevara has become a legendary political figure. His name is often equated with rebellion, revolution, and socialism. His life continues to be a subject of great public interest and has still been explored and portrayed in numerous books and films. His famous quote reads, “Better to die standing than to live on your knees.”

As Guevara’s interest in Marxism grew, he decided to abandon medicine, believing that only revolution could bring justice to the people of South America. In 1953, he travelled to Guatemala, where he witnessed the CIA-backed overthrow of its leftist government, which only served to deepen his convictions.

In his book, ‘Man and Socialism’ in Cuba, Che wrote, “Man truly achieves his full human condition when he produces without being compelled by the physical necessity of selling himself as a commodity.”

Today, with deep-chested, I remember Che Guevara, the revolutionary hero of the world’s proletariats.