The fear is not for the immediate, but a shortage of turkeys and “pigs in blankets” among others over Christmas. This is perhaps, considered intolerable and “far from being English”.

Half stocked supermarket shelves today, closed petrol pumps and not forecourts, are a common sight in London and the South East. Some say this is due to a crippling shortage of Heavy Duty Vehicle (HDV) drivers after Brexit, and changed career patterns, as well as few Driving Test Centres open for heavy goods vehicles tests in UK during the pandemic. Besides, drivers from European Union were barred from UK, as they were classed “unskilled”. 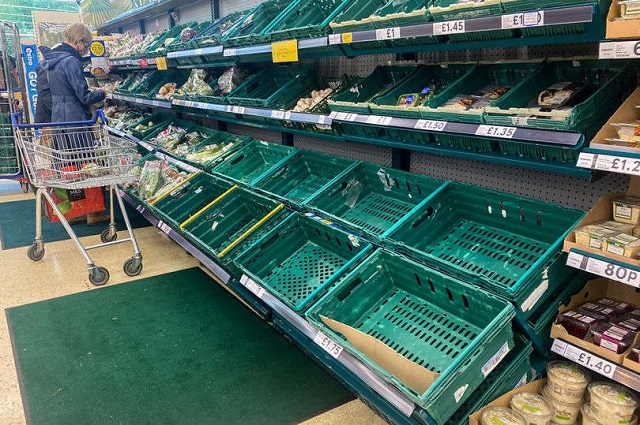 Now in an about turn as Brits grapple with the petrol crisis, the Government of Britain is offering every inducement possible; short term visas to 5000 EU lorry drivers, as well as getting the military services to provide petrol bowser drivers from 4 October 2021, as petrol queues are mapped out in great detail.

The fear is not for the immediate, but a shortage of turkeys and “pigs in blankets” among others over Christmas. This is perhaps, considered intolerable and “far from being English”.

Whilst all this is happening, Bradford based, Morrison’s 497 supermarket chain (4th largest in Britain) was sold by auction on orders of the Takeover Panel to the highest bidder, a US Investment Group (CD&R). England has always been vied in the Takeover trade as it is a very profitable business centre for US investors, not only for asset stripping.

Inside Boris Johnson is a plan “to get a grip and move on,” end the fuel crisis, level up the North of England “Red Wall” constituencies that he won over from Labour, in his 80 odd seat commanding majority in December 2019 and perhaps, retire to write his memoirs. But only time will tell whether Brexit, the Pandemic and “Panic Buying” bite at the supply chain?

Unlike others before him, he cannot sit still. Visas will be granted up to 300 drivers immediately, permission to stay in the UK until at least till the end of March 2022. A further 700 drivers will arrive by the end of October for a short spell until February 2022. Besides,

Hauliers in UK will be made to track down prospective drivers and give them jobs working alongside 280 Army recruits. All this and more known as “Energy, Food and Fuel crisis,” will be thrashed out at the Tory Party Conference in Manchester and will be the theme for Boris over the next few months, at least until Christmas.

We are told that “levelling up” of Britain, “taking a Grip of the situation” and keeping Corona virus under control during the winter, will be Boris’ paramount concern to help celebrate Christmas after nearly two years of hard grind in the economy.

But the definition of Identity Politics is much more. It is a tendency for a people of a particular religion, race, social background and culture, to form exclusive political alliances, moving away from the traditional broad based party politics.

This is neither new either in UK or even Sri Lanka as it refers to a feature of politics in which groups of people with particular shared racial, religious, ethnic or social and cultural identity, seek either outwardly or inwardly to promote their own specific values, concerns and interests.

The aim of Identity Politics is to secure political freedom of a specific group of people who have been marginalised within its larger context.

In the UK, imagine the idea of levelling up. You would note that over time the “Red Wall” of Labour held constituencies in the North of England voted Conservative, partly because they were not to be called the “Working Class” and wanted a share of the so called “freedoms” – the standard of living – that London had, but not necessarily to match the South of England, but at least start to enjoy the same wages as paid in London, perhaps, the same social facilities that the capital of UK, London has enjoyed over centuries.

The dramatic rise of Identity Politics is regardless, as both a cause and an effect of the rise of “Popularism”.

According to “The Guardian” in UK: “when groups feel threatened they retreat into tribalism, causing groups of people to become more defensive, “more us versus them”.

This is an ideology that has been in much of Conservative Party thinking over some time.

Because everything relates to identity of who people really are, whether they want to be liberated from being called “the working class, or the Work Horse,” the time had come to be free as a Conservative and vote Conservative. This is the new era that is taking root and promised by the Government of Boris Johnson.

The Coronavirus pandemic has further accelerated this change, as more and more people all over Britain want the freedom to work a number of days from home rather than permanently in a “working environment” called “The Office”.

The hope is that People and Governments will no longer be in a bind, or attempt to think “only binary,” but will have the freedom of choice, which has been lacking over many fields of human endeavour