The fishing equipment that is prohibited in Sri Lanka must be banned by India in Palk Bay.

During Narendra Modi’s first term as prime minister, he requested his colleague from Tamil Nadu—Pon Radhakrishnan—to find a solution to the travails of the Indian and Sri Lankan fishermen in the Palk Bay region. Radhakrishnan invited a large group of Tamil Nadu fishermen to New Delhi to meet the concerned officials. Familiar with my work on the subject, Radhakrishnan asked me to assist him in the complicated task. A meeting was held in the auditorium of the BJP headquarters, where 19 representatives spoke about their problems—ceding of Katchatheevu, giving away of traditional fishing rights in and around the island, and  shooting and killing of Indian fishermen by the Sri Lankan Navy. I was asked to intervene. I complimented the fishermen for their narration of events. Then I added: “None of you spoke about the most important problem that we face today. Have the Sri Lankan Tamil fishermen got the right to fish in their own waters?” There was pin-drop silence. The fishermen, then and now, do not want to face this grim reality.  The meeting ended in failure. 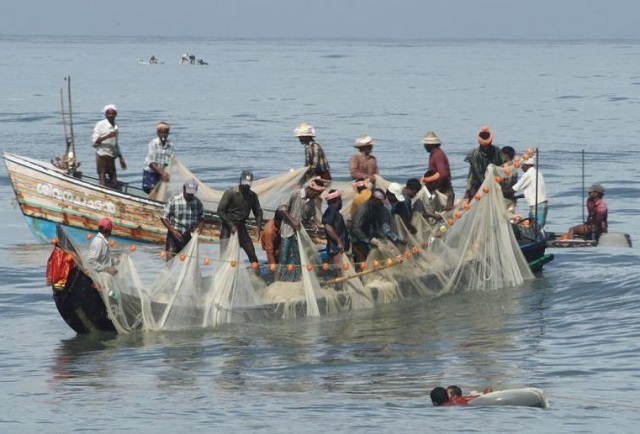 Today, another minister from Tamil Nadu, Dr Loganathan Murugan is Minister of State for Fisheries and Animal Husbandry in the Central government. An expert in constitutional and international law, Murugan is familiar with the complexities. The Tamil Nadu fishermen go deep into Sri Lankan waters. They use bottom trawling, which does incalculable harm to marine ecology; and what is more, it is banned in Sri Lanka. On the three days the Indian fishermen go into Sri Lankan waters, the fishermen from the island nation do not come out for fishing, because their nets would be destroyed by their Indian counterparts. The waters are muddied and on the next day the Sri Lankan fishermen find it difficult to fish. If the Sri Lankan government approaches the International Court of Justice, as the Philippines did against China in the South China Sea, India’s image in the comity of nations would take a nosedive.

The need of the hour is for Murugan to take firm decisions and strong actions. The fishing equipment that is prohibited in Sri Lanka must be banned by India in the Palk Bay. Fishing practices that do irreparable damage to marine ecology must be given up. Murugan’s primary task is to mobilise the support of the Tamil Nadu government and make the state’s fishermen see the writing on the wall. The bonds of ethnicity, language, and religion helped fishermen lead lives of harmonious coexistence for several centuries. And, what is more, fishing is an extremely important source of income for the people of Northern Province in Sri Lanka. According to the scholar Ahilan Kadirgamar, the Northern Province contributed over a third of fish catch to the island country. Fish production dropped drastically during the prolonged ethnic conflict. The ban on fishing on the Sri Lankan side of the Palk Bay, the movement of Sri Lankan fishermen to India as refugees, their working with the Indian trawler owners, and shooting and killing of Indian fishermen by the Sri Lankan Navy for their alleged involvement with the Tigers brought considerable strains in the bilateral relations.

With the end of the war in 2009, the Sri Lankan Tamil fishermen wanted to resume fishing, but indiscriminate poaching by Indian fishermen and their dangerous practices continue to be the main obstacles. Trawlers have been referred to as the “hoovers of the shelf bottom” and “bulldozers mowing down fish and other benthic species”. Within a few years of their introduction, the Indian side of Palk Bay was devoid of fish; and the fishermen, for their livelihood, began to enter Sri Lankan waters. Prof. Oscar Amarasinghe of the University of Ruhuna has pointed out that the Indian trawlers could even be seen in the northeastern part of the island. The most important hurdle in finding a solution is the trust deficit. The organisations involved on the Sri Lankan side—government, Navy and, above all, the fishermen are of the view that the Tamil Nadu fishermen are not sincere. During the Norway-backed ceasefire period, the Alliance for Release of Innocent Fishermen (ARIF), led by Dr Vivekanandan, arranged a dialogue among fishermen of both the countries. For the first time, in 2004, the Indian side accepted the reality that bottom trawling must be discontinued. Seventeen years have passed and bottom trawling still continues. The second window of opportunity was provided in 2005, when in the Joint Working Group meeting, Sri Lanka, for the first time, agreed to consider proposals for licensed fishing in its waters. The government of Tamil Nadu should have welcomed it and submitted detailed proposals. The two Dravidian parties were, however, more interested in blaming one another than in finding a solution.

The ball is in India’s court. The government of India must take the initiative and immediately announce that the use of bottom trawlers would be stopped from the new year 2022. The damage to the Indian fishermen could be ameliorated if the announcement is followed by two steps. First, the trawlers can be used in the Odisha coast where waters are very deep. The government of Odisha could be approached for buying the trawlers. Second, New Delhi is very keen to develop deep sea fishing. Hence, the trawlers could, with certain modifications, be used as smaller fishing vessels that cater to the mothership. Fishermen are migratory and the Tamil Nadu fishermen could be persuaded to take to deep sea fishing. The success of diplomacy is to convert a crisis into an opportunity. If New Delhi is determined, it can create a win-win situation in the Palk Bay. If the trawlers are decommissioned, a congenial atmosphere could be created. India can transform the Palk Bay from a contested territory to a common heritage. The first step is to recognise that there are various stakeholders—two Union and provincial governments, the Navies and Coast Guards, fisheries departments and above all, fishing communities of the two countries. The next step should be to form a Palk Bay Authority (PBA) consisting of marine ecologists, fisheries experts, strategic specialists and government representatives. The PBA could determine the ideal sustainable catch, type of fishing equipment that can be used, and the number of fishing dates for Sri Lankan and Indian fishermen. The focus should be on enrichment of marine resources and improvement of the livelihoods of fishermen.

Highlighting the importance of good neighbourhood policy, former Prime Minister Manmohan Singh pointed out, a few years ago, that while he cannot alter the existing borders he can try to make the borders irrelevant. This rare moment of opportunity is too valuable to be missed.