On May 25th, as part of the Geneva Lecture Series concepted and conducted by prof. Anis H. Bajrektarevic, a large number of international affairs specialists, faculty fellows, practitioners and diplomats gathered for a special session devoted to Democracy and Human Rights. The lecture given by H.E. Kjell Magne Bondevik, was the highlight of this mesmerizing and content intensive event. Excellency Bondevik served his native country of Norway as Deputy Prime Minister and Minister of Foreign Affairs in 1990s, but also as its longest-serving non-Labour party Prime Minister (1997-2000 and 2001-2005). He was a founder and the first president of the well-known Oslo Center for Peace and Human Rights (2006-on). 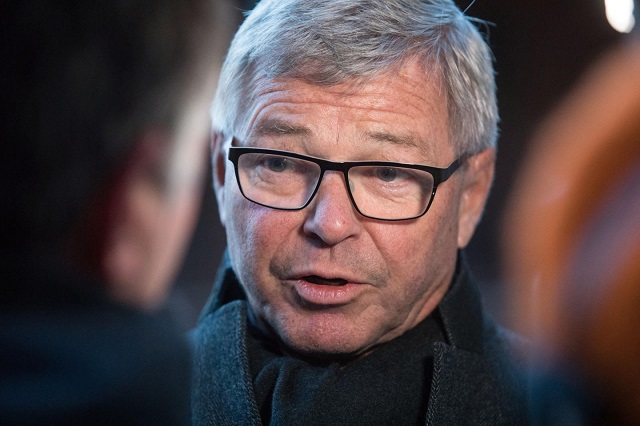 Opening the day, the Swiss University Rector reminded the audience that “modern day democracy and (respect for) human rights do not have any alternative, since they represent the highest achievement of the human civilisation.”

Opening his talk, H.E. Kjell Magne Bondevik gave a comprehensive analysis of the role that human rights and democracy’s role plays on maintaining peace and stability worldwide. He tackled issues, including recent events, such as Covid and the decrease of democracies, human rights and the many dilemmas which surround them; including the double standards, the relationship between democracy and human dignity, and what the Oslo Center is contributing to this issue.

Excellency Bondevik continued his lecture by stating that, in general, over the past 30 years democracies have been on the rise, but as of recently they have seen a rapid decrease which can be interpreted as a direct threat to peace and stability. This is because as according to him, lasting peace depends on real democracy and human rights as well as inclusive societies.

With this in mind, His Excellency presented two dimensions which are the key in preserving democracy, peace, and stability in future:

2) create more inclusive societies were different groups are included and the civil society is strengthened”.

Then, the Former Prime Minister, addressed human rights and the many dilemmas surrounding them and the disconnect in the international discourse. First, His Excellency stated that abuse of human rights, authoritarian and totalitarian regimes, and encroachments of human dignity will consequently lead to uprise and violent conflicts as can be seen in history. Hence, there are 2 dilemmas: 1) the disconnect between human rights as international discourse, and 2) political practices. Moreover, His Excellency specified that the disconnect has 2 further facets: 1) the discourse of the UN, western governments, and academics, as opposed to the experienced reality; 2) which can be seen in regimes that are good at rehearsing their human rights discourse, which is used as a smokescreen for systematic violations. Therefore, “we have to move on from the historical ties of human rights and place them in a contemporary political and human experience context and become much more worried about their universality”.

Furthermore, His Excellency stated that, “human rights are seen to be only relevant and feasible in mature democracies where power holders can be held accountable, otherwise, they may only be seen as theoretical construct and theme for International conferences”. Therefore, the lack of correspondence between discourse and practices that is present nowadays is what has led to a moral and credibility crisis for international human rights. To solve this, His Excellency affirmed that a step in the right direction would be the improvement of effective assessment and credible tools for human rights and the prosecution of their violations and violators.

In Addition, H.E. Bondevik addressed the growing issue of double standards between various nations concerning human rights. In this regard, His Excellency affirmed that the US and Europe have lost credibility as protectors of human rights, “because the standards used to measure them in one country must be the same used in another, even if one is a ally and the other an enemy”. Hence, this constitutes another discontinuity that threatens the universality of human rights, since all states should guarantee freedom to allow societies to change and improve internally. Moreover, His Excellency stated that he believes in human rights but that “it’s also important to address the social and political realities that undermine their universality and critically assess our own discourse, we must relentlessly breach the gap”.

Furthermore, H.E. Bondevik tackled democracy more in-depth and stated that “it is the consequence of the fundamental value that is human dignity”. His Excellency elaborated on the previous statement and described fragile states and weak democracies as having internal conflicts characterized by political, ethnic, and religious divides as well as frail state policy. Moreover, weak states have coalition governments which are the result of political compromises which lack a common political platform, and so, they often have short histories of political cooperation and democratic governance. Thus, “it is extremely important to promote cooperation because it may serve as a pre-condition or successful post-conflict reconciliation”.

Lastly, H.E. Bondevik, as Founder and Executive Chair of the Oslo Center, addressed what the organization can contribute in regard to democracy and human rights as basis for lasting peace. He affirmed that the focus of the organization will be to “provide context-sensitive advice to political leaders, parties, and different government apparatus on power-sharing, coalition building, and enhancement of dialogue and cooperation”. Notwithstanding, it will continue to lead projects in countries such as Kenya, Somalia, Uganda, North Macedonia, and Georgia to create development mechanisms. However, more importantly, the Oslo Center will continue to align its work in the form of partnerships with the main political institutions of each country as these are the individuals actually on the ground and the key to (change and) success.

The former Prime Minister of Norway, His Excellency Kjell Magne Bondevik, confirmed the earlier statement of his host prof. Anis H. Bajrektarevic that “confrontation is what you get, and cooperation is what you are fighting for”, by concluding his lecture with following words: “Democracy is about how to share power and respecting the will of the people, it is a continuous and ongoing process about political and public dialogue – and dialogue is the only tool to build better relations between communities and regions. Therefore, respect for democracy and human rights is a conflict prevention and peace tool”.

About the author: Madrid-based junior researcher specialized in law and international relations. Covers International Institute IFIMES before the UNWTO and other Iberia-based international organizations.