Omicron variant known as B1.1, 529 was first detected in Southern Africa only some days ago, where vaccination rates are low.

I have spent the better part of the day with my search of Omicron, it seems that everything I read and everything people, scientists, Governments say to clear up the confusion, only confuses matters more.

Although I don’t entirely feel at one with all the ideas floating around, chances are at least one thing is becoming clear, no one has died of Omicron. I am sure my readers will say that it is too early to say that Omicron is not as dangerous as Delta, Alpha or the other known variants around the world.

Given that the Omicron variant has been detected at a faster rate than previous surges in infection, it does suggest that it has a growth advantage. However, there are some encouraging early signs about Omicron, despite the ghastly spike protein.

We are told Omicron like the Alpha variant has a specific mutation in part of the “S gene” which makes it easier for PCR tests to identify whether a patient has the variant, thus easier to track. I think South African epidemiologists should be praised for the speed with which they shared the “discovery” of Omicron with the world.

Omicron variant known as B1.1, 529 was first detected in Southern Africa only some days ago, where vaccination rates are low. Wealthy nations have in some way failed to share the “vaaci nation” as it were a nation’s reserve currency, without sharing it adequately to boost world vaccination rates, while extending their vaccination programme to children and giving booster roll out to anyone in their own nation to the over forty years old. Each nation, although joined together as members of the World Health Organisation (WHO) acted more or less unilaterally. There was a lot of talk about herd immunity, but little if anything was done, to expect “another variant of the unvaccinated”.

Omicron is our Christmas gift?

Today, Omicron is news, more than it creates panic stations, still more, as we approach some two years since first reports of COVID-19 pandemic arrived.We are geared in our minds to accept the worst, and as if what affects one part of the world does not affect others. Since Covid-19 we have become “Islanders”. 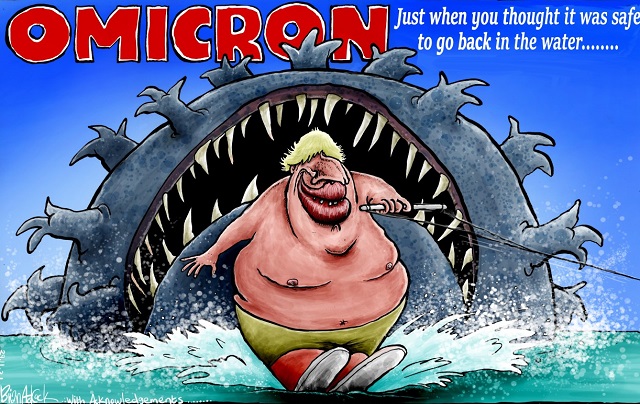 The research in Italy over the weekend has produced the first image of the new strain showing it has 50 mutations, double the number of the Delta variant, which is the current dominant variant.

What is worrying some scientists is “30 of these mutations are of the “spike protein” and half of those are in the receptor binding domain– the parts that binds to the ACE 2 receptor on human cells through which the virus enters tissues.” What is revealed is not of much knowledge either to me or any layman.

What we as laypersons know, came during this morning (29 November 2021) Press interview by First Minister, Nicola Sturgeon of Scotland, who stated “Existing vaccines may be less effective, but are still effective against Omicron”. But Scientists maintain we will only prevent variants of COVID-19 from emerging in future, if we are able to protect all of the world’s population, not just the wealthy parts, presumably to create “herd immunity”. What a “Mission Accomplished.”

But, once again “increasing numbers” but hopefully not in the hundreds or thousands, of Omicron cases are being tracked and traced across Europe, three in Scotland and twoin England. This afternoon an announcement was made that the first two cases of Omicron identified on 27 November 2021 in Nottingham and Brentwood, Essex, on the outskirts of London, are well. We are yet to know whether they are “fit and well”?

Thankfully we are informed that the school child who was infected with Omicron at Lockwood Primary School, Brentwood, is isolating with family. Dr. Michael Gogarty, a researcher said; “When I say the two cases in England are well, I mean they are not seriously ill. They have shown symptoms, but they do not require hospitalisation”. Hospitalisation is the yardstick for wellbeing !

Why I bring out the seriousness of Omicron?

My readers will note that there are more than 10 million confirmed cases of COVID-19 in UK, no comparison at any stretch of imagination, to the confirmed cases in Sri Lanka. Of course, we can only compare like with like, in relation to our size and our population. Near

UK Government on the recommendation of the Joint Committee on Vaccination and Immunisation is set to extend the vaccination roll out to all adults over 18 years, with the gap between two doses cut to 3 months. PCR Tests and Self Isolation have been brought back for travellers arriving in UK from “Red List Countries” as of 30 November 2021.The Government on the advice of Mental Health authorities do not want to close schools and keep children at home before the Christmas break. Education is not to be affected as expected, but strict guidelines are in progress with compulsory face masks, near social distancing in class rooms, among others, until reassessment. Work from home is soon expected.

The Cost of Omicron

UK Government is aware of the very heavy price both economically and socially in terms of the Omicron and Non-Omicron variant health outcomes, especially its impact on Mental Health, Christmas turkey nearby, and general wellbeing.

It is nowhere near making the knee jerk reactions after COVID-19, a year and a half ago. It is only adopting a “minimalist approach” for the time being with mandatory wear of face masks and rigorous fines imposed, but is expecting the public to act seriously in taking  ”personal precautions”. We in England, during Christmastime, the game called it “passing the parcel”.  It appears, it has learned lessons from the past, but is very cautious this time that its 80 seat majority is not upset by either not taking Omicron as seriously as it deserves, or upsetting the jittery vocal minority of Tory MP’s opposing curbs, either on libertarian grounds, or out of concerns over economic harm with another Lockdown.

Prime Minister Boris Johnson is in between a rock and a hard place, as the Labour Opposition has today reshuffled its Opposition Cabinet to hold the Government to account.

“Volley to the Right, Volley to the Left, thunder and lightning and “Omicron and Macron,”  sandwichedin the middle. I guess, he has planned to handle Omicron, as much as his mop hairstyle? Can Boris take it, “Yes, he Can”?