Police have arrested 13 suspects and detained dozens of others over the lynching of a Sri Lankan employee at a sports equipment factory in eastern Pakistan, officials said.

A mob of hundreds of enraged Muslims descended on the factory in the district of Sialkot in Punjab province on Friday after the Sri Lankan manager was accused of blasphemy. 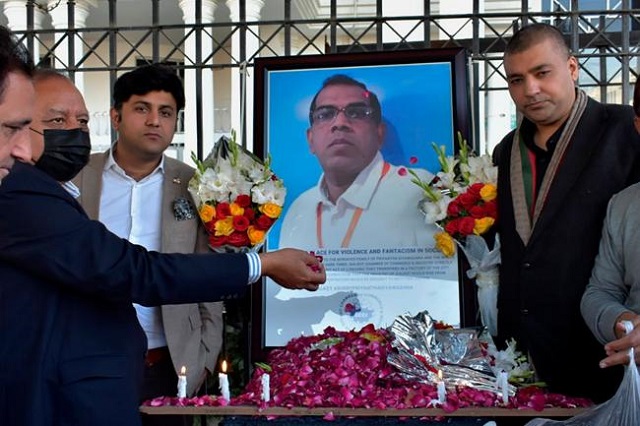 The mob grabbed Priyantha Kumara, lynched him and publicly burned the body, according to police. Factory workers accused him of desecrating posters bearing the name of Islam’s Prophet Muhammad.

Punjab police chief Rao Sardar said on Saturday that investigators arrested prominent suspects after seeing video showing their role in inciting workers to violence, killing the manager and dragging his body outside, and taking selfies with his burning body and proudly admitting what they did.

Mr Sardar, in his initial report to authorities, said the victim had asked the workers to remove all stickers from factory machines before a foreign delegation arrived.

It said the incident started at around 11am on Friday and three constables reached the factory to control the situation shortly after.

The lynching was widely condemned by Pakistan’s military and political leadership, prominent social and religious figures and civil society members.

In the conservative society of Pakistan mere allegations of blasphemy can provoke mob attacks. The country’s blasphemy law carries the death penalty for anyone found guilty.

Friday’s attack came less than a week after a Muslim mob burned a police station and four police posts in north-western Pakistan after officers refused to hand over a mentally unstable man accused of desecrating Islam’s holy book, the Koran. No officers were hurt in the attack in Khyber Pakhtunkhwa province.

Pakistan’s government has long been under pressure to change the country’s blasphemy laws, which Islamists strongly resist. ( Agencies)