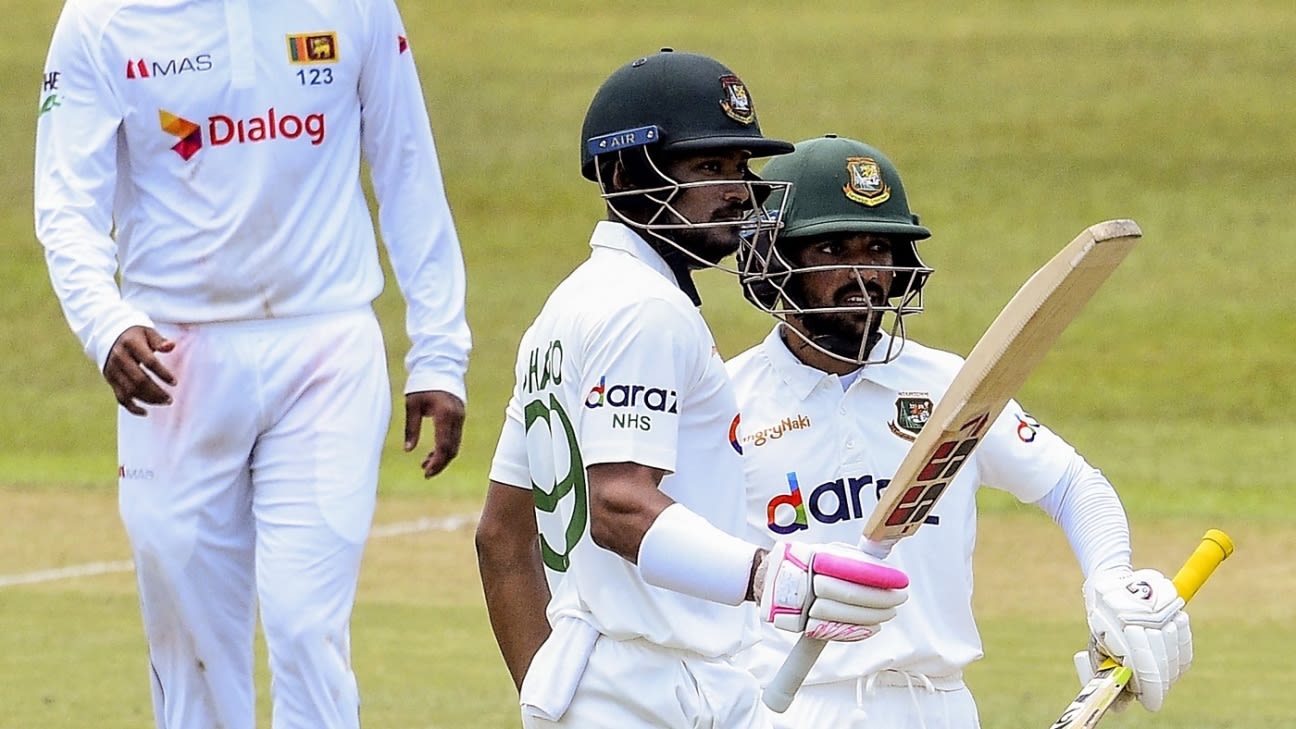 Bad light ate away the last 90-odd minutes of play on the second day, leaving Bangladesh very much in control with 474 on 4 on the board, even though they hardly moved the run-rate needle with their 172 runs in 65 overs on the day. On a pitch where bowlers have found almost no joy, the Bangladesh batters haven’t shown any interest in forcing the pace, or get to a position where they can declare.

Sri Lanka wouldn’t mind putting their feet up after nearly two full days out in the field in searing heat and humidity. In fact, the extra minutes in the shade could even be advantageous for them, as it takes away more time on a pitch that might grip and turn a bit more on the remaining days.

On the day, Najmul Hossain Shanto and Mominul Haque continued to be Bangladesh’s batting stars, the former taking his maiden Test century to 163, while Haque reached his first overseas hundred.
Shanto struck 17 fours and a six during his eight hours and 53 minutes at the crease, with most of those boundaries coming in the arc between point and mid-off. He took a liking to Dhananjaya de Silva‘s offspin, hitting him for eight boundaries while he was generally watchful against the pace trio of Suranga Lakmal, Vishwa Fernando and Lahiru Kumara, who eventually sent him back caught and bowled. Shanto and Haque added 242 runs, a record for Bangladesh’s third wicket, after Shanto and Tamim Iqbal had put on a brisk 144 for the second wicket on the first day.

Haque was caught at slip trying to force a drive off de Silva not long after Shanto’s fall. This was an important knock for the Bangladesh captain, who held the record for scoring most Test hundreds without getting a single one of them away from home – it was 10/0 before this one. Haque was more inclined towards picking the gaps around point and cover – most of his 11 fours came through point and cover – while he dealt mostly in singles when it came to the leg side.

Mushfiqur Rahim took his time to get going after coming in following Shanto’s fall. A Sri Lankan review for lbw off Kumara first ball went in his favour courtesy an inside edge, and he had one overturned not long after when given out lbw by umpire Kumar Dharmasena off Wanindu Hasaranga. But he settled down to end the day unbeaten on 43 off 107 balls. Liton Das was with him on 25 off 39 balls with two fours and a six.

Vishwa had taken two wickets on the first day, and on the second, there was one each for de Silva and Kumara, just rewards for the young fast bowler who hit decent speeds for most of the day. Lakmal and Hasaranga were both impressive in terms of staying disciplined, but they went wicketless in 64 overs combined.