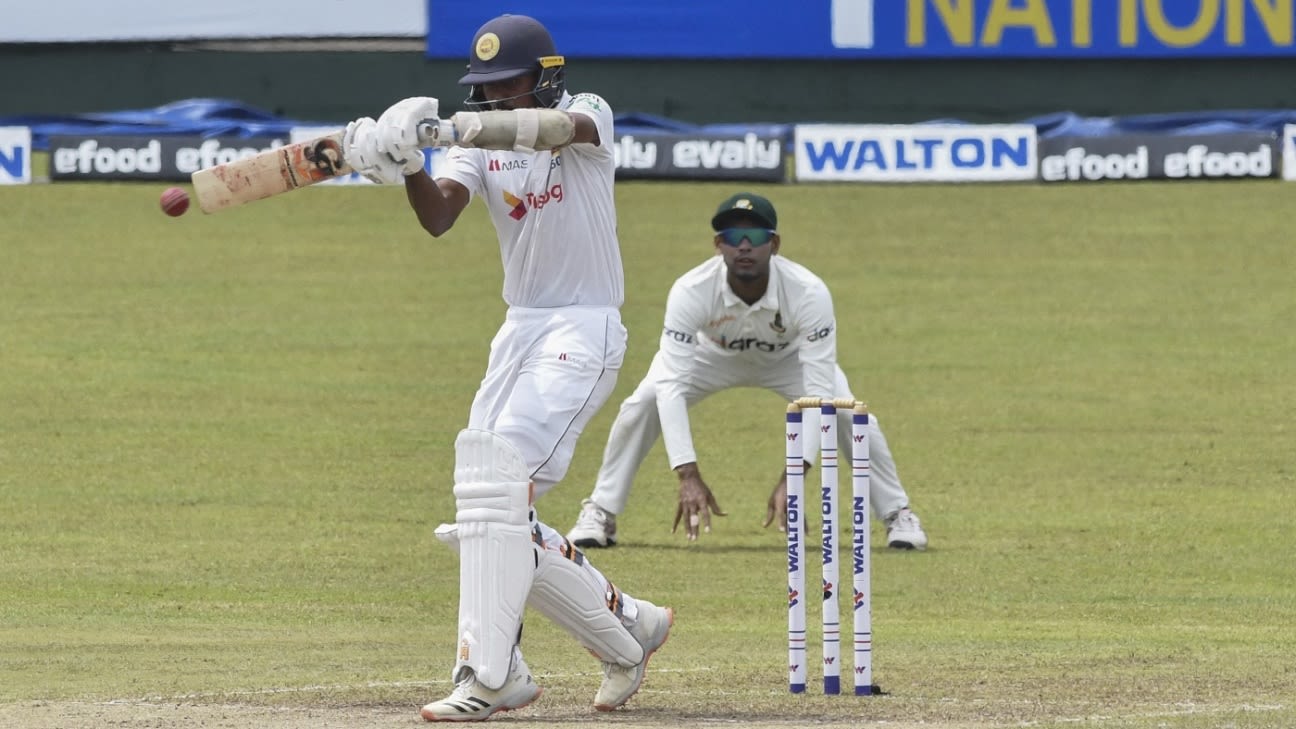 Bangladesh had their best bowling day in Sri Lanka on the second day of the second Test in Pallekele, yet it wasn’t enough to sniff out the 87-run seventh wicket stand. Niroshan Dickwella and Ramesh Mendis led the recovery for the home side who finished at 469 for 6 at stumps, having batted quite sedately for the majority of the second day while also losing five wickets.

Play was suspended twice in the post-tea session – first for about 20 minutes due to a light drizzle and then at 4.15pm due to bad light. But the day was later called off at 5.04pm with Dickwella unbeaten on a run-a-ball 64 with seven fours and his partner Mendis on 22.

Bangladesh had a chance to break the partnership after the first break in play, but Najmul Hossain Shanto dropped Mendis at second slip. That was the second sitter he had dropped in this match. He had earlier put down Dimuth Karunaratne on the first day when the Sri Lanka captain was on 28, and he ended up making 118. Both dropped catches were off Taskin Ahmed, who could have improved his already impressive performance.
Ahmed started Bangladesh’s revival with two accurate spells in the morning session, having Lahiru Thirimanne caught down the leg side on 140, who added just nine runs to his overnight score. Ahmed next got Angelo Mathews caught behind, with Liton Das diving well to his right to complete the catch. Mathews survived a caught-behind off his third ball – also off Ahmed – since none of the Bangladesh fielders heard the edge while replays later showed the spike.

Ahmed hardly gave away anything, as he combined well with fellow seamers Shoriful Islam and Abu Jayed for 18 of the 26 overs in the first session, when Sri Lanka managed only 43 runs. When Dhananjaya de Silva fell to Taijul Islam shortly before lunch, Sri Lanka had lost three wickets for 15 runs inside eight overs.

Oshada Fernando and Pathum Nissanka then added 54 for the fifth wicket before they fell within five balls after lunch. Nissanka, who was dropped on 10, fell to a sharp incoming delivery from Ahmed. Fernando made 81 off 221 balls with eight fours, before being caught down the leg side as wicketkeeper Das anticipated a predetermined lap-sweep off Mehidy Hasan Miraz to smartly move to his left and complete the catch.

However, the rest of the day belonged to Dickwella, as he counterattacked Bangladesh with a combination of sweeps, cuts and drives. Mendis, though, was mostly defensive, though he did smash Shoriful Islam for a four down the ground.

It was a welcome change of pace for Sri Lanka who looked to be following their first day mantra of a slow start, and then raising their run-rate in the second session. Ahmed and the rest of Bangladesh bowlers, however, didn’t allow them this comfort this time, picking wickets at regular intervals.