India itself is a proving ground of development – our development journey can offer many templates to other developing countries.

On the bilateral India-Sri Lanka front, the cooperation on renewable energy, climate change and sustainable development files is robust and mutually beneficial. During the virtual bilateral summit between Prime Minister Narendra Modi and Prime Minister Mahinda Rajapaksa in September 2020, the two leaders agreed to deepen cooperation in renewable energy with particular emphasis on solar projects under the US$ 100 million Line of Credit from India. 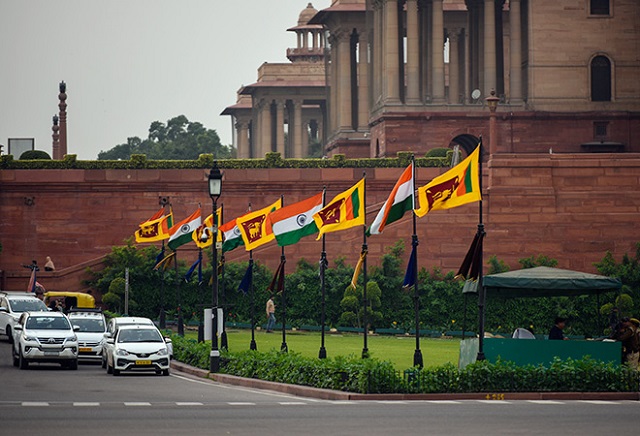 Then on 16 June 2021, the agreement in this regard between the Government of Sri Lanka and the Export-Import Bank of India, was exchanged by the High Commissioner of India to Sri Lanka, H.E. Mr. Gopal Baglay and the Secretary to the Treasury, Mr. S.R. Attygalle, in the presence of

Sri Lankan President Gotabaya Rajapaksa. President Gotabaya Rajapaksa and High Commissioner of India discussed the striking similarity in the national objectives outlined by India and Sri Lanka in connection with solar energy. Over the past 7 years, solar power generation in India has increased significantly to reach 34.6 GW in 2021 from about 2.6 GW in March 2014. The National Solar Mission of India aims to increase it further to 100 GW and beyond.

In line with India’s Neighbourhood First policy, responding to disasters and crises has been an integral part of our commitment to mitigate the environmental impact of these events. It may be recalled that a potentially huge oil spill was averted with assistance from India after MT New Diamond with 200,000 metric tons crude oil on board caught fire off Sri Lanka’s Eastern Coast in September 2020.

Three Indian Naval Ships rushed with assistance following the floods in Sri Lanka in May 2017. More recently, in May 2021, India promptly responded to an emergency request by Sri Lanka Navy and deployed multiple assets (vessels Vaibhav, Vajra and Samudra Prehari by Indian Coast Guard and Tug Water Lilly by Director General, Shipping in addition to Dornier aircraft for aerial reconnaissance) to douse the fire on MV X Press Pearl off Colombo. Then in June and July, Indian Naval Ship (INS) Sarvekshak completed 800 miles of Survey in the vicinity of the ill-fated MV X-Press Pearl.

India’s flagship development cooperation initiatives in the Island which stand at close to US$ 3.5 billion are based on sustainable practices. The predominant usage of locally available construction and other material ensure that the carbon footprint of the various projects (like the 1990 Suwaseriya Ambulance, Indian Housing Projects, Model Village Housing projects, and others like hospitals, schools etc.) is minimal and the construction practices employed are environment friendly.

This applies as much to the 21 High Impact Community Development Projects under Indian grant assistance all across the Island in fields which relate chiefly to socio-economic development, livelihood support, conservation of environmental and cultural heritage, empowerment of women, child welfare and facilitation of community life, particularly through the creation of infrastructure in the education, health, agriculture or community development sectors.

Another summit on global climate change

The international community concluded yet another summit on global climate change in Glasgow on 13 November 2021 and adopted a package that reflected a delicate balance between the interests and aspirations of the nearly 200 Parties that were involved in the compromise. According to the official press releases of the COP26, the Glasgow Climate Pact kept alive the target of global warming below 1.5°C this century-another compromise agreed at Paris in 2015.

A key outcome was the conclusion of the so-called Paris rulebook on the fundamental norms related to Article 6 on carbon markets, which will make the Paris Agreement fully operational. Further, a work programme to define the global goal on adaptation, which will identify collective needs and solutions to the climate crisis already affecting many countries was another highlight. There was minimal progress on the financing pledge of providing 100 billion dollars annually from developed to developing countries.

Parties were encouraged to strengthen their emissions reductions and to align their national climate action pledges with the Paris Agreement. All countries agreed to revisit and strengthen their current emissions targets to 2030, known as Nationally Determined Contributions (NDCs), in 2022. This will be combined with a yearly political roundtable  to consider a global progress report and a Leaders summit in 2023.

Reflecting on the task ahead, COP26 President Alok Sharma from the UK said, “We can now say with credibility that we have kept 1.5 degrees alive. But, its pulse is weak and it will only survive if we keep our promises and translate commitments into rapid action.” The UN Secretary General, Antonio Guterres alluded to the fact that in reaching the Glasgow Climate Pact ‘the collective political will was not enough to overcome some deep contradictions’ and listed out the goals that were not achieved at the conference, including a price on carbon, building resilience of vulnerable communities against here and now impacts of climate change and making good on the $100 billion climate finance commitment to support developing countries.

Yet, there were some positive take-aways from Glasgow that lifted up the mood of the right-thinking global citizens and organisations that are assiduously following the international negotiations on one of the primary global challenges. In particular, India’s ambition and commitment to combating climate change was on full display.

In the national statement by Prime Minister Narendra Modi on 2 November, he said that he came from a culture that gave the message of ‘Sarve Bhavantu Sukhinah’, which means Happiness for All and hence Paris (2015) ‘as not a summit, it was a sentiment and a commitment.’ Despite being 17% of the world’s population, whose responsibility has been only 5 per cent in emissions, India has left no stone unturned to show that it has fulfilled its obligation. Prime Minister Modi asserted, “Today, India ranks 4th in the world in installed renewable energy capacity.

India’s non-fossil fuel energy has increased by more than 25% in the last 7 years and now it has reached 40% of our energy mix. Every year more passengers travel by Indian Railways than the population of the world. This huge railway system has set a target of making itself ‘Net Zero’ by 2030. This initiative alone will lead to a reduction of emissions by 60 million tonnes annually. Similarly, our massive LED bulb campaign is reducing emissions by 40 million tonnes annually.

Today, India is working at a faster pace on many such initiatives with a strong will. Along with this, India has also given institutional solutions to cooperate with the world at the international level. As a revolutionary step in solar power, we initiated the initiative of International Solar Alliance. We have created a coalition for disaster resilient infrastructure for climate adaptation. This is a sensitive and vital initiative to save millions of lives.”

In terms of future steps and concrete actions, Prime Minister Narendra Modi presented to the international community, the ‘Panchamrit’ or the five nectar elements to deal with the climate change challenge. There were: first, that India will take its non-fossil energy capacity to 500GW by 2030; second, India will meet 50 per cent of its energy requirements from renewable energy by 2030; third, India will reduce the total projected carbon emissions by one billion tonnes from now till 2030; fourth, by 2030, India will reduce the carbon intensity of its economy by less than 45 per cent; and fifth, by the year 2070, India will achieve the target of Net Zero. In addition, the Prime Minister emphasised the imperative of the transfer of climate finance and low-cost climate technologies and made clear Indian expectation that developed countries should provide climate finance of $1 trillion at the earliest.

Earlier, in his address at the session II of the G20 Summit in Rome on 31 October, Prime Minister Modi presented his views about two major responsibilities, namely climate mitigation and climate justice. He referred in particular to success in going beyond ambitious goals like 175 GW of renewable energy, rehabilitation of 26 million hectares wastelands, target for Indian Railways to mitigate carbon emission by 60 million tons per annum, 20% ethanol blending in petrol by 2025 etc.

He also suggested three action points for the G20 that include creating: (a) a ‘clean energy projects fund’, which can be used in countries where peaking has not happened yet, (b) a network of research institutions working on clean-energy in G20 countries which will work on new technologies as well as their deployment related best practices, and (c) an institution to create global standards in the field of green hydrogen to encourage its production and use.

In conclusion it can be said that in the days and years to come, the salience of climate sensitive approaches and practices in trans-national cooperation initiatives is bound to increase. In responding to the need of the times, the Government of India is resolved to always adopt relevant and contemporary practices. Echoing this imperative, Prime Minister Narendra Modi said at the session III on sustainable development of the Rome G20 Summit on 31 October, “India has a vast experience of South-South Development Cooperation.

India itself is a proving ground of development – our development journey can offer many templates to other developing countries. Whether it is digital connectivity, financial inclusion or immunization of children, India has certified ‘at scale’ solutions. India is always ready to share these solutions with other developing countries. We have made many of our digital solutions open source and they are available to the entire humanity.”