The U.S. blockade of Cuba fuels the fire that rages on in the country, despite denials by authorities in the United States.

On August 5, a major oil storage facility in Matanzas, Cuba, 65 miles east of Havana, was hit by lightning. A tank that contained 25,000 cubic meters of crude oil caught fire after being struck. Since then, an enormous fire has been raging in Matanzas. Lieutenant Colonel Alexander Ávalos Jorge, deputy head of Cuba’s fire department, said that it was impossible to estimate when the fire would be completely extinguished. This tremendous explosion and hard-to-control fire has led to several people being reported missing (including firefighters), many others injured with severe burns, and hundreds more evacuated from their homes. Cuba’s president, Miguel Díaz-Canel, rushed to Matanzas on August 6, interacted with the local officials who were trying to get the fire under control, met residents of the town, and the next day, interacted with the press and spoke about the heroic work done by the firefighters and the solidarity of the Cuban people. “We are going to overcome this adversity,” he said. 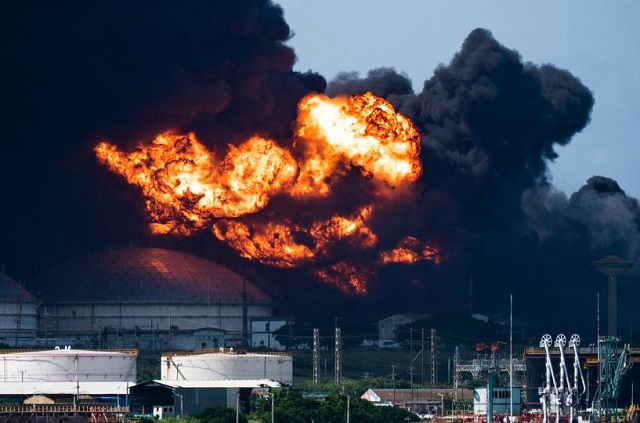 Four of the eight tanks at the storage facility have been impacted by these fires. By August 8, Matanzas Governor Mario Sabines Lorenzo also confirmed that three tanks had been compromised. Clouds of dust now hover over the island. Elba Rosa Pérez Montoya, Cuba’s minister of Science, Technology, and Environment (CITMA), said that scientists from various backgrounds were monitoring the situation to see if the smoke resulting from the fire will lead to any negative health effects for the residents of the surrounding areas. As of that point, she said, “We have no evidence that there are effects on human health.” Nonetheless, strange substances have been detected in the water supplies in Yumurí Valley, Matanzas. Diosdado Vera, an 89-year-old farmer, showed journalist Arnaldo Mirabal Hernández the unusual color and odor of the water in an old bathtub that serves as the water source for her cows. “There are approximately 3,200 particles in the air right now,” said CITMA Minister Pérez Montoya. “The clouds have sulfur dioxide, nitrogen dioxide, carbon monoxide, among other substances that are falling on Matanzas, Mayabeque, and Havana.” Meanwhile, Pérez Montoya said that a team of scientists is investigating the strange substances found in the Yumurí Valley.

This tragedy has also had immediate repercussions for the entire population in the province of Matanzas and the whole island of Cuba since it affects their electricity supply and access to health care, which already are strained under the weight of the U.S. blockade, due to lack of availability of spare parts and scarcity of medicines in Cuba, respectively.

The fire has already led to the Antonio Guiteras thermoelectric plant in Matanzas being out of service due to a shortage of water and the contamination of the water cycle. This will likely lead to severe electricity outages amid record heat waves this summer. Ricardo Ronquillo Bello, president of the Union of Cuban Journalists (UPEC), tweeted that this tragedy will be “another test for Cuban journalism that will know how to honor with its humanism and social responsibility.” Ronquillo was referring to the onslaught of fake news that swept through social media, leading to a sense of alarm during an already difficult period.

In this dire crisis, the people of Cuba and their government have responded immediately, and this has resulted in on-site efforts to contain the fire, prevent a major environmental disaster, and keep the population safe. It has also led to a call for international aid and solidarity. The governments of Mexico, Venezuela, Russia, Nicaragua, Argentina, Chile and several others have promptly offered material aid, and some countries like Mexico and Venezuela have also sent experts and firefighters to confront this complex situation. Cuba’s Credit and Commerce Bank (Bandec) has set up an account so that people in the country can donate money to the people of Matanzas.

“Cuba is Matanzas,” said President Díaz-Canel, in the context of both the impact of the fire on the entire island and the solidarity that is visible across Cuba.

The U.S. blockade of Cuba fuels the fire that rages on in the country, despite denials by authorities in the United States. The U.S. government has both been stiffening up the blockade of Cuba and denying that sanctions have any impact on the functioning of the country (in fact, in 2021, then-White House press secretary Jen Psaki had said that the problems in Cuba are not due to the U.S. sanctions but rather are due to “the Cuban government’s economic mismanagement”). The U.S. Embassy in Havana has made assurances that the blockade authorizes U.S. entities and organizations to provide disaster relief and response. But organizations tell us that this is not the case, with the 243 sanctions imposed on Cuba working as a stranglehold against pursuing any activity in the country. Many of these organizations say that the process to send aid to Cuba is lengthy, with a licensing regime in place that requires expensive lawyers. Cuba’s inclusion in the state sponsors of terrorism list means that banks in both the United States and abroad are reluctant to process humanitarian donations.

While Washington says one thing and does another, the firefighters in Matanzas—aided by the reinforcements from Mexico and Venezuela—have been spraying foam on the fire to prevent it from spreading further, and helicopters have been pouring water on the other oil tanks to stop them from combusting. Even after the fire settles and the ashes remain, Cuba will struggle to rebuild these tanks and to solve its energy crisis. These are not merely domestic problems but rather are problems created and exaggerated by the harmful U.S.-imposed blockade that has been in existence for the past six decades.

Not long after the lightning strike, users on social media shared the hashtag #FuerzaMatanzas (be strong, Matanzas) on various platforms. Within 24 hours, the hashtag was shared by nearly a billion users, according to Dayron Avello, social media manager at Clínica Internacional Camilo Cienfuegos. A billion people have signaled their support for Cuba, a solidarity the U.S. blockade is unable to prevent.

Vijay Prashad is an Indian historian, editor and journalist. He is a writing fellow and chief correspondent at Globetrotter. He is an editor of LeftWord Books and the director of Tricontinental: Institute for Social Research. He is a senior non-resident fellow at Chongyang Institute for Financial Studies, Renmin University of China. He has written more than 20 books, including The Darker Nations and The Poorer Nations. His latest books are Struggle Makes Us Human: Learning from Movements for Socialism and (with Noam Chomsky) The Withdrawal: Iraq, Libya, Afghanistan, and the Fragility of U.S. Power.

Manolo De Los Santos is the co-executive director of the People’s Forum and is a researcher at Tricontinental: Institute for Social Research. He co-edited, most recently, Viviremos: Venezuela vs. Hybrid War (LeftWord Books/1804 Books, 2020) and Comrade of the Revolution: Selected Speeches of Fidel Castro (LeftWord Books/1804 Books, 2021). He is a co-coordinator of the People’s Summit for Democracy.