No amount of document signing is going to fix imperialism. US imperialism is so much bald-faced!

Cuba – a country of eleven million people – is living through a difficult crisis due to the growing scarcity of food and medicine. Recent protests have drawn the world’s attention to this. It’s unconscionable, especially during the Covi-19 pandemic, to intentionally block remittances and Cuba’s use of global financial institutions, given that access to dollars is necessary for the importation of food and medicine. 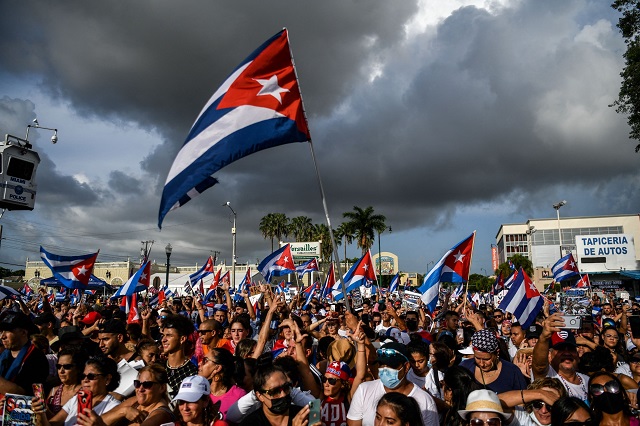 Former US President Donald Trump added 243 new sanctions to tighten more than six decades-long US economic blockades of Cuba. Imposed shortages of basic goods have created grave suffering throughout the island. Covid-19 too has severely damaged Cuba’s tourism industry. The US wants to topple the Cuban revolution but supporters of the revolution are fighting back.

No amount of document signing is going to fix imperialism. US imperialism is so much bald-faced!

America wants democracy, but make a country suffer …lift embargo … and let Cuba be free and stop the tyranny and competition of ruling the world … that type of tactics are no longer accepted in Latin America or Caribbean Countries stop the oppression and let Cuba live according to its own choice.

The Building and Woodworkers’ International (BWI), representing 12 million workers worldwide, supports a United Nations Resolution passed by 184 countries on 21 June urging the United States to end its nearly 60 years of economic embargo against Cuba.  BWI also joins the international community in calling US President Joe Biden to immediately revoke 243 new blockade measures implemented by the Trump administration, including the more than 50 measures which were imposed at the start of the COVID-19 pandemic.

The fact that the UN has been calling for the lifting of the embargo for more than three decades’ points to its inexpediency. The United States’ continuing economic embargo imposed on Cuba, especially within the context of a raging pandemic, is unjust, inhumane and downright cruel. The US government’s insistence on this blockade amidst a global health crisis doesn’t advance the rights and welfare of the Cuban people, and democracy in general. It is only abetting the pandemic and causing needless suffering.

BWI understands the legitimate grievances expressed by sections of the Cuban population, especially by young people, to their government’s response to the pandemic, which unfortunately, was severely undermined by the US embargo. The Cuban people, like the rest of us, deserve the best medical services to protect themselves from COVID-19.

Thus, BWI calls on the Biden administration to heed the call of the international community to lift the embargo and let Cuba live. Where his predecessors have failed, President Biden has the unique opportunity to deliver by ending the embargo and leaving behind a legacy of solidarity and healing between the two countries.

BWI also joins the international trade union movement as they express their support for the Cuban trade unionists and workers who bear the brunt of the immoral blockade. Wherever and whenever workers are suffering and oppressed, it is incumbent on trade unions to act.

Lastly, BWI expresses its working-class solidarity to the Cuban people, particularly the trade unionists and workers under the National Union of Construction Workers of Cuba (SNTC) and the Workers’ Central Union of Cuba (CTC) as they carry on despite the overwhelming challenges.

We recognise the Cuban people’s international effort to help stop the spread of the pandemic by sending their best doctors and nurses to countries where they are needed despite their own domestic needs. This extraordinary act of selflessness and solidarity did not go unnoticed. The global trade union movement pays tribute to this by amplifying, more than ever, the call for the immediate and unconditional lifting of the US embargo against Cuba.

More than 400 personalities from the US and the world signed an open letter to President Joseph Biden demanding the end of the blockade against Cuba. But an old adage has rightfully reminded us, “The devil would not listen to the Scriptures.” Join with over 400 leaders and activists around the world and tell Joe Biden to immediately lift Trump’s 243 sanctions on Cuba. End the Blockade!

Workers of the world, unite! Lift the embargo against the Cuban people! Let Cuba live!

Thousands of Cubans took to the streets in defense of their revolutionary government on a regular basis as President Miguel Díaz-Canel vowed to defend the country from outside interference. “We are going to put our hearts into Cuba — together we can — because Cuba is love, peace, and solidarity,” he said.

Demonstrations took place in the capital Havana and other cities in a rejection of the messages circulating on social media aimed at destabilizing the country.

Díaz-Canel denounced the “unconventional warfare” being waged against Cuba: a reference to the social media campaign using the hashtag #SOSCuba, which has its origins in the United States and organizations linked to the shady National Endowment for Democracy, as reported in the Morning Star recently.

It is part of efforts to present a picture of Cuba to the world that “is a lie,” he said, adding that “imperialism tried to silence any information about the true reality of our country.”

International media have reported on growing unrest in Cuba in the face of an economic crisis and shortages of vital medical equipment to deal with the coronavirus pandemic.

But they have studiously ignored mass support for the government and calls for an end to the US-imposed blockade that has cost the Cuban economy some US$754 billion (£547bn) since it was imposed in 1959.

U.S. President Joe Biden’s professed support for the Cuban people has been dismissed as opportunism, as he refuses to end the devastating embargo — the U.S. voted against a motion calling for it to be lifted at the United Nations general assembly last month.

And U.S.-led calls for humanitarian aid have also been rejected, with Biden attaching strings to any offers of support as he labeled Cuba “a failed state.”

Youth Communist League spokesman Aylin Alvarez warned that “the revolutionary Cuban people do not believe in false humanitarian aid that brings with it foreign interference,” while the Cuban government continues to press demands for an end to the blockade.

Despite countless efforts in more than six decades, including invasion and hundreds of attempts to assassinate late leader Fidel Castro, the U.S. has failed to overthrow the Cuban government.

Last week Miami Mayor Francis Suarez called for U.S. military intervention, including air strikes against Cuba. But Foreign Minister Bruno Rodríguez said that Cuba’s enemies should not underestimate the determination of its people. He further added, “Those who question the loyalty and support of millions of Cubans to their revolution ignore the tradition of struggle and victory of an entire people, who will not let the freedom, sovereignty, and independence … be taken away.”

And let CUBA Flag of Cuba dictate its future.

BASL ‘deeply disturbed at the alleged criminal conduct’ of Ratwatte

Kohli to step down as T20 captain after World CupDr. Jayaruwan Bandara seeks for 14 days to appear before CID28 persons at a funeral test positive for Covid-19Pahanthudawa clip uploaded by a female – Police